*
The scheme created by government years back and referred to as the Co-operative Incentive Scheme” (CIS).   It is a B-BBEE scheme.    Different stakeholders decided to support the Noga’s Post community with this development project after the community successfully produced maize and vegetables during the previous planting season. 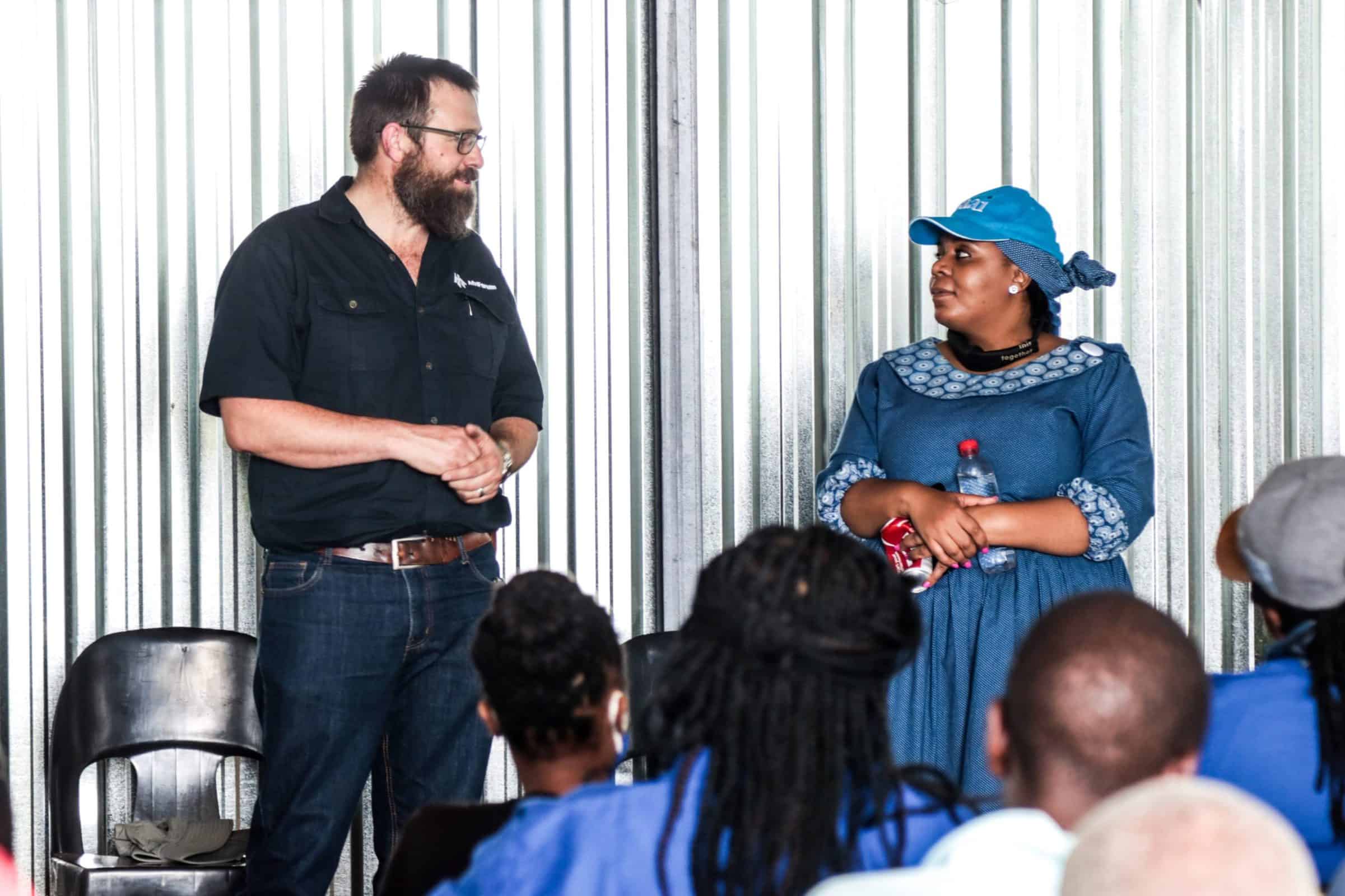 The Boiphitlhelelo Co-operative was established in 2017 to benefit from the one-household-one-hectare programme of the Department of Agriculture, Land Reform and Rural Development. 36 households originally joined the cooperative and under the leadership of Kgosatsana (Princess) Gabo Moroka, traditional leader of Noga’s Post, managed to plant, on own initiative, an additional 20 hectares of maize and vegetables on top of the 36 hectares planted by the Department during the 2019/2020 planting season. Many community members also produced food from their own gardens. The vegetables and maize produced ensured the availability of food in the community during the difficult months of lockdown.

“We worked very hard to change the mindset of the community members of Noga’s Post to have hope again and to work to ensure food security and a better future. I am so proud of the achievements of the community and thankful that other stakeholders decided to join our project so that it can be an even bigger success. This initiative is an example of what we mean with peaceful coexistence and cooperation. I consider this cooperation as a continuance of the good relationship that started in the time of my ancestor, Kgosi Moroka II, in 1836,” says Kgosatsana Gabo Moroka, Spokesperson of the Boiphitlhelelo Co-operative and traditional leader of the community.

“It is so inspirational to work with the community. They are very passionate about the project and have big dreams for the future. For Pioneer it is a privilege to be involved with this project through, amongst others, the donation of the best quality seed that will contribute to make an even bigger success of this project,” says Charles Matlou, Smallholder Farmer Development Manager at Pioneer Hi-Bred RSA.

“As a family farmer network it is important to Saai that people that want to be commercial farmers, be supported to develop agriculturalists that can not only create wealth for themselves but also contribute to food security in the country. Here at Noga’s Post there are families that want to farm, and that is why we are involved with our implementation partner, Agri All Africa,” says Dr Theo de Jager, Board Chairperson of Saai.

Agri All Africa coordinates the commercial farmers of the area that is involved with the project. These farmers act as mentors for the community members and also lend support with the supply and use of equipment.

“To AfriForum it is a great joy to be involved with this community project. They proved that they want to be self-sufficient and that they are willing to work to create a better future for their children. A future where we can be free, safe and prosperous is possible through mutual recognition and respect and cooperation between different cultural communities and stakeholders. This project is an excellent example of this,” says Barend Uys, Head of Intercultural Cooperation at AfriForum.

Gerda Kotzé of Purposely Ignited provides support with the coordination of the various stakeholders, while Mike Bosch of Boschveld Free Range Chickens also donated chickens to the co-operative. Lowveld Agrochem provided seed packs for the home vegetable gardens in the community and also supports the larger agricultural project with other means. The local Agrico branch in Bloemfontein contributes by designing the water reticulation and irrigation systems for the Boiphitlhelelo farming project with the aim to specify the optimal irrigation for each crop and area to be irrigated in order to maximise yields and profit.

One hectare – one household – started :

The Co-operative Incentive Scheme (CIS) is a 90:10 matching cash grant for registered primary co-operatives. A primary co-operative consists of five or more members who are historically disadvantaged individuals.   The objective is to improve the viability and competitiveness of co-operative enterprises by lowering their cost of doing business through an incentive that supports Broad-Based Black Economic Empowerment.

The objective of the grant is to improve the viability and competitiveness of co-operative enterprises, by lowering their cost of doing business through an incentive that supports Broad-Based Black Economic Empowerment (BBBEE).

The maximum grant that can be received is R 350 000. The co-operative must have majority black ownership. Please note that “sin” industries (gambling, tobacco etc.) are excluded. Acquiring building, tendering costs and operation costs are also excluded.

What can be funded by the grant:

Primary co-operatives can now access funding of up to R1.5 million, thanks to a Department of Small Business Development’s programme.

The Co-operatives Incentive Scheme (CIS) helps co-operatives access funding, provided they meet a certain criteria.     The department said one of the requirements is that entities must be incorporated and registered in South Africa in terms of the Co-operatives Act of 2005.

The scheme is also said to be more favourable towards women, youth and people with disabilities.

The department added that people who are historically disadvantaged, have projects in any of the  economic sectors, have emerging co-operatives with a majority black ownership and adhere to co-operative principles have a better chance of accessing the scheme.    Co-operatives that want to apply for funding can download an application form from the department’s website.

Due to limited funding, prioritisation will be given to those co-operatives that demonstrate the potential to sustain jobs, eventually create more jobs, promote economies of scale and scope and contribute to community development.

The scheme offers a minimum of R400 000 and a maximum of R1. 5 million in funding to each co-operative.

One Household, One Hectare programme on track

The One Household, One Hectare programme is about creating viable small to medium rural agricultural enterprises – and about restoring dignity.

Since it was launched nearly two years ago, the One Household, One Hectare programme has benefitted thousands of households across the country.    Driven by the Department of Rural Development and Land Reform, the programme’s aim is to eradicate poverty and create a class of black smallholder farmers, producers and agro-manufacturers.

In a recent parliamentary briefing by the department, it was stressed that the One Household, One Hectare initiative is important for job creation and inclusive growth in agriculture. It will also help government achieve equity in land ownership, access and tenure security.

So far, 6 683 households from 182 sites across the country have benefitted from the department’s various initiatives. About 10 500 households are expected to benefit from the One Household, One Hectare programme alone.

The department set aside R100 million for the first year of the programme through its Recapitalisation and Development Budget.

When the Minister of Rural Development and Land Reform, Gugile Nkwinti, handed over 14 hectares of land to the first recipients of the programme at Kenton-on-Sea’s Gorah Agribusiness and Multipurpose Cooperative in 2015, he said his aim was to bring back the dignity of people living in rural areas and transform the rural economy.

Since then, the cooperative – based in the Eastern Cape’s Ndlambe Local Municipality – has managed to secure contracts with Pick n Pay and a Port Elizabeth fruit and vegetable market to sell its produce at the local outlets.

The minister also dicovered during a site inspection last year that the community intends to invest 20 per cent back into the farm and diversify into livestock.

He was pleasantly surprised to find that the beneficiaries were harvesting crops of potatoes and pumpkin even though the country had been experiencing a severe drought.

All the beneficiaries of the One Household, One Hectare programme receive a certificate to be used as collateral or surety if they want the bank to help them. However, neither the land nor the certificate can be sold because the land belongs to the state.

WHERE DOES THIS FUNDING CAME FROM –  THE CIS SCHEME

Over the last two decades, various grant schemes for co-operative enterprise have been implemented in both developed and developing countries, and South Africa is no exception. According to Dupont and Martin (2006), some of these grant schemes are non-repayable grants, interest-free and subsidised equity participation incentive schemes, which is seen as some of the most adopted tools in developing countries. Assessing the effectiveness of these financing tools is an essential step to orientate policy- and decision-makers on how best they could optimise the use of taxpayers’ money for such purposes (Cerqua & Pellegrini, 2014). The fundamental premise underpinning the establishment of the CIS in South Africa is firstly a need for additional investment to foster more rapid economic growth in South Africa; and, secondly, the idea that an incentive scheme can be effective in stimulating public investment in communities where economic activity is stagnant (Department of Trade and Industry [DTI], 2007).

The Co-operative Incentive Scheme (CIS) is a 100% grant for registered primary co-operatives (a primary co-operative consists of five or more members). The objective of the CIS is to improve the viability and competitiveness of co-operative enterprises by lowering their cost of doing business through an incentive that supports Broad-Based Black Economic Empowerment.

ELIGIBLE ACTIVITIES THROUGH THE GRANT:

This scheme is for cooperatives formed with five or more black members. A co-operative is a body of people who come together for mutual benefit either in a social, economic or cultural way. This scheme aims to promote cooperatives on a 90:10 cash basis grant by assisting cooperatives to meet their start-up requirements. The maximum amount that this scheme offers is R350 000.

This scheme is offered to cooperatives incorporated and registered in the Republic of South Africa (RSA) that are operating in emerging sectors within rural and semi-urban areas whilst abiding by the principles of cooperatives. This scheme is biased towards woman, youth and disabled individuals. Significant emphasis has been placed on this area by DTI.

It is in order to focus on B-BBEE but it is wrong to have white nationalism for the small minority group of peoples.   They also have a mandate from their members to do this.

One Household One Hectare – Committee Parliament