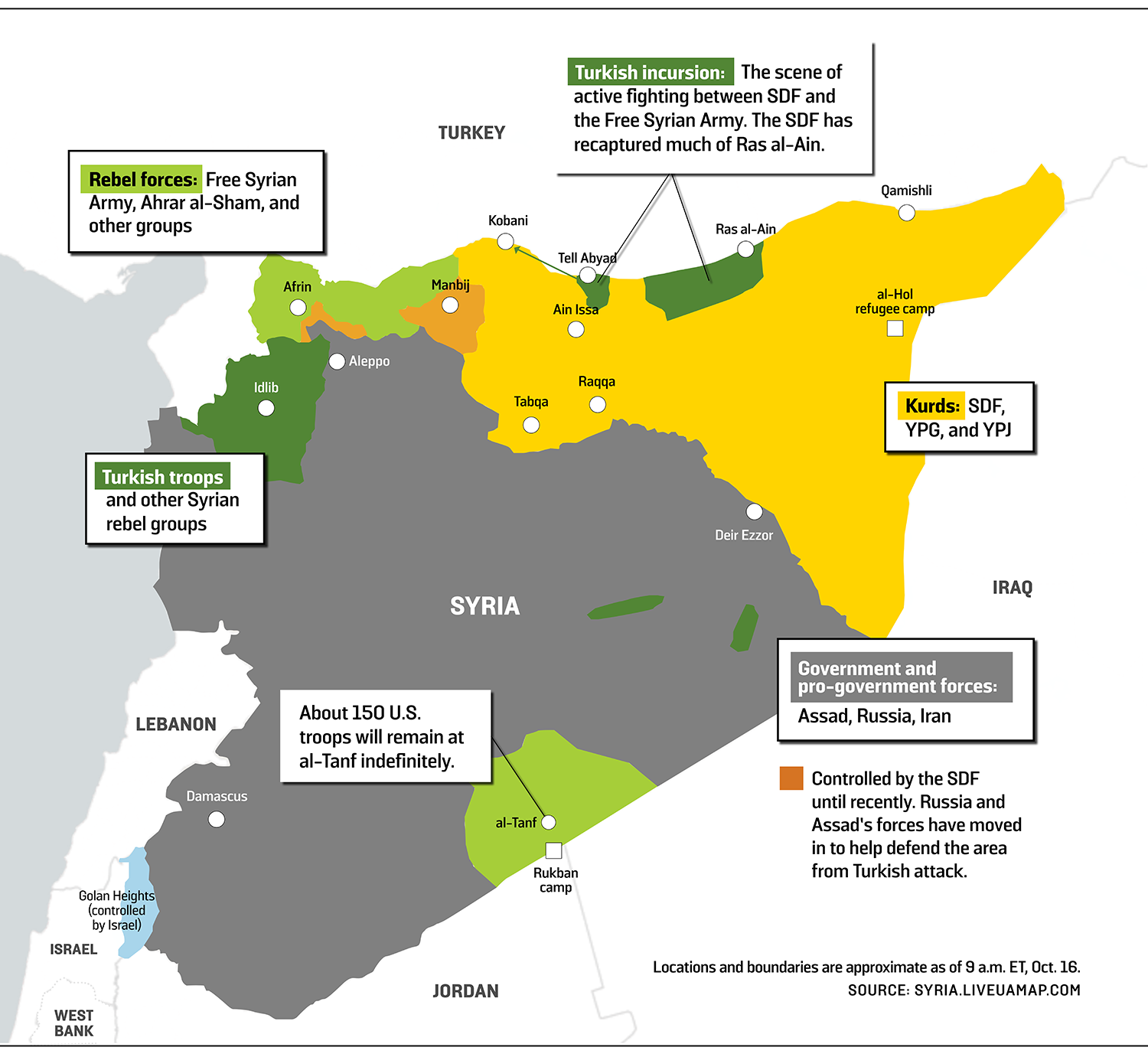 Why the Turkish invaded parts of Syria and abandoned the Kurdish people wherever?

There is ongoing fighting within the “safe zone” along the Turkish and Syrian border in an area that remains a stronghold of the Syrian Democratic Force. Former Special Presidential Envoy for the Global Coalition to defeat ISIS Brett McGurk joins Ali Velshi to discuss the developments of the ceasefire in Northern Syria and the Secretary of Defense’s warning about the Syria invasion. Aired on 10/24/19.

Civilians are fleeing northern Syria as Turkish troops advance in Kurdish-controlled areas. The offensive was made possible by the withdrawal of US troops. It has opened a new front in Syria’s eight-year-old war. So, who are the key players in this particular conflict and what are their goals? Let’s begin with Turkey: Ankara wants to establish a so called “safe zone” along its border stretching about 30 kilometers into Syria territory. This area is currently controlled by Kurdish militias. Turkey wants to clear it of Kurds – and then resettle some two million Syrian refugees there who are currently living in Turkey. Then there are the Syrian Kurds. Groups like the Kurdish People’s Protection Units or YPG want autonomy. The latter fought alongside the US AND Turkey against the so-called Islamic State. But Ankara’s offensive could now force Kurdish militias to throw in their lot with the Syrian government and its Russian and Iranian allies. And there is the US. The main goal of the United States and its allies was to defeat Islamist forces in Syria, like ISIS. Washington says ISIS has now been defeated and has started withdrawing its troops from north-eastern Syria, clearing the way for the Turkish offensive.

Kurdish fighters and civilians began evacuating from a besieged Syrian town on 20 October 2019.   It was the first pullback under the U.S.-brokered cease-fire deal, opening the way to a broader withdrawal of the Kurdish-led forces from parts of the Turkish border.    The evacuation is a boost to a cease-fire that has been shaky since it began on the evening of 24 October.

A local official in Ras al-Ayn told the Associated Press that Kurdish fighters and civilians had begun leaving in convoys and it was unsure if it would be completed by 20 October.

The cease-fire deal only calls for fighters to leave the border area. But Kurdish civilians flee as well because without their protection they fear atrocities by the Turkish-backed Syrian forces. Those fighters, who are Arab and often Islamist extremists, have been accused of killings of Kurdish civilians and captured fighters during this campaign and in other Syrian territory seized in Turkish campaigns since 2017.

A senior official in the Kurdish-led Syrian Democratic Forces, Redur Khalil, said that after the Ras al-Ayn evacuation, the forces will withdraw from a zone about 120 kilometers (75 miles) wide and 30-kilometers (20 miles) deep between Ras al-Ayn and the town of Tel Abyad further west.

Under the accord, that pullback is supposed to be completed by the evening  of 22 October when the cease-fire — or pause in fighting, as Turkey calls it — runs out.

It was said that the Trump administration negotiated the accord after heavy criticism at home and abroad that it had opened the way for the Turkish invasion by abruptly removing its soldiers from northeast Syria . That move abandoned the Kurdish-led force, which had allied with the Americans to fight the bloody, years-long campaign that brought down the Islamic State group‘s rule over nearly a third of Syria.

Both sides accuse each other of repeatedly violating the three-day old cease-fire. Turkey’s Defense Ministry said one of his soldiers was killed Sunday in a Kurdish attack with anti-tank weapons and small arms fire near the border town of Tal Abyad.   That brought the Turkish military’s death toll to seven soldiers.    But what happen after this.

Question is – the same type of agreement must be for the Turkish people also, not only for the Kurdish/Syria.   Why don’t the Turkish not get away 440 kilometers from their border too?

It was stated on 20 October 2019 that Erdogan has said the Kurdish fighters must withdraw from a far larger length of the border — from the Euphrates River to the Iraqi border, more than 440 kilometers (260 miles) — or else the Turkish offensive will resume Tuesday.
U.S. officials say the agreement pertains to the 120-kilometer section. Erdogan’s spokesman, Kalin, confirmed that is the area affected by the pause in fighting, but said Turkey still wants the larger zone.

Reported on 25 October 2019 – there is ongoing fighting within the “safe zone” along the Turkish and Syrian border in an area that remains a stronghold of the Syrian Democratic Force. Former Special Presidential Envoy for the Global Coalition to defeat ISIS Brett McGurk joins Ali Velshi to discuss the developments of the ceasefire in Northern Syria and the Secretary of Defense’s warning about the Syria invasion.

The broader Kurdish pullback, if it is carried out, will grant Turkish forces control of the swathe of territory roughly in the middle of the Syrian-Turkish border. The area has been the main theater of fighting during the offensive, causing the flight of tens of thousands of civilians — Arab and Kurd — from the villages that dot the landscape. At least 160,000 civilians have been displaced by the Turkish assault.

A previous agreement between the U.S. and Turkey over a “safe zone” along the Syria-Turkish border foundered over the diverging definitions of the area.   Erdogan has said the Kurdish fighters must withdraw from a far larger length of the border — from the Euphrates River to the Iraqi border, more than 440 kilometers (260 miles) — or else the Turkish offensive will resume Tuesday.    U.S. officials say the agreement pertains to the 120-kilometer section. Erdogan’s spokesman, Kalin, confirmed that is the area affected by the pause in fighting, but said Turkey still wants the larger zone.

Turkey considers the Kurdish-led fighters as terrorists because of their links to a Kurdish insurgent group inside Turkey. It says any presence of the group along its borders is an existential threat. Turkey also wants to resettle some of the 3.6 million Syrian refugees on its soil in the border “safe zone.”

Another question is what the arrangement will be along the rest of the northeastern border, from the Euphrates River to the Iraqi border, most of which remains solely in the hands of Kurdish-led fighters.

When they were abandoned by U.S. troops, the Kurds turned to Russia and secured an agreement for Syrian government forces to deploy in the northeast last week.   So far, the Syrian forces have only moved into one location directly on the border, the town of Kobani, and a few positions further south.   Erdogan is to meet Russian President Vladimir Putin in the Russian town of Sochi on Tuesday. His spokesman Kalin said he will tell Putin that Ankara does not want either Syrian forces or Kurdish fighters along the border because refugees would not go back to areas under their control.

“We want to create conditions that will be suitable for them to return where they will feel safe.”

Who invaded who’s land here?  It is also illegal and violations of human rights to all those that are living there.

Without the support of the United States, the Kurds have turned to their old enemy, President Assad of Syria himself. His forces are now moving into towns and villages once held by the Kurds, setting up a potential flashpoint between the Syrians and the Turks, two large, well-equipped armies.

Is this only a one sided agreement – to get rid of the Kurdish people?

During discussions in Sochi, the Russian President Vladimir Putin and his Turkish counterpart Recep Tayyip Erdogan struck an agreement on the fate of northeast Syria on 17 October 2019 to create a new status quo in the region.

The Kurds are an ancient and noble people who are now the primary “boots on the ground” against ISIS in the Middle East. They are 35 million strong worldwide, the largest people group on earth without their own country.
Statelessness – Violation of Human Rights and international crimes