Somalia, the first time, released a report on its’ position about the issues of the wall-border that is currently being under construction by the Kenya government.   Kenyan government claims that the wall construction will help prevent terrorism operatives to sneak into the Kenyan side.

Wall is to secure safety

Kenya made the decision to build the wall dividing its Mandera border town and Somalia’s Beled Hawa border town in 2015 after multiple attacks by Al Shabaab on civilians and security officials.

So far, Kenya has built more than 4 km of the wall and the residents say Kenya is constructing the wall on their land. This is beside earlier protests against the idea of building the wall which the Somalis believe will restrict easy movement of students and traders into the neighbouring country.

Kenyan authorities are blaming external players with interests in oil, gas and fishing for the ongoing diplomatic spat with Somalia over the common border in the Indian Ocean.

The diplomatic flare-up is also being seen as arising from emerging regional security concerns and internal Somali politics as the country prepares for next year’s elections.

The presidential election planned for 2020 and regional elections, especially in Jubbaland, have generatedmuch heat in Somalia, where President Mohamed Abdullahi Mohamed Farmajo’s government is trying to entrench itself and increase its chances of winning the polls.

It is not lost on the Farmajo regime that Jubbaland leader, Sheikh Ahmed Madobe is allied to Kenya, a position Mogadishu is uncomfortable with and has been determined to change.

Kenya needs Madobe to ward off Al Shabaab, from whom the Kenya Defence Forces took Kismayu, the capital of Jubbaland, in 2012.

Jubbaland State stretches along the entire northeastern Kenyan border, effectively creating a buffer zone with the rest of Somalia. Madobe also needs Kenya because the majority of his Ogaden clan whose support he needs to stay in power, live in Kenya.

Somalia and Kenya remain culturally and economically joined at the hip and it was therefore a surprise when Nairobi sent back the Somalia ambassador on February 16 and recalled its own from Mogadishu over Somalia’s alleged auctioning of disputed offshore oil blocks that are the subject of a suit at the International Court of Justice in The Hague, Netherlands.

Kenya’s Foreign Affairs Cabinet Secretary Monica Juma on Thursday told journalists at a press conference in Nairobi that the Kenyan Cabinet had reiterated at a meeting chaired by President Uhuru Kenyatta that it would not cede any of its Indian Ocean resources, signalling that the standoff was far from over.

The government of Somalia and Spectrum Geo, the company that hosted the February 7 Somalia Oil Conference in London, and conducted a 2D offshore seismic survey, have dismissed Kenya’s claims that oil blocks were auctioned.

Spectrum insists that no seismic data was acquired in the area that is the subject of maritime delimitation case at the ICJ, and whose hearing could begin any time now.

Kenya however maintains that Somalia auctioned some of the offshore oil blocks within the disputed 100,000 square kilometres. Dr Juma cited blocks 230, 231, 232 and 233 as the oil blocks Somalia offered bidders at the London conference, insisting they belong to Kenya’s maritime zone.

Diplomacy analysts reckon that Somalia’s decision to exhibit seismic data of oil blocks to potential buyers in London on February 7 was sponsored by those who are keen to exploit the resources off the shores of Somalia.

British companies Soma Oil & Gas and Spectrum Geo are among firms that have conducted seismic surveys and mapped out Somalia’s promising oil reserves along the Indian Ocean coast between the cities of Garad and Kismayu, totalling 100 billion barrels.

The question however remains whether Mogadishu has the capacity to monitor exploration and production activities or even the legal grounding to enter into contracts of that nature.

Somalia has yet to enact the law governing oil and gas, and the proposed Somalia Petroleum Authority is yet to be constituted. More important is the fact that Somalia is currently governed by an interim Constitution. In the circumstances, many legal experts believe the legality of any deal signed could be challenged.

A source close to the Kenyan government told The EastAfrican that Somalia’s latest actions are being driven by commercial interests in the offshore resources.

Besides the British, other companies interested in the offshore resources, including fishing, are Dutch, French, Norwegian, Canadian, Chinese and Japanese.

The maritime border dispute has simmered over time, culminating in Somalia’s filing of a suit at the ICJ in 2014 accusing Kenya of encroaching on its 100,000-square-kilometre marine territory with potential oil and gas deposits in the Indian Ocean. Before then, bilateral negotiations had dragged on for six years without much success.

On its part, Somalia says the boundary extends to the southeast as an extension of the land border. This would take a large swathe of what Kenya considers its EEZ. 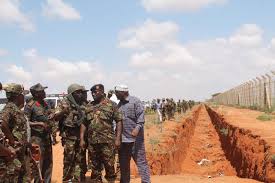 Workers unroll wire mesh along the area intended to be the Kenya-Somalia border wall.

The wall was to have a series of concrete barriers, fences, ditches and observation posts overlooked by CCTV stations.   It was also expected to stretch from the Indian Ocean to Mandera county where both countries converge with Ethiopia.   Construction had begun at Kiunga in Lamu county, where al Shabaab militants are believed to hide out along with smugglers in uninhabited islands off the Indian Ocean coast.   But the workers who were hired by the government downed their tools over unpaid salaries. The workers said they were promised Sh126,000 each when the project started in March.

Following many attacks from al Shabaab, the government resolved to build a 440-mile wall along Kenya’s border with Somalia.   The intention was to keep out rebels and boost security to curb the loss of lives witnesses from terror attacks.   The wall was expected to stretch from Border Point One in Mandera to Kiunga in Lamu county.   In March 2015, Somalia distanced itself from plans by Kenya to construct a barrier wall between the two countries said it was not consulted in the planned erection of the wall.   The government had not estimated the cost, but one unofficial estimate places the cost at Sh20 billion, another at Sh203 million a kilometre.

When Kenya dispatched some 2,000 troops across the border into Somalia on October 16, officials in Nairobi argued that they’d had little choice. After a series of cross-border raids by the Somalia-based Islamist militant group al Shabaab, Kenya’s internal security minister, George Saitoti, said, “Kenya has been and remains an island of peace, and we shall not allow criminals from Somalia, which has been fighting for over two decades, to destabilize our peace.” A recent spate of kidnappings of tourists and aid workers inside Kenya, Saitoti and others said, was the final straw. With its largely peaceful post-independence history, Kenya has built itself into a regional economic powerhouse, and a serious threat to that prosperity would have to be countered. Accordingly, Nairobi invaded its neighbor to secure its eastern border and to create a buffer zone inside Somalia.

But this case for war is less than convincing, as it is difficult to argue that the threat from al Shabaab is substantially worse than it has been in years past. Kenyan troops have armed, trained, and organized proxy forces to fight al Shabaab on the border since at least 2009, albeit to no great effect. For at least three years, al Shabaab has threatened armed attacks on Kenya; cross-border raids by al Shabaab fighters have been a fact of life in northeastern Kenya for some time. In fact, by some estimates, the overall threat from al Shabaab has declined in recent months: the UN’s envoy to Somalia said in August that Ugandan and Burundian peacekeepers had actually weakened the al Qaeda-affiliated militants.