Somalia gains independence from Britain on 7 January 1960.
Somaliland has its own green, white and red flag. Somalilanders take great pride in presenting giant versions of this flag to visiting diplomats who sometimes blush as it is unfurled in front of them because it puts them in a somewhat difficult position regarding the territory’s unrecognised status.
Situated in the horn of East Africa, early on Somalia’s economy was based upon the nomadic herding of animals. From the time of America’s Reconstruction (1870s) until World War II (1942), Britain gained control over the Italian portions of Somalia. In 1887, Britain became concerned with keeping the route to India open through the Suez Canal, which was opened in 1869, and as a result, Britain proclaimed Somalia as a British protectorate and named it British Somaliland.

On August 5th, the government of the “autonomous” region of Puntland within the Somali Federal Republic—a region which has been de facto independent in most respects since 1998—said it is now cutting off all relations with the internationally recognized but largely ineffective Somali Federal Government (S.F.G.) in Mogadishu.

Puntland sits at the very tip of the Horn of Africa.  To its west is the de facto independent Republic of Somaliland, which since 1991 has considered itself both de facto and de jureindependent of Somalia.  To Puntland’s south is the pirate-infested “autonomous” region of Galmudug, also nominally Somalian but de facto self-governing.  South of Galmudug is a vast patchwork of clan and militia territories which the rest of the world calls “Somalia” but of which only the capital, Mogadishu, and its environs are governed by the internationally recognized Somali government.

Somaliland is not doing too badly, actually.  Just this week, the governor of the Mogadishu government’s central bank, Abdisalan Omar Hadliye, had to reassure the public that his office had not, as had been reported, pressured the United Kingdom government to shut down the Somaliland central bank’s contract with a British firm to mint the Somaliland shillin(i.e., “shilling”), the national currency. Hadliye reiterated that Somaliland absolutely has the right to mint its own currency.  Mogadishu makes a lot of noise about not recognizing Somaliland, but it knows better than to interfere in any concrete way with the sovereignty of the resource-rich quasi-state.  Puntland may be beginning to see the advantages of that approach.

In the beginning of the 20th century, native uprisings challenged British control. In 1910, the British abandoned the interior of Somaliland and withdrew to the coastal regions. Italy seized the opportunity to extend its control inland and took over many of the regions that the British had abandoned. After WWII, Italy relinquished control and Somalia was given to the United Nations. For 10 years, it was a UN trust territory under Italian administration until 1960, when Somalia was granted independence, merged with the former British protectorate and the Somali Republic was formed.

Four years later, Somalia fought with Ethiopia over the Ogaden region. The country was run by a civilian government for the first few years, until the 1969 military coup of General Muhammed Siad Barre. Siad Barre held power for more than two decades. He attempted to regain the territories that the Somalis had lost over the years, which included portions of Djibouti, Ethiopia, and Kenya, invading the Ogaden region in 1977. Two years later, a new constitution was passed into law ensuring the rule of dictatorship with one political party.

While Siad Barre maintained his military dictatorship, foreign capital flowed into Somalia. The money came in the form of aid, from the International Monetary Fund (IMF) as well as individual countries as capital investment. The foreign aid often came in loans, which led to a massive foreign debt. Coupled with periods of severe drought, the debt soon made the economy unsustainable. The years of military dictatorship had disintegrated the social fabric of Somalia, and its people had no trust in the government.

During these years, the United States under Reagan and Bush, Sr., gave General Siad Barre more than U.S. $100 million per year. By the late 1980s, the economy of Somali was unsustainable, and foreign aid, including that from the International Monetary Fund, was withdrawn. With the collapse of the Somali economy, civil unrest directed against the oppressive Barre regime began in the North. The Somali National Movement (SNM) began activity and for the next three years, different anti-government factions fought Said Barre, until he fled the country in early 1991.

The collapse of the Siad Barre regime plunged Somalia into chaos, with many factions fighting to seize power. One of them, the United Somali Congress (USC), appointed a temporary president, which caused a civil war. Unarmed Jubba villagers starved, died, and fled by the hundreds of thousands and Somalia’s river valleys became war zones.

In 1992, The UN Security Council mounted “Operation Restore Hope,” led by the U.S. By September 1993, the American Congress was looking for a way to withdraw from Somalia without losing credibility. The military forces would not withdraw until March of 1995. During and after the civil war, many Somalis left the country. Refugee status was granted to many Somalis by the United States government. The largest Somali population in the United Sates is in Minnesota. 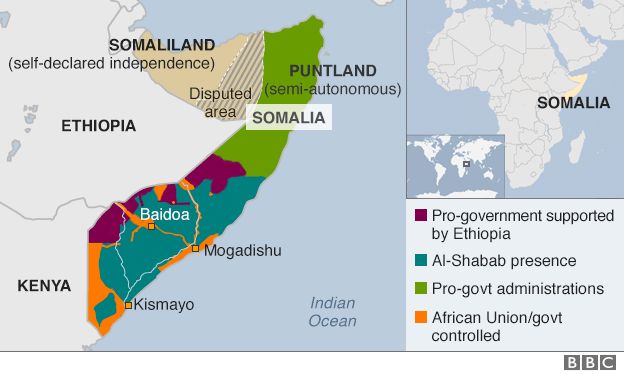 Exactly 25 years ago, after a ferocious civil war, north-west Somalia broke away from the rest of the country and declared itself independent.

A quarter of a century later, not a single country recognises Somaliland, but this territory of about 3.5 million people is arguably one of the more stable, democratic places in the Horn of Africa.

At the BBC, we don’t call Somaliland a country because officially it isn’t one. We call it a “self-declared republic”, inviting criticism from many Somalilanders.

But the territory has its own currency, passport, army and legal system. Its presidents come to power through fiercely-fought elections, sometimes won with the narrowest of margins. Unlike many other African countries, the results are respected, even when the opposition wins.

Somaliland is by no means perfect. Large parts of the east are disputed, sometimes violently, with other regions of Somalia. People in the west agitate for autonomy. There are reports of sleeper cells of the Islamist militia, al-Shabab.

Some migrants who die in the Mediterranean are from Somaliland, where youth unemployment is estimated at 75%.

On recent visits to the territory, I have seen lines of young men walking along the roadsides, carrying small bags. “They are on tahrib,” I am told – starting their long, uncertain journey to Europe or the Gulf.

The authorities are harsh towards the media, sometimes arresting journalists and shutting down newspapers. In January, six prisoners found guilty of murder were executed.

And such is the hostility towards Somalia proper that last year four members of the popular Horn Stars band were arrested on their return to Somaliland from Somalia. Their alleged crime was waving a blue Somalia flag at a concert in the Somali capital Mogadishu.