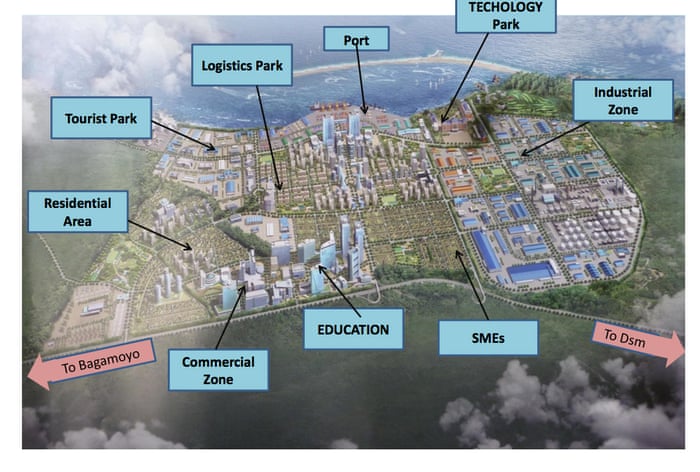 2019 – “In an effort to get the construction work started at this SEZ, I have since directed the MEC for Economic Development, Environment and Tourism to fast-track the finalization of the environmental impact assessment (IEA) and the adoption of the internal master plan by October of this year,” said Premier Stan Mathabatha.

The tiny fishing village of Bagamoyo is set to become Africa’s largest port in a $10bn Chinese development. Are locals right to be optimistic?  As their hand-built wooden  dhow approaches the shore, Ibrahim Chamume and his fellow fishermen take in the sail and prepare to sell their catch to the small huddle of villagers waiting on the white sand. He has been making a living like this on the Indian Ocean since he was 14. His father was a fisherman, too.
Now in his 30s, Ibrahim says earning enough from traditional fishing is tough, but has its compensations. There is the view across the tranquil lagoon to the mangrove swamps; the unspoiled beaches and bays; the lush vegetation and smallholdings growing maize, cassava, cashews and mango. Such scenes must have played out in the tiny Tanzanian village of Mlingotini for centuries.
In a decade, however, the mud-and-thatch homes of Mlingotini, and a further four villages along this coastline 30 miles north of Dar Es Salaam, will be gone – razed to make space for a $10bn Chinese-built mega-port and a special economic zone backed by an Omani sovereign wealth fund.   The area south of Bagamoyo – once notorious as a key staging point in the slave trade and unsuccessfully proposed 12 years ago as a world heritage site– is seen by China as a new Shenzhen. Before Deng Xiaoping designated Shenzhen as China’s first special economic zone in 1979, it, too, was just a small fishing town. Now it is a hi-tech hub and one of the world’s biggest cities.
Meanwhile, landlocked Ethiopia got a 470-mile electric railway from its capital, Addis Ababa, to the port in the neighbouring dictatorship of Djibouti. The £2.5bn project – financed by a Chinese bank and built by Chinese companies – opened in January. Addis’s new light rail system, too, was funded and built by China, and operated by Shenzhen Metro Group. And Djibouti, in exchange for major investments, preferential loans, a pipeline and two airports, got China’s first overseas military base.
While east Africa has been the main focus of Belt and Road on the continent, Chinese infrastructure projects stretch all the way to Angola and Nigeria, with ports planned along the coast from Dakar to Libreville and Lagos. Beijing has also signalled its support for the African Union’s proposal of a pan-African high-speed rail network.
The key difference is that Tazara was mostly paid for by Chinese aid money – a significant investment given how impoverished China was at the time. Whether branded Belt and Road or not, virtually every new project is now funded by Chinese commercial loans.
Though China loaned a whopping $95.5bn on the continent between 2000 and 2015, researchers at the China Africa Research Initiative found most of this was spent addressing Africa’s infrastructure gap. Some 40% of the Chinese loans paid for power projects, and another 30% went on modernising transport infrastructure. The loans were at comparatively low interest rates and with long repayment periods. 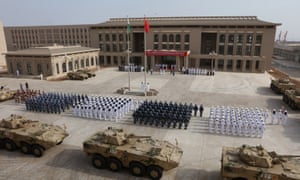 The  railway station in the city of Adama in central Ethiopia 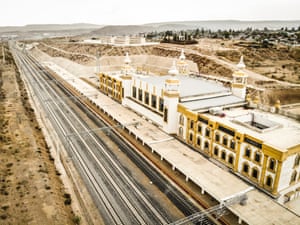 They promised us we would get jobs there,” says Tadele, nodding at the grand, almost baroque edifice at the bottom of the hill. Adama’s new railway station, yellow bricks golden in the afternoon sun, is still a symbol of hope for the 43-year-old who lives in a village overlooking it. But its promise is dimmer than it was.

A stint on the payroll of the Chinese firm that built Ethiopia’s new railway ended sourly. After six months he was fired, for reasons he disputes. Now, like many in his village and in small towns all along the railway from the Ethiopian capital, Addis Ababa, to Djibouti, the tiny nation and synonymous Red Sea port that borders Ethiopia, he is frustrated, impatient – and unemployed.

Ethiopia’s new £2.5bn, 750km (466-mile) line began commercial operations at the start of the year, making it Africa’s first fully electrified cross-border railway. Built and financed by Chinese investors and contractors, and shadowing the route of an earlier French-built track, the Addis Ababa-Djibouti railway lies at the heart of Ethiopia’s development aspirations. By linking the landlocked country to the sea and lowering transport costs for imports and exports, the government hopes to kickstart industrialisation and transform a poor, agricultural nation of nearly 100 million people into a middle-income one by as early as 2025.

This put the ERC and its Chinese contractors on a collision course with farmers when construction started back in 2011. In the Oromo district of Mieso, an arid dust bowl 150km west of the major city of Dire Dawa, Yusuf Mohammed seethes as he hammers away at a small construction site. “People are really angry about the new railway. More than 300 people here lost their land, including my relatives, but they are not seeing benefits,” he says.

He blames corrupt officials for unfair compensation. “People were intimidated, they were forced to give up their land almost for free.”

A local official supports his allegation. “There were committees who estimated the value of the land for the farmers, and presented the price to the railway managers. I believe there was embezzlement by those committees and the managers,” he told the Observer under condition of anonymity. “One farmer’s land was estimated to be worth 250,000 Birs (£6,700) but in the end only 100,000 Birs was deposited in his bank account.”

In March a parliamentary committee strongly criticised the ERC for compensation payments, with MPs reporting that thousands of “tearful” farmers had complained that they had not been treated fairly. The ERC responded that valuations were carried out by local administrations, not the corporation.

Ibrahim, a 17-year-old who lives in Awash National Park, where a second railway line is currently being built by a Turkish firm, is more sanguine. “The railway benefited the people – even those who lost their land got compensation,” he says. But he adds that when construction began in early 2015 a band of furious locals tried to prevent it. “People were very angry,” he recalls. “They said: ‘Don’t do this; don’t do it on our land.’ There was a confrontation one night between the people and the contractors. People resisted, and 10 people died.”

The Chinese Railway Construction Corporation (CRCC) said it hired more than 20,000 local workers in Ethiopia and 5,000 in Djibouti. But former employees complain of low wages and, like Tadele in Adama, of poor treatment by their Chinese managers. Since construction ended there have been few new jobs, in part because the rail services will be staffed by Chinese controllers, technicians and station masters for the next five years.

Parties involved in the Bagamoyo mega project are working to complete a master plan and design for the Special Economic Zone area.

The Chinese Ambassador to Tanzania, Dr Lu Youqing, said the Project will turn Bagamoyo into Shenzhen, a city in China which was transformed into a Special Economic Zone area.

Dr Youqing noted that the Merchants Holdings International Company Limited (MHICL), which is implementing the Bagamoyo project, developed Shenzhen. He further said that Tanzania had attached great importance to the Bagamoyo project which is a joint project of Tanzania, China and Oman.

“The government of Tanzania has attached great importance to the Bagamoyo Port and adjacent Industrial Park and it has listed it in the second five-year national development plan. “This is a mega project, it is a huge work to turn Bagamoyo into Shenzhen of Tanzania,” he explained noting that the Chinese developer wanted to implement the project in phases. “With regard to the Port, the three parties have reached a general consensus on construction and operation of the Port.

The Port consists of eight kilometres Port Zone and a logistics centre… there will be dredging water channels to the Port,” he explained.

The Ambassador said that the Chinese investor wanted the SEZ part of the project to be split into phases and the first phase to be developed will be 17 square km, but Tanzania wants to see the project developed as whole. “So, they are still discussing and I think finally, maybe they will first finish the master plan of the project,” he stated.

Dr Youqing said in Shenzhen City, MHICL did the job in phases with the first phase covering 11 square km. “But I told the China Merchant colleague that Tanzania wishes you to develop Bagamoyo SEZ as a whole, this shows that they trust you, you need to cherish this opportunity,” he explained .

The Ambassador said MHICL is a reputable company revered all over the world for the good work they do, with more than 20 countries seeking their service mainly in implementation of port and industrial park projects. Speaking on investments, Dr Youqing explained that the friendship that exists between Tanzania and China has seen increased investment and trade.

Citing the Tanzania Investment Centre (TIC) statistics, Dr Youqing said by end of June 2016, Chinese investment in Tanzania had reached 6.62 billion US dollars with about 600 Chinese companies operating in Tanzania.

The Chinese investments, he explained, are in the areas of agriculture, tourism and Information, Communication and Technology (ICT), creating about 150,000 direct employment and 350,000 people engaged in trade between the two countries, citing a South Africa-based research institute Imara statistics of 2014.

“Initially, many people were opposed to the gas pipeline but today everyone is praising it. We have provided loans for this project and upon completion of the pipeline, people along the line and those in Dar es Salaam are benefiting,” he explained.

China in Africa and South Africa