Earthlife Africa Johannesburg, along with a number of community and other partners submitted their concerns on 17 March 2021 to the Department of Trade, Industry and Competition, and the Department of Environment, Forestry and Fishing – regarding the proposed Musina-Makhado Special Economic Zone (MMSEZ) in Limpopo Province.

Part of the planned EMSEZ will be built on the ancestral land of the Mulambwane people, where graves and mopane trees are found, said activist Ramuhala.   AND Water is still the biggest problem.

The project is expected to generate about 1 billion tonnes of carbon dioxide over its lifetime – equal to a little more than double South Africa’s current annual emissions.   The planned EMSEZ would comprise a northern site for logistics and a southern site for the energy and metallurgical cluster – where more than 100,000 indigenous and protected tree species are found, according to the EIA.

“We are worried that if the project goes ahead, we will be wearing masks for years to come, not because of coronavirus but because of pollution,” said environmental activist Innocent Ramuhala from Mudimeli village, close to the proposed site.   The planned Musina-Makhado Energy-Metallurgical Special Economic Zone (EMSEZ) would cover 8,000 hectares (19,768 acres) with industrial facilities including a coal washery and plants for coking coal, ferromanganese, steel and cement.   “We have strong objections to the project – which entails the development of massive, unnecessary and expensive polluting infrastructure,” said Michelle Koyama, an attorney with the CER.

WHO ARE THE RACISTS HERE?   why only chinese?

The $14.7 billion (R193 billion) in Chinese investments – which include loans to Transnet and Eskom – announced during Chinese President Xi Jinping’s state visit to South Africa this week, are dwarfed by South Africa’s investment in that country, which stood at just over $80 billion in 2016, according to a recent report compiled by Deloitte for the Department of Trade and Industry.

Was this type of zones created for people like China and “elite investors” ?

Where is all the corruption money today, because nobody is in jail so far and no money is back?

What is a Special Economic Zone (SEZ) anyway? Here is a short, informative video by African Centre for Citizenship and Democracy (ACCEDE) to explain what an SEZ is and why you need to know about it especially in the context of South Africa and the MMSEZ (Musina Makhado SEZ).

Who is winning at the end – not the people and community, but the huge amounts of money for certain companies.

We write as organisations and individuals (listed below) concerned about the proposed Musina-Makhado Special Economic Zone (MMSEZ) being promoted by the Limpopo Provincial Premier and government. This is an urgent supplement to our engagement with available public processes, in particular the Environmental Impact Assessment (EIA) being undertaken for the Musina-Makhado SEZ (SOC) Ltd, conducted under the authority of: Limpopo Economic Development, Environment and Tourism (LEDET).

We have questions on several issues which fall outside the scope of any available engagement process (that we are aware of), but are of vital interest to potentially affected parties and urgent relevance to other development plans and on-going policy elaboration, inter alia enhancing South Africa’s Nationally Determined Contribution under the Paris Agreement, and the sustainable development prospects for competitive participation in international supply chains for the minerals required for a zero-carbon global economy.

We choose to address both Ministers as it is not clear how big-picture issues are to be addressed or the extent to which SEZ legislation may be supportive of an integrated assessment of the over-all value proposition, which is essential and not addressed under the incremental approach being taken to environmental impact assessment. We are also concerned about potential conflicts of interest for Provincial authorities, with LEDET being responsible for an objective assessment of the proposition’s socio-economic merits (under the EIA), while the Limpopo Economic Development Agency (LEDA) is championing the MMSEZ.

With regard to understanding the potential national value of this mega-project, we request access to documentation addressing the roles and responsibilities of the various parties, including the Memorandum of Understanding between national and provincial government – particularly any provisions for assessment of projected job creation and net socio-economic benefit – and an overview of any public engagement processes pertaining to the MMSEZ that are or will be overseen by national government, i.e. DEFF or DTIC.

We further request access to or details of the currently applicable Operator’s Permit, such as was signed by Rob Davies as DTI Minister in 2017, and the terms of appointment of the operator.

From information available to date, it is clear that prospective water supply options “being considered” by Limpopo Province have not been meaningfully assessed and remain highly speculative. In this regard we’d welcome any information on any engagement or communication by national government with the regional body having oversight of the whole Limpopo River catchment area – the Limpopo Basin Commission (LIMCOM) – and/or with the Limpopo North Catchment Management Agency.

As in many African nations, the construction of new SEZs in South Africa in recent years has been intricately linked with China. In 2014, Jacob Zuma, then South Africa’s president, visited China, and SEZs were identified as a key area for cooperation. The same year saw South Africa pass a new law on them. Eleven have so far been set up, with another five planned.

Operating in an SEZ means big tax advantages for corporations, with corporate income tax slashed from 28% to 15%. Investors also benefit from preferential and one-stop service policies on infrastructure and employment.

This will be South Africa’s first foreign-operated SEZ, a degree of overseas control never before seen.

The South African government formally approved the SEZ in 2016. In 2017, the then Department of Trade and Industry issued an operating licence to the South African Energy and Metallurgical Zone Co, a subsidiary of Chinese firm Shenzhen Hoi Mor.

In 2016, Hoi Mor committed US$3.8 billion to the project. According to the project’s website, between May and July of 2018, the local government, Hoi Mor’s local subsidiary and at least nine major Chinese firms, including the Power Construction Corporation of China and the Taiyuan Iron and Steel Group, signed three-party memoranda of understanding, bringing the total investment to US$10 billion.

Water was one major issue raised in the open letter, and the South African media has been watching this closely due to concerns over people’s health, livelihoods and the environment.

According to Munnik’s report (Witwatersrand), the zone lies in the arid and low-precipitation Sand River catchment. In this populous area the main source of water, groundwater, has already been overexploited. Urban areas already rely on water transfer from other catchments.

But a climate impact assessment carried out as part of the EIA process showed that in its lifetime carbon emissions from the MMSEZ would account for between 10% and 14% of South Africa’s entire carbon budget if it is to keep within the 2C warming threshold set out in the Paris Agreement. Unless carbon capture and storage (CCS) is used to sequester all the plant’s emissions, it will “severely reduce South Africa’s ability to achieve its NDC [nationally determined contribution to meeting the Paris goals]”. The report points out that as CCS is not yet technically or economically feasible, approval for the plant should not be granted.

In September 2017, a few days before Hoi Mor obtained its operating licence, Zimbabwe and Interpol issued arrest warrants for Yat Hoi Ning, then chairman of the company, in connection with a fraud case dating back to April of that year.

There are cleaner alternatives. Richard Worthington of the Friedrich Ebert Foundation told China Dialogue: “We could be producing hydrogen from wind on the Soutpansberg mountains,” referring to a mountain range stretching over 100 kilometres close to the SEZ, “and hydrogen in [the] metallurgical process is one of the things we need to get to carbon neutral”.

Do maintenance on all equipment, water and electricity, power stations.

Start at all the municipalities today, because they are not doing a good job with all the pollution in the water.   Mining is also a problem that use drinking water for their own purposes and pockets. 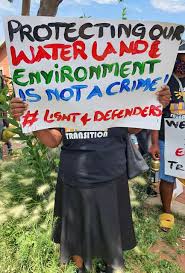