During the 15th century miners in Germany found a brown-red ore which they believed to contain copper.  They called it Kupfernickel or Devils’ Copper because they couldn’t recover copper from it.   Coins in the USA first used nickel alloyed with copper in 1857. The “nickel” was not made from pure nickel but in 1881, pure nickel was used for coins in Switzerland. 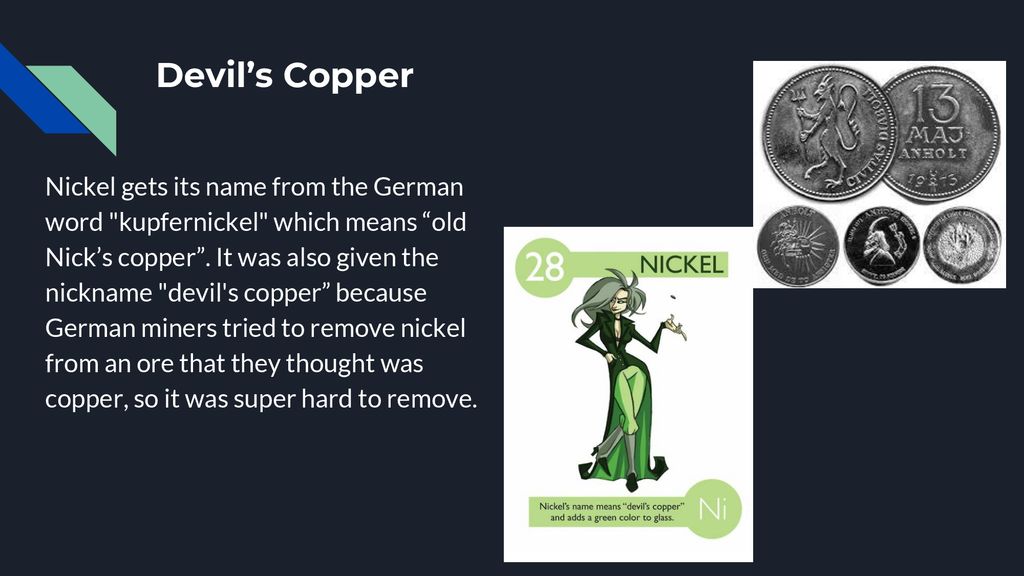 Stainless steels were discovered early in the 20th century and nickel was found to have a very beneficial role in many of the common grades, which continues to this day. Alloys based on nickel were found to have excellent corrosion resistance and could withstand high temperatures, which made them suitable for chemical plants and also allowed the practical realisation of the jet engine. As a result of these developments, nickel has enjoyed a very strong growth of demand over the past century. This continues today because of the essential role nickel plays in many technologies.

It was first identified and isolated as an element by the Swedish chemist, Axel Cronstedt, in 1751. In the 19th century, it came to prominence in plating and in alloys such as “nickel silver” (German silver) in which it is alloyed with copper and zinc. This alloy was named for its colour and does not contain any silver!

Nickel is a naturally-occurring metallic element with a silvery-white, shiny appearance. It is the fifth-most common element on earth and occurs extensively in the earth’s crust and core. Nickel, along with iron, is also a common element in meteorites and can even be found in small quantities in plants, animals and seawater.

The world’s nickel resources are currently estimated at almost 300 million tons. Australia, Indonesia, South Africa, Russia and Canada account for more than 50% of the global nickel resources. Economic concentrations of nickel occur in sulphide and in laterite-type ore deposits.

Nickel resists corrosion and is used to plate other metals to protect them. It is, however, mainly used in making alloys such as stainless steel. Nichrome is an alloy of nickel and chromium with small amounts of silicon, manganese and iron. It resists corrosion, even when red hot, so is used in toasters and electric ovens. A copper-nickel alloy is commonly used in desalination plants, which convert seawater into fresh water. Nickel steel is used for armour plating. Other alloys of nickel are used in boat propeller shafts and turbine blades.

Nickel has a long history of being used in coins. The US five-cent piece (known as a ‘nickel’) is 25% nickel and 75% copper.

Finely divided nickel is used as a catalyst for hydrogenating vegetable oils. Adding nickel to glass gives it a green colour.

In tropical to subtropical areas (e.g. New Caledonia, Brazil, Philippines), prolonged and pervasive weathering of ultramafic rocks produces Ni laterite ores which are further enriched in Cr. While elevated levels of Cr have been identified in Ni laterites, Cr availability and export from these deposits and its contribution to natural waters remain poorly understood.