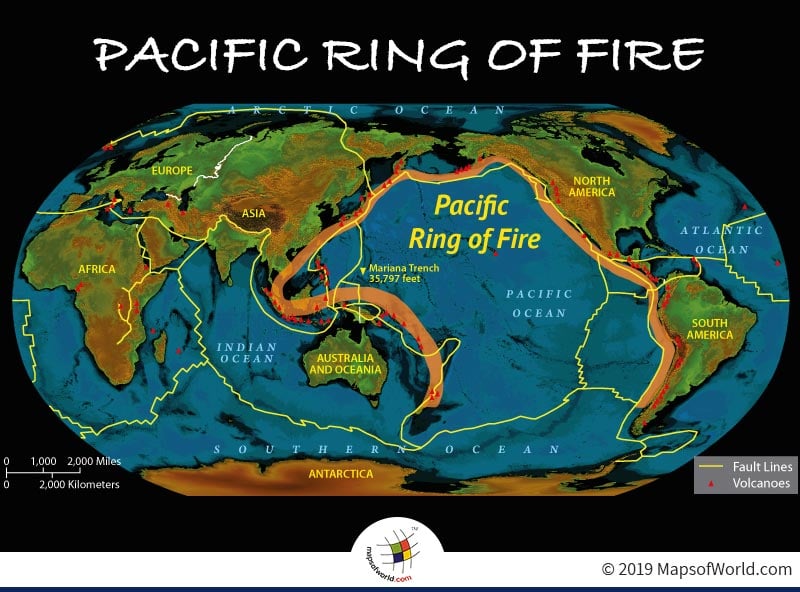 It is not only in the Ring of Fire, but also in Africa – AFAR is still there, for years.

Nyiragongo volcano that looms a few miles from the major eastern Democratic Republic of Congo (DRC) town of Goma erupted at approximately 09:30 local time on 17 January, 2002. … The Nyiragongo volcano, situated near the border with Rwanda, is known as one of Africa’s most active volcanoes.

Rising magma and empty coffers, following an allegation of embezzlement, has left volcano watchers in Eastern Democratic Republic of Congo worried that they will not be able to provide an early warning if a volcano towering over the city of Goma erupts.

A volcanic hot-spot is an area in the mantle from which heat rises in the form of a thermal plume from deep within the Earth.  Higher heat and lower pressure at the base of the lithosphere melts rock and forms magma.  The magma rises through the cracks in the lithosphere and erupts to form volcanoes.

Videos and other information
https://clarkscience8.weebly.com/hot-spots.html

Several countries in Africa are affected. 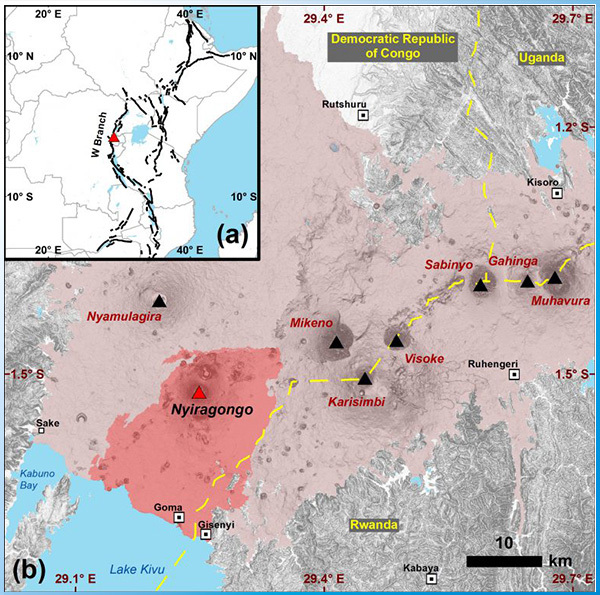 Volcanism at Nyiragongo is caused by the rifting of the Earth’s crust where two parts of the African Plate are breaking apart. A hot spot is probably also partly responsible for the great activity at Nyiragongo and Nyamuragira.

Between 1894 and 1977 the crater contained an active Lava Lake. On 10 January 1977, the crater walls fractured, and the Lava Lake drained in less than an hour. The Lava flowed down the flanks of the volcano at speeds of up to 60 miles per hour on the upper slopes, overwhelming villages and killing at least 70 people.

The hazards posed by eruptions like this are unique to Nyiragongo. Nowhere else in the world does such a steep-sided strato volcano contain a Lake of such fluid Lava.

Nyiragongo’s proximity to heavily populated areas increases its potential for causing a natural disaster.    The 1977 eruption raised awareness of the unique dangers posed by Nyiragongo, and because of this it was designated a Decade Volcano, worthy of particular study, in 1991.

The 1977 eruption was preceded by the creation of a new small volcano, Murara, a short distance away on the slopes of Nyamuragira.   Lava Lakes reformed in the crater in eruptions in 1982–1983 and 1994.

Another major eruption of the volcano began on January 17, 2002, after several months of increased seismic and fumarolic activity.A 13 km fissure opened in the south flank of the volcano, spreading in a few hours from 2800 m to 1550 m elevation and reaching the outskirts of the city of Goma, the provincial capital on the northern shore of Lake Kivu. Lava streamed from three spatter cones at the end of the fissure and flowed in a stream 200 to 1000 m wide and up to 2 m deep through Goma.

This raised fears that the Lava might cause gas-saturated waters deep in the Lake to suddenly rise to the surface, releasing lethally large amounts of carbon dioxide and methane – similar to the disaster at Lake Nyos in Cameroon in 1986. This did not happen, but volcanologists continue to monitor the area closely.

The Ring of Fire refers to a geographical area of high volcanic and seismic activity around the edges of the Pacific Ocean. It may be a famous song by country legend Johnny Cash, but to geologists, volcanologists, and seismologists, the Ring of Fire is a vast geographic area rich in tectonic activity.

The Ring of Fire has produced the world’s most destructive and active volcanoes, not to mention most of the world’s earthquakes.  If we trace a line around the Pacific Ocean on a map or globe, it would roughly make a ring, or circular, shape. Now, imagine that ring on fire. That term is descriptive rather than literal. All along this ring, earthquakes and volcanic eruptions are common because of tectonic plate boundaries and movements.

The Ring of Fire is a 25,000-mile-long zone located along the boundary of the Pacific Plate. This zone traces along the meeting points of many tectonic plates, which is why so much seismic activity occurs there.   The Ring of Fire got its name because roughly 90% of all earthquakes and 75% of all active volcanoes occur along its path. It is the most volcanically and tectonically active area in the world.

24 March 2021 – A drone captured stunning close-up shots of lava bubbling in the crater of a volcano on Tuesday that began erupting near Iceland’s capital Reykjavik .

0:15​ The drone operator braved the snow and biked seven kilometres to the volcano which is not accessible by road, and captured lava pouring from the crater, down the side of the volcano, and into a lava field. The eruption, which occurred near Fagradalsfjall, a mountain on the Reykjanes Peninsula in southwest Iceland, followed thousands of small earthquakes in recent weeks and was the first on the peninsula since the 12th century. Drone operator credit: THE EMPIRE PRODUCTIONS/ICEBIKE ADVENTURES

The top 15 countries in The Pacific Ring of Fire include:

The resulting sea wave washed whole villages on nearby Java and Sumatra away. A cloud of super-heated rock particles and poisonous gases known as a pyroclastic eruption rushed down the volcano’s slope destroying the town of Saint-Pierre on Martinique. Unlike lava, it travels so fast that it cannot be outrun.

Like Grimsvatn, Nevada del Ruiz in the Andes Mountains is also covered by a glacier. A small eruption melted part of this ice, and the melt water produced a mud flow that inundated the town of Armero, located in a valley below the volcano. Interestingly, none of these three volcanoes had been active in the century prior to their eruption, although all had some historic activity.

The eruptions of Ruiz and Pelee were moderate-to-large in size, not gigantic. Their effects were confined to a ten-to-twenty kilometer radius around the volcano. The large death toll was the result of a moderate hazard combined with a moderately sized town.

Indonesia, an archipelago of 270 million people, sits along the Pacific “Ring of Fire,” a horseshoe-shaped series of seismic fault lines around the ocean. That location leaves the country prone to earthquakes, volcanic activity and tsunamis.

2 gedagtes oor “Fire in earth in Africa too”