Quotes from articles by Ashten Sawitsky.    The African-Somali euler rotation poles has been estimated in various different locations near the Antarctic region. The first two positions of the euler rotation axis did not incorporate microplates and therefore were inaccurately placed father south (Emerick and Duncan, 1982) (Jesten et al., 1994). The most recent euler pole of rotation has been changed to incorporate a microplate known as Lwandle which is situated between the Nubian and Somalian Plates at the south-western Indian Ridge (Horner-Johnson et al., 2007).

Microplates within and touching the Somali plate (Stamps et al. 2008). 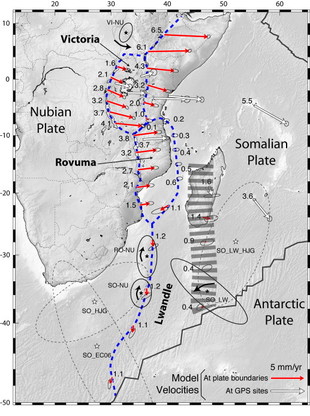 The final euler pole rotation suggests that the Somali plate is being separated from Africa faster in the Northern area near the Afar triple junction and decreasing to minimal separation near the Southern boundary at the Antarctic triple junction (refer to slide show below).    The Somali plate was presumably created during the suturing of East and West  Gondwana  , during which the Mozambique belt was formed consisting of medium to high grade gneiss and voluminous igneous layers  (Kroner and Stern, 2005).

The continental foundation of the Somali plate is primarily metasediments and igneous intrusives of Late Precambrian. Later followed by an episode of Paleozoic continental sedimentation through to the Mesozoic where marine sedimentation is present along the eastern edge of Somali. To the north, sediment deformation is seen paralleling the onset of the Afar triple junction, Red Sea, and Gulf of Aden depressions during the early Paleogene  (Baker et al., 1972).

Gondwana and apparent cratons sutured together with continental belts (Korner and Stern, 2005). Note that Somali is predominately made up of the Mozambique Belt. 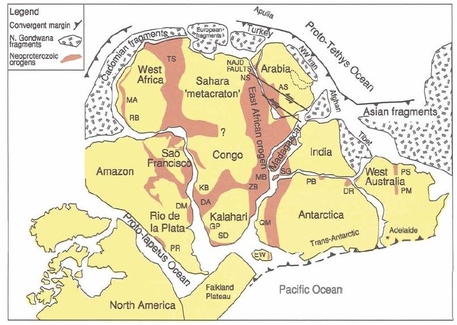 There have been three consecutive magmatism uplifts in the Ethiopian and Kenya regions relating to Eocene, mid-Miocene and Plio-Pleistocene periods. These igneous systems were predominately alkaline volcanic (silicic and intermediate composition). Thus, the western flank of the Somali plate is a build-up of igneous rocks and consists of flood basalts, flood phonolites, trachytes, rhyolites and ignimbrites (figure 7) (Emerick and Duncan, 1982), (Ray et al., 2009) (Mege and Purcell, 2010) (Baker et al., 1972).

The Dabbahu volcano erupted in 2005 causing one of the largest surface fractures recorded in human history. Within days of eruption, the surface crack reached 500 meters long resulting from a 60 km long uplifted magma dike. It is estimated that the crack will reach the Red sea in 4 million years, which is further evidence for a developing sea. This phenomenon also caused over 160 earthquakes to swarm the area (Campbell, 2009).

The East African Rift is a southern rifting arm off the Afar Triple Junction and transects through African countries such as Kenya, Uganda, Rwanda, Zambia, Malawi and subsiding in the Lesotho-Natal, a seismically active area. The African rift is divided into two arms at the Afar Triple junction in Djibouti. Heading northwest, the rift follows the Red Sea Rift until it meets the Dead Sea Transform fault up to Sinai, Egypt. From there, its trajectory becomes the Hula valley separating the Golan Heights and Galilee Mountains. This valley turns into the Beqaa Valley at which point terminates this rifting arm. Towards the northeast, the rift goes through the Aden Ridge in the Gulf of Aden. It then meets the Indian Ridge offshore in the Arabian Sea.

The East African Rift started separating African into two continents around 23 million years ago and has undergone five different chronological rifting stages consisting of many volcanic events. The basement of the rift is layered with dormant and active volcanoes such as Fantelle, Longonot and Moroto (Briggs and Blatt, 2009).

An Article 2011 of Eastern Africa was explained a few things and overlooked in terms of its hydrocarbon potential for many years, is increasingly viewed as an exploration hot spot, with recent discoveries in the Albertine Rift and offshore Tanzania leading to resurgence in interest. Dominated by the East Africa Rift System (EARS), the region has a complex geological history and provides the potential to bring together modern techniques to aid geological understanding and to help efficiently target hydrocarbon exploration.