With no end in sight, the fighting that started in October 2017 has continued to increase in intensity. It has forced almost a fifth of the province’s people to leave their homes and reduced access to care and other services in the area to almost nothing.     Nearly 670,000 people have been forced from their homes since conflict broke out in northeastern Mozambique’s Cabo Delgado province in 2017, between non-state armed groups and the army. MSF medical coordinator Patricia Postigo describes the situation in and around the city of Montepuez, where some 50,000 people have sought refuge from the violence. 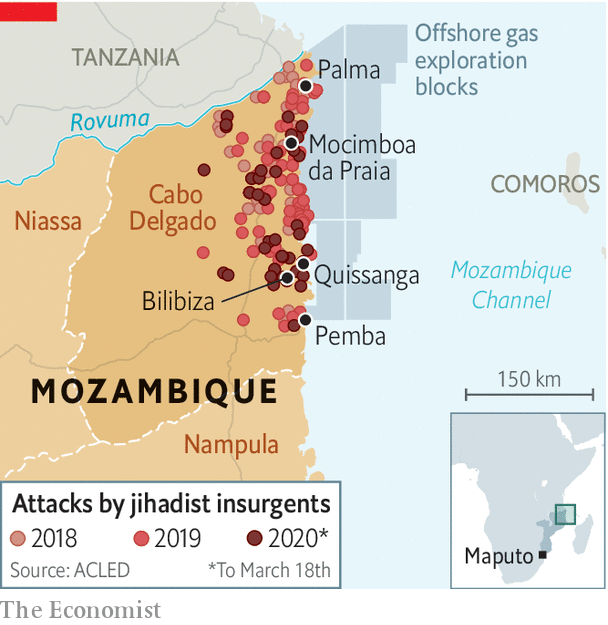 During 2020 there were various attacks and shootings.  An MSF staff member describes the horror of being caught in the crossfire on 28 May.    “The only way to escape was through the bushes at the back of the hospital. I ran from the area when I heard shooting around Macomia. The entire town was running towards the bush.   “We were at least a thousand people – men, women, the elderly, children, the sick and their caregivers – all running away from the sounds of shooting. It was like the end of the world.

Following the attack on 28 May 2020, no official report provided the number of civilian casualties and wounded. MSF has received unverified reports of at least 15 dead, including multiple children, some due to starvation as they hid in the bush for days to escape the fighting.    We did not have access to the area immediately after the attack. Some of our staff were allowed back to survey the damage and begin reducing our presence, following the decision to suspend operations in Macomia due to the heightened security risks.

Food security: Escalating violence and displacement have worsened the food security situation in affected areas. As at December 2020, it was estimated that over 900,000 people in Cabo Delgado, Niassa, and Nampula provinces were facing Crisis (IPC Phase 3) or Emergency (IPC Phase 4) levels of food insecurity. With limited supplies reaching markets and being sold, the cost of food and household items has increased rapidly.

In the jungle they come across dead people – relatives or neighbours from their villages who have been murdered, their bodies dismembered, and their heads cut off. They also see people who have died of hunger or thirst. They tell you that they can’t get these images out of their heads.

For many people, it is not the first time they have had to move. Since the conflict began, some people have already been displaced two or three times within their district after their villages were attacked.

Michael smelled trouble before he saw it. In January 2020 the 28-year-old from Bilibiza, in the northern Mozambican province of Cabo Delgado, caught a whiff of smoke. A village had been torched nearby. Within hours houses and schools in Bilibiza were burning as 10,000 residents fled.   It was the second time in two years that Michael (not his real name) had run for his life. In 2018 his village was attacked. At least five people were killed. A friend was decapitated. Today Michael, his wife and three young children live in Pemba, the provincial capital.

A simmering Islamist rebellion in a remote corner of Mozambique has erupted into open warfare in recent weeks, with reports of massacres, beheadings and the brief seizure of two towns in the northern province of Cabo Delgado, writes BBC Africa correspondent Andrew Harding.

The armed men walked calmly through the long grass, skirting past a large white building, seemingly untroubled by the sound of gunfire.   Most carried automatic rifles and wore variations of what appeared to be Mozambican army uniforms. A few more shots rang out in the distance and someone shouted “Allahu Akbar” – God is the greatest – as if in reply.

Those two large-scale, sophisticated military assaults are proof of a radical change in strategy for the group known locally as al-Shabab, although it has no known links to the Somali jihadi group of the same name, which is affiliated to al-Qaeda.

It has spent the past two years operating in the shadows, attacking remote villages across the province, ambushing army patrols on isolated roads, instilling terror in many rural communities, forcing perhaps 200,000 people to flee from their homes, but rarely giving any indication about its motives, its leadership, or its demands.

IS has claimed responsibility for a string of recent attacks in Mozambique, which has a Muslim population of about 18%, and appears to be promoting its involvement there as part of a “franchise” operation that has seen it expanding its footprint in several parts of Africa.

The idea that the rebellion in Cabo Delgado is, at its core, part of a global jihadist movement, has been given credibility by the militants themselves, who publicly swore allegiance to IS the previous year.

“We occupy [the towns] to show that the government of the day is unfair. It humiliates the poor and gives the profit to the bosses,” said the tall, unmasked man, in khaki uniform, surrounded by other fighters.

The man spoke frequently about Islam, and his desire for an “Islamic government, not a government of unbelievers”, but he also cited alleged abuses by Mozambique’s military, and repeatedly complained that the government was “unfair”.

Observers say the evolution of the insurgency in Mozambique is remarkably similar to Boko Haram’s emergence in northern Nigeria, with a marginalised group exploiting local grievances, terrorising many communities, but also offering an alternative path for unemployed youths frustrated by a corrupt, neglectful and heavy-handed state.

Mozambique’s government initially sought to downplay the rebellion, dismissing the militants as criminals, and blocking journalists from accessing the region. But that is changing.

“We’ve seen a shift from the politics of denial. Most of society and politicians now accept we have an Islamist insurgency,” said Mr Morier-Genoud.

Later, the government began to hire foreign security contractors – allegedly from Russia, the US and South Africa – to help the army crush the rebellion, but without any significant success.

There are concerns that the conflict, if mishandled, could spread into neighbouring Tanzania, and perhaps even to South Africa.

International gas companies – poised to invest billions in the off-shore gas fields discovered along the coast of Cabo Delgado – are now getting cold feet, partly because of the rising insecurity, but also because of falling gas prices.

Many observers and analysts believe that, fundamentally, the solution to the conflict lies in good governance, and a transparent attempt to address deep-seated economic and social grievances, including fair access to land, jobs, and a share of any future gas revenues.

“Multi-nationals want to know they can take their share, but they have to consider local people,” said the Bishop of Pemba.

“And the government has to know that it is very necessary that Mozambique’s natural resources must be used for the betterment of its people, not to cause corruption,” he added.

The number of displaced people is growing in Cabo Delgado, northern  Mozambique. In February, at least 200,000 people were displaced due to conflict that is growing in the area. Since then, numerous attacks on villages across the region have uprooted thousands more from their homes.

Armed groups are waging attacks in this complex, resource-rich region. Today, the north of Mozambique is the epicentre of social and economic tensions in the country, resulting in devastating consequences on the area’s people.

During an attack by insurgents on 28 May 2020, four MSF staff members were working at the health centre in Macomia just before it was ransacked and burned. That day, 27 MSF staff living in Macomia fled with the local people, dodging stray bullets as the combat intensified around them. No MSF staff members were killed during this incident, however the trauma they lived through remains very real.

All roads were blocked in and out of Macomia as insurgents entered the village. The only way to escape the erupting violence was to flee into the bush.