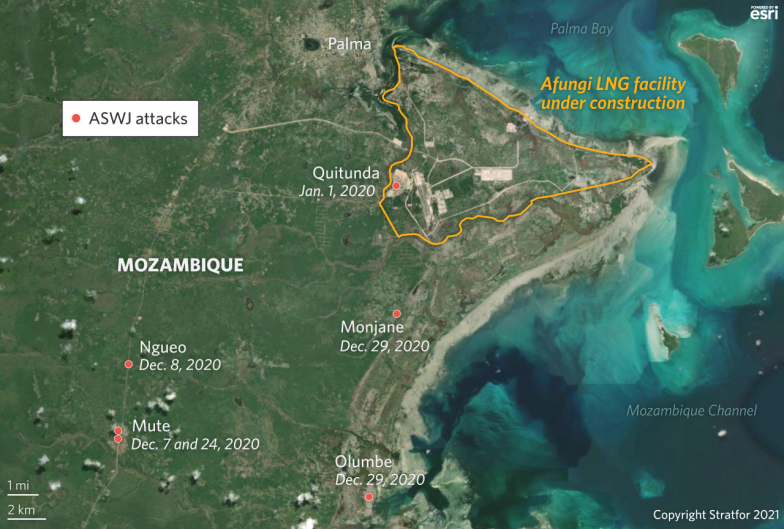 March 2021 – The Islamic State group claims responsibility for seizing the northern town of Palma in Mozambique. It’s the latest attack in an escalating Islamist insurgency sweeping the region. Also, tensions erupt between students and the government in South Africa over free higher education. Our correspondents went to find out whether cancelling student debt is a viable option.
video
https://www.france24.com/en/tv-shows/eye-on-africa/20210329-mozambique-islamic-state-group-claims-control-of-besieged-palma-town

The now famous Rovuma basin gas resource will likely be exported to world markets through a liquified natural gas (LNG) facility based on the Southern coastline of the Palma bay. The FEED contracts have been awarded, and a final investment decision is expected by Anadarko and ENI in 2017. The current projections for the project see first-gas production in 2020/21.

The two train, 20 mmtpa, LNG plant has been projected for a maximum of 10 train (50 mmtpa), which would make it the biggest LNG producing facility in the world.

Palma town, with less than 20,000 inhabitants will see an significant increase. Some estimates are that there will be 10,000 people employed directly for the LNG project’s onshore and offshore components at the peak of development.

7.000 hectares (yellow border) have been allocated to the onshore liquefied natural gas (LNG) park on the Afungi peninsula, that will be developed by specialised contractors.

The Government has also allocated an area of 18.000 hectares (red border) for the development of the main industrial and logistics facilities required to support the Afungi LNG park. In 2014, a general masterplan of urbanisation of this area was elaborated by the architectural firm Trassus (LINK AL DOCUMENTO?). This will be the strategic guideline for the development of this area.