Vandalism and theft across Gauteng schools have cost the provincial Education Department over R120 million since the start of the year 2019 (does not included previous years).   The staggering figure was released by MEC Panyanza Lesufi’s office during August 2019 which said 262 criminal cases were registered since January.  The Gauteng Education Department has been trying to introduce state of the art facilities and learning material to schools across the province.    Most of the losses were incurred on the East Rand where thieves targeted more than 50 schools. 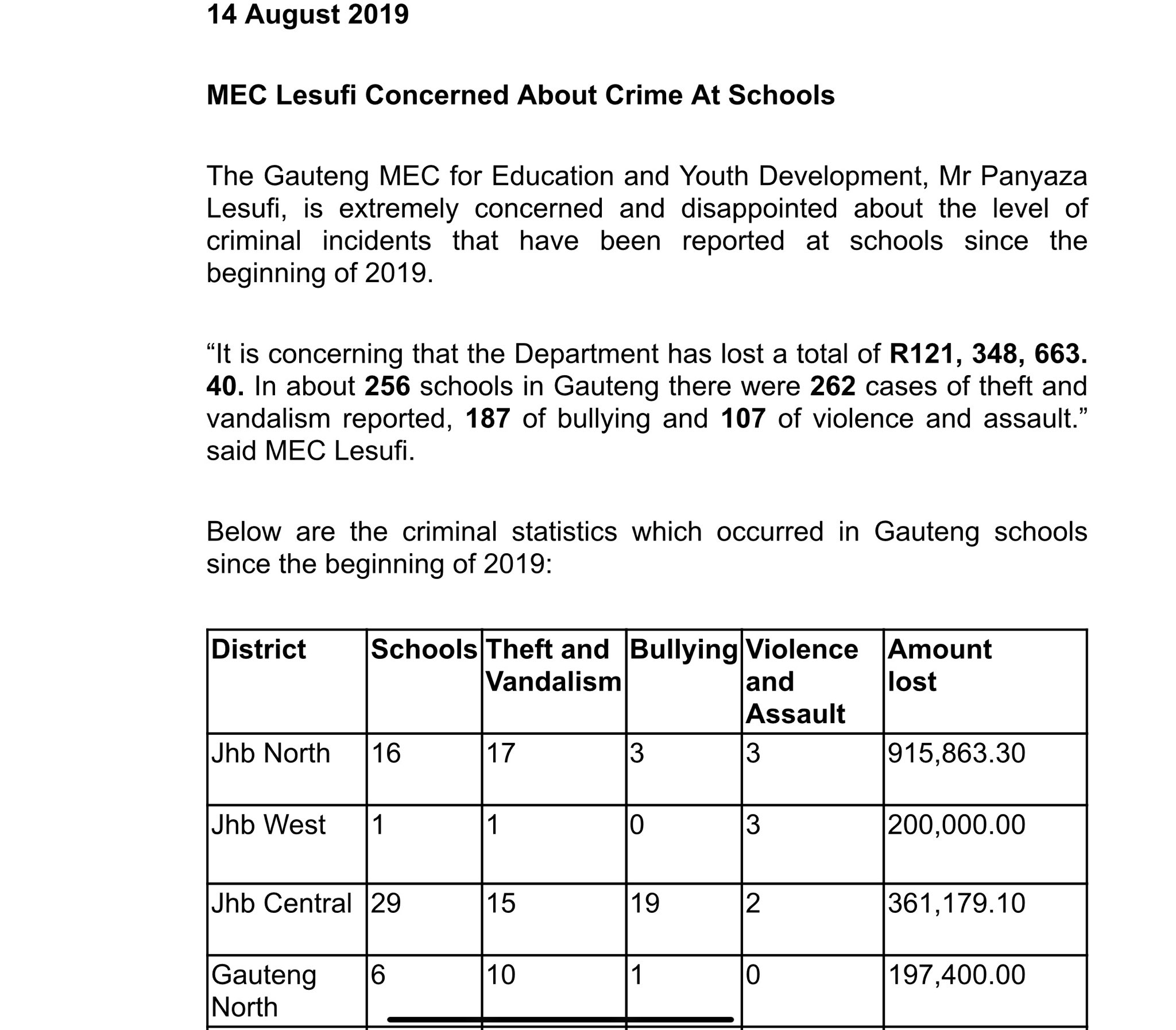 Killing of a school girl, stabbed, raped and burnt to death.

You and the ANC have created the violent and failed state we now have – YOU are guilty of that poor girls murder and rape, so stop pretending to care hypocrite.

*
What is the citizen’s human rights – criminals do have more rights than those in the country.    Who in government protect the criminals?

According to the South African Constitution, if it was according to me I would make those Soviet gulags look like a child's play compared to South African prisons, but then again human rights 🙄

Drugs are part of this protest actions – Druglords do not want interference.

@Lesufi @Steve_Mabona Unfortunately for us citizens, Drug lords have made our schools their marketplace and law abi… twitter.com/i/web/status/1…—
ThaboR (@RammoleT) January 27, 2020

STOP BRINGING THEM FROM OUTSIDE – BORDERS MUST BE CLOSED DOWN, BUILD A WALL AND ILLEGALS MUST BE OUT

IN TERMS OF THE CONSTITUTION, THE JUDGES ARE APPOINTED BY THE ANC PRESIDENT

Burning down of Trains and busses – they all wanted a services, but instead burn it to ashes.

This criminal behaviour is affecting millions of lives. Specialist criminal investigators needs to be appointed to tackle this urgently and stop it for good. Who ever is found guilty should be thrown in prison for 15 – 25 years! Secondly service improvements should follow.

A moment of horror for students today after rioters tried breaking open a classroom to disrupt the learners at the President High School.

THE Gauteng Department of Education visited President High School on January 25 to establish facts regarding the disturbing viral video depicting learners in a violent confrontation.   On the video, one learner is seen beating the other until he falls, hitting his head on the ground.  Gauteng Education MEC Panyaza Lesufi met with the principal, André Ferreira, who indicated it was an isolated incident following an altercation between the learners.

The preliminary report indicates the altercation started when the perpetrator threw a ball towards a Grade Eight learner, which was seen by the victim, who then confronted the perpetrator regarding the incident.

Lesufi cautioned against jumping to conclusions prior to the disciplinary hearing, as it would provide more details about what transpired. He also expressed concern about learners fighting, surrounded by a crowd and no one trying to intervene to stop the incident, as this sends out a very bad message.

The learners caught fighting on video have been suspended and will appear before a disciplinary process on January 31.

The disciplinary process will provide more details regarding what transpired, as the learners will have an opportunity to express their side of the story.

Lesufi welcomed the decision of the school to deploy additional educators for monitoring during break time.

“This is one of our top performing schools, with 98 per cent matric pass rate. Hence we were concerned when news of such an incident surfaced. We welcome the decision of the school to increase the number of educators who will monitor the learners during break time, from four educators to 10.

“The department will not tolerate any form of racism or bullying in our schools. We have a reponsibility to protect every learner,” said Lesufi.

Parents gathered in the school hall where Dennis Makwakwa, District Chairman, addressed them.    The parents, who are unhappy because their children have not yet been placed in schools, also protested at the school and disrupted classes.

#Chaos_SouthAfrica: 27Jan2020: The black indigenous community in #Dennilton built a wall across its access road to keep out black foreigners: https://t.co/QJrRF6lzvdhttps://t.co/lu2coPtAkW – pic.twitter.com/xU7jasrwiY

Video: #SouthAfrica 's resources are overwhelmed by untold many millions of illegal foreigners streaming across its #OpenBorders from the rest of Africa: but authorities "Are not allowed to arrest them." Black communities erect barriers to stop them .pic.twitter.com/y0mmRagjf4 https://t.co/QJrRF6lzvd

Most people living in Diepsloot are immigrants

24/01/2020#Diepsloot protesters say if they don’t get what they want they will shut down Diepsloot forever. Demanding the removal of Illegal immigrants.@PresidencyZA pic.twitter.com/caxU7ixmUd pic.twitter.com/j58UL6H3x0

Four classrooms, learning material and stock worth an estimated R4m were reduced to ashes in the blaze at Tokelo High School. Initial investigations pointed to the cause being arson.