The Trump administration has released the much-anticipated transcript summary of President Trump’s phone call with Ukraine President Volodymyr Zelensky, after Mr. Trump authorized publishing the transcript. A memo summarizing the call shows that the president urged Zelensky to probe Joe Biden and his son, Hunter Biden, who sat on the board of a Ukrainian natural gas company. 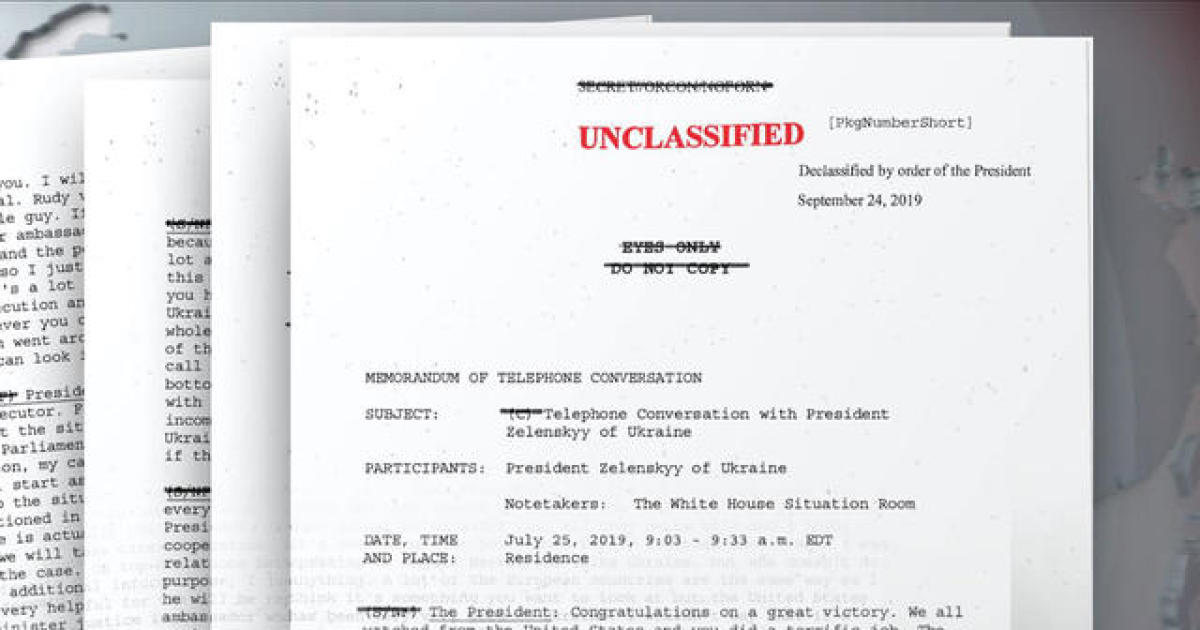 The memorandum released by the Justice Department is not, according to the administration, a verbatim transcript. The text, according to a footnote, is the record of the notes and recollections of the officers and National Security Council policy staff “assigned to listen and memorialize the conversation in written form.”

According to the call summary, Mr. Trump told Zelensky, “There’s a lot of talk about Biden’s son, that Biden stopped the prosecution and a lot of people want to find out about that. So whatever you can do with the Attorney General would be great. Biden went around bragging that he stopped the prosecution so if you can look into it…It sounds horrible to me.”

The president and his personal attorney Rudy Giuliani have accused Biden of acting inappropriately in March 2016, when during a visit to Kiev, he threatened to withhold U.S. funding unless Ukraine ousted then-prosecutor general Viktor Shokin, whom Western leaders and the U.S. had denounced as corrupt. The Ukrainian parliament voted overwhelmingly to remove Shokin in 2016. While he had opened an investigation into the Ukrainian natural gas company whose board members included Hunter Biden, it was dormant by the time he was ousted.

During the call, Mr. Trump referred to Shokin in positive terms. “I heard you had a prosecutor who was very good and he was shut down and that’s really unfair,” he said. “A lot of people are talking about that, the way they shut your very good prosecutor down and you had some very bad people involved.”

The president’s call with Zelensky took place a day after Robert Mueller testified before Congress about the Russia investigation and about whether Mr. Trump had obstructed justice, and the topic of the Russia probe also came up during the call. After Zelensky expressed his gratitude to Mr. Trump for the aid Ukraine received from the U.S., he said Ukraine was “ready to continue to cooperate for the next steps” in enforcing sanctions against Russia. “Specifically,” Zelensky said, “we are almost ready to buy more Javelins (missiles) from the United States.”

Mr. Trump responds, “I would like you to do us a favor though because our country has been through a lot and Ukraine knows a lot about it. I would like you to find out what happened with this whole situation with Ukraine, they say Crowdstrike … I guess you have one of your wealthy people… The server, they say Ukraine has it.”

CrowdStrike is a cyber security firm that in 2016 was called by the Democratic National Committee when it noticed unusual activity. It helped investigate Russian interference in the 2016 election and discovered two separate hacking groups connected to the Russian government had breached the DNC’s network.

Mr. Trump told Zelensky his personal lawyer, Rudy Giuliani and Attorney General William Barr would be calling Zelensky to “get to the bottom of it.” Mr. Trump be traveling to Ukraine. Zelensky said he would meet with Giuliani when he visited.

Zelensky also pledged that his new prosecutor would look into the case, and he asked for additional information.

At the United Nations, Wednesday, Mr. Trump remarked, “I will say that we do a lot for Ukraine. We spend a lot of effort and a lot of time.” Until earlier this month, Mr. Trump had temporarily frozen $391 million in aid to Ukraine. Ultimately, the White House released the funds to Ukraine in September, after withholding the aid for about two months.

*
*
*
It was reported that the impeachment inquiry into President Trump turned its spotlight on 4 November 2019 on four top White House officials, asking them to testify behind closed doors as Democrats probe whether Trump held up military aid as leverage to get Ukraine to investigate his political rivals.

“I would like you to find out what happened with this whole situation in Ukraine … There’s a lot of talk about Biden’s son, that Biden stopped the prosecution and a lot of people want to find out about that. So whatever you can do with the attorney general would be great. Biden went around bragging that he stopped the prosecution so if you can look into it … it sounds horrible to me.”…..

Democrats aren’t committing to a firm timeline for the investigation of President Donald Trump.   Speaker Nancy Pelosi on Sunday left open the possibility that Democrats’ impeachment inquiry will continue into next year, saying she had “no idea” if it would be finished by the end of December, the strongest indication yet that their probe into President Donald Trump could interfere with the 2020 presidential race.

Glenn Beck – There’s a big difference between conspiracy THEORY and conspiracy FACT. A conspiracy THEORY is an attempt to explain or connect the dots on something, but without any hard evidence.   Everything in this is backed up with hard evidence. Is it a conspiracy? Absolutely it is, but it’s a conspiracy FACT.    A very informative piece on what is really going on with the ‘progressive’ takeover of the U.S. government. A must watch to understand. Glenn Beck, although controversial, did a good Job with this video; ignore the hype, and just learn.

Ukraine Scandal: Trump, the ‘Deep State,’ and how the Democrats STOLE our government