Democrats aren’t committing to a firm timeline for the investigation of President Donald Trump.   Speaker Nancy Pelosi on Sunday left open the possibility that Democrats’ impeachment inquiry will continue into next year, saying she had “no idea” if it would be finished by the end of December, the strongest indication yet that their probe into President Donald Trump could interfere with the 2020 presidential race. 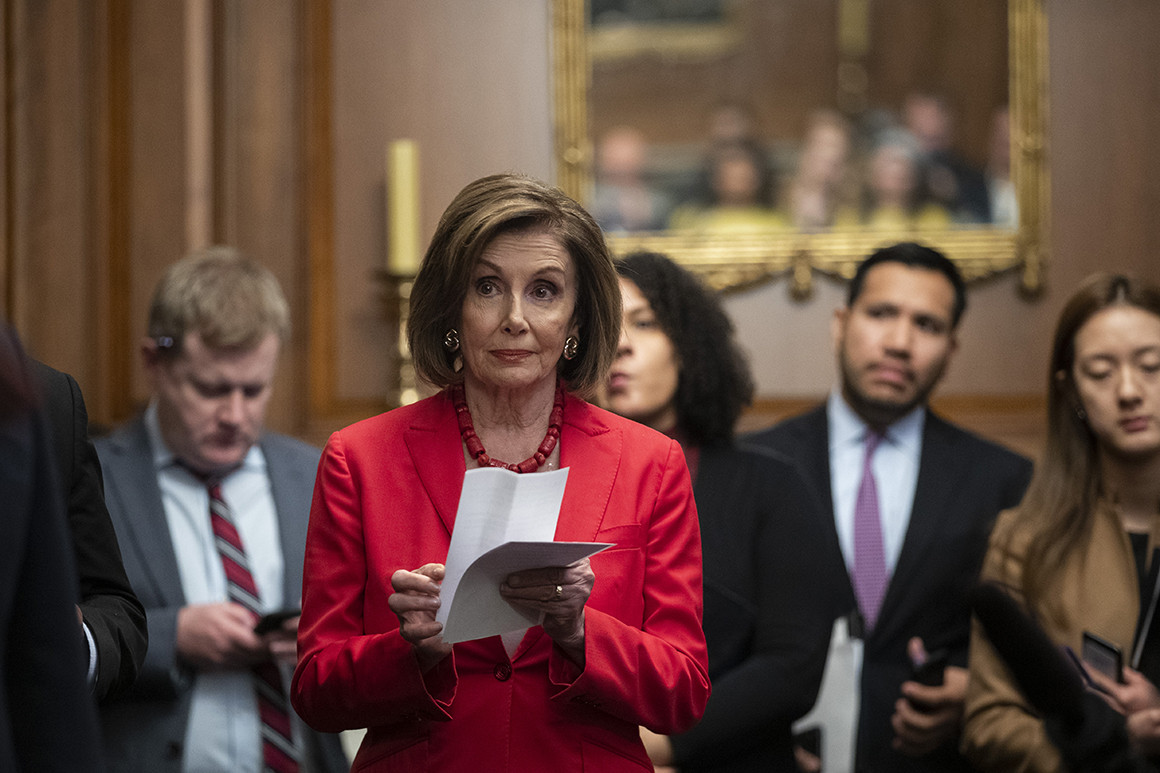 Pelosi also refused to elaborate on what — if any — charges House Democrats would bring against Trump, notably declining to say if the president’s Twitter attack on former U.S. Ambassador Marie Yovanovitch during her testimony Friday amounted to witness intimidation.   “I haven’t had a lot of time to pay attention to the president’s tweets and the legal implications of them. I just think that was totally wrong and inappropriate and typical of the president,” Pelosi said on CBS’ “Face the Nation“ in an interview that aired Sunday.

Pelosi and other senior Democrats have long declined to publicly commit to an end date to their impeachment investigation into whether Trump violated his oath of office by pressuring Ukraine to investigate former Vice President Joe Biden, a top political rival.

Democrats have said privately they hoped to finish the inquiry by the end of the year, allowing enough time for a possible Senate trial before the official start of the presidential nominating contest, beginning with the Iowa caucuses on Feb. 3.   But with House investigators still conducting closed-door depositions, a slate of public hearings set for next week and no indication yet of when the process will move to the House Judiciary Committee, Democrats have started privately worrying that the inquiry won’t be finished before Congress leaves for Christmas next month.   “I have no idea,” Pelosi told “Face the Nation“ host Margaret Brennan when asked if the investigation would be wrapped up by the end of this year.    “It is self-evident that we have open hearings for the next week. I don’t know if there are any beyond that,” she added, noting the possibility that depositions could continue into Thanksgiving week. “And then when we come back [from Thanksgiving], maybe a decision or maybe they have more hearings.”

Republicans, meanwhile, continued to downplay the president’s pressure campaign on Ukraine while largely leaving the facts of what unfolded throughout the summer undisputed.   House Minority Whip Steve Scalise (R-La.) on “Fox News Sunday“ repeatedly reiterated that Ukraine eventually received the $391 million in military aid that is at the center of the Democrats’ impeachment investigation.

“The real bottom line is he got the money — Ukraine got the money,” Scalise told host Chris Wallace, noting that senior Ukrainian officials have publicly said they didn’t feel pressured by Trump to investigate Biden in return.

“There was never an investigation undertaken,” added Rep. Jim Jordan (R-Ohio), one of the lead Republicans on the House Intelligence Committee, on “Face the Nation.“ “It didn’t happen.”   And Sen. Ron Johnson (R-Wis.), who pressed Trump about the aid holdup in August, said the president seemed to indicate he was preparing to release the military funding.

“He was already leaning toward providing that funding on Aug. 31,” Johnson said on NBC’s “Meet the Press.“ “My guess is that if this never would’ve been exposed, the funding would’ve been restored and our relationship with Ukraine would be far better off than it is today.”   But Democrats note the aid wasn’t released until Sept. 11, two days after House Intelligence Committee Chairman Adam Schiff (D-Calif.) announced a “wide-ranging investigation” into Trump’s efforts to pressure Ukraine after Schiff first learned of the whistleblower complaint.

“The president of the United States was using the massive powers entrusted to him, to try to use tax payer dollars as leverage to get a foreign country to interfere in an election,” Sen. Chris Murphy (D-Conn.) told Chuck Todd on “Meet the Press.”   “If you don’t use impeachment for this type of offense, then I am not sure what you use it for.”

Murphy’s remarks follow a week in which House investigators — and millions of Americans tuning in — heard detailed accounts about the pervasiveness of the campaign to pressure Ukraine into helping the president damage a top political rival, the smearing of reputations along the way, and Trump’s direct involvement in the effort.

Trump attacked Yovanovitch on Twitter in the middle of the hearing, prompting Schiff and other Democrats to accuse Trump of real-time witness intimidation, potentially bolstering an obstruction of justice charge against the president.

Lawmakers also heard testimony — first from William Taylor, the top American diplomat in Ukraine and later from the staffer himself — about a phone conversation a U.S. official overheard in Kyiv during which Trump asked if Ukraine had agreed to investigate Biden.

David Holmes, the State Department official, corroborated Taylor’s account during a closed-door deposition with House investigators Friday afternoon. Holmes said he overheard Gordon Sondland, the U.S. ambassador to the European Union, telling Trump that Ukrainian President Volodymyr Zelensky would do “anything you ask him to.”

Sondland, who did not mention the July 26 call with Trump in either his closed-door deposition or later addendum to his testimony, will appear before the House Intelligence Committee on Wednesday.

Sondland is one of eight witnesses scheduled to testify publicly over three days as Democrats try to wrap up public hearings soon. Democrats are still trying to finish their full probe — including possibly voting to impeach Trump — by the end of the year.

The slate of hearings this week will kick off Tuesday morning with testimony from Jennifer Williams, a top aide to Vice President Mike Pence, and Lt. Col. Alexander Vindman, a senior official on the National Security Council.

Both Vindman and Williams were on the July 25 call between Trump and Zelensky and later expressed alarm about the president asking for “a favor” that included investigating an energy company associated with Biden’s son.

In a transcript of Williams’ closed-door deposition, released Saturday afternoon, the Pence aide said Trump’s demands were “unusual and inappropriate.”

Still, Pelosi on Sunday wouldn’t elaborate on what, if any, articles of impeachment Democrats will bring against Trump or whether that would include bribery, which she accused the president of earlier in the week.

Bribery is one of the specific crimes listed in the Constitution as impeachable. Over the last week, House Democrats have been making a concerted effort to publicly claim Trump committed bribery when he tried to use millions of dollars in military aid to Ukraine as leverage to force the country to investigate Biden.

“There’s not even a decision made to impeach the president,” Pelosi said on “Face the Nation,“ while adding that Trump has yet to produce evidence that “demonstrates his innocence.”

“This is a finding of fact, unfolding of the truth. And then a decision will be made and that is a decision that goes beyond me,” Pelosi added.

Glenn Beck – There’s a big difference between conspiracy THEORY and conspiracy FACT. A conspiracy THEORY is an attempt to explain or connect the dots on something, but without any hard evidence. Everything in this is backed up with hard evidence. Is it a conspiracy? Absolutely it is, but it’s a conspiracy FACT. A very informative piece on what is really going on with the ‘progressive’ takeover of the U.S. government. A must watch to understand. Glenn Beck, although controversial, did a good Job with this video; ignore the hype, and just learn.
Ukraine Scandal: Trump, the ‘Deep State,’ and how the Democrats STOLE our government