Around 130,000 to 100,000 years ago the Sahara desert was not the sea of sands it is today. Instead, three large rivers created green corridors that linked sub-Saharan Africa to the Mediterranean and could have provided a safe means of passage for migrating ancient humans, according to a new study 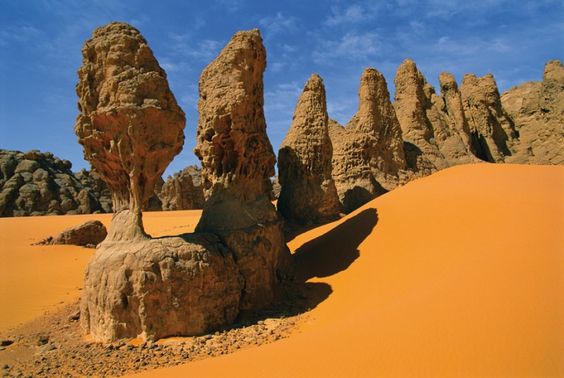 Authors of a new PLoS One study simulated ancient rainfall and water patterns using a state-of-the-art computer climate model. This allowed them to peer into the palaeohydrology of around 12 million square kilometers of desert. The models revealed three ancient rivers that today are largely buried beneath the dunes. io9 describes the ancient landscape:

Much like the Nile, these rivers would have created narrow stretches of nutrient-rich soil, producing “green corridors” that would have allowed animals and plants to prosper in the otherwise inhospitable desert. What’s more, the simulations suggest the likely presence of “massive lagoons and wetlands” in what is now northeastern Libya, covering an estimated 27,000 square miles.

The study authors suspect these watery highways played a significant role in human migration. They write:

Whilst we cannot state for certain that humans migrated alongside these rivers, the shape of the drainage systems indicate that anyone moving from south to north from a 2000 km wide region in the mountains would be funnelled into three clear routes.

One river system, called the Irharhar, appears to have been a particularly popular travel route. Middle Stone Age artifacts have already turned up along that extinct waterway, and more likely await discovery. “It is likely that further surveys in this area will provide substantial evidence of Middle Stone Age activity, especially in the areas of buried palaeochannels,” the authors say.

The world’s largest non-polar desert, is actually the widespread burial grounds of countless, mysteriously unknown, ancient ruins & civilizations, that have long since been forgotten, having been consumed and hidden by the sands of time, thousands of years ago. And here’s the thing…when I say “thousands of years ago”…that’s the part where things start to get really strange…

The Eye of Africa is not just the most likely location of Atlantis, but the connection of this new evidence I’m about share makes this case so compelling that it’s practically definitive. In my first two videos on the topic of The Lost City of Atlantis, I connected the dots on more than a dozen similarities between Plato’s description of Atlantis, to that of the Richat Structure, which is commonly referred to as the Eye of the Sahara and is located in a remote region of North West Africa, in the country of Mauritania. Atlantis has been hidden in plain sight for thousands of years.