More than one face  emerge from the landscape when seen from the air.   Located in southeastern Alberta, Canada, near Medicine Hat, this great geological wonder can only be seen from high above the ground.   Nevertheless, its humanoid details are stunning when one considers that human hands took no part in shaping this large mass of rock. The profile was formed by the erosion of rainwater on layers of clay-rich soil.   Do they speak.
Soms praat rotse en berge met ons en gaan terug duisende jare terug toe daar nog reuse geleef het…

*
More than one face 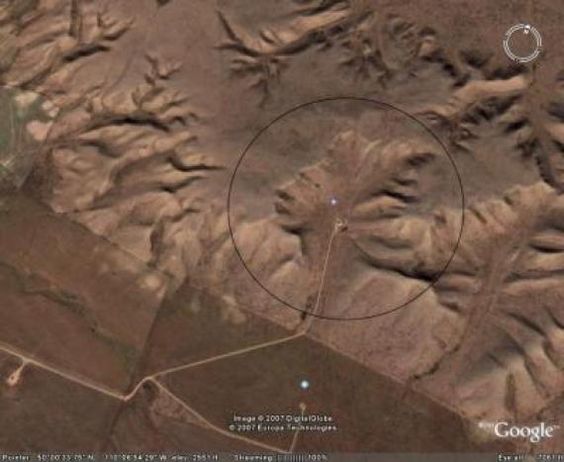 Coordinates: 50° 0’36.30?N, 110° 6’46.82?W. The Badlands Guardian is in the area of southwest Alberta, Canada. The area is a completely natural formation. The landscape look like a human head wearing his full native American headdress. There is no explanation how come the formation resemble the well detailed figure of the very same indigenous population of these lands.

MORE ABOUT THE NAZCA LINES IN PERU
The Nazca lines were discovered in the Peruvian desert in 1939, 200 miles south of Lima. They were created between 200BC and 600AD by the Nazca Indians – or maybe aliens??? There are over 800 straight lines, 300 geometric figures and 70 animal and plant designs, best viewed from the air. Shapes include a monkey, dog, birds, a human and a spider, said to be a diagram of the constellation Orion.

The desert has a reddish surface with lighter-colored subsoil and no wind, rain, snow, erosion or vegetation, the lines have remained etched in the earth. Some lines are 30 miles long, and shapes are as big as the Empire State Building! The geometry, astronomy and artistry of these geoglyphs is astounding. How were they created so precisely? Who created them, and why? What’s with the electomagnitism over the lines? Various theories suggest they were created for irrigation ditches, ancient calendars, ceremonial rituals, an homage to the gods … or, perhaps, alien runways??? It’s an enigma worth exploring if you visit Peru!

The Richat structure is near to Ouadane, west-central Mauritania. The formation stretches across a 40 kilometer-wide region of the desert in the nation of Mauritania. The Eye resembles a blue bullseye and is located in the Western Sahara.

Interessant  die “oog” bo in Afrika.
The eye from Africa in the desert 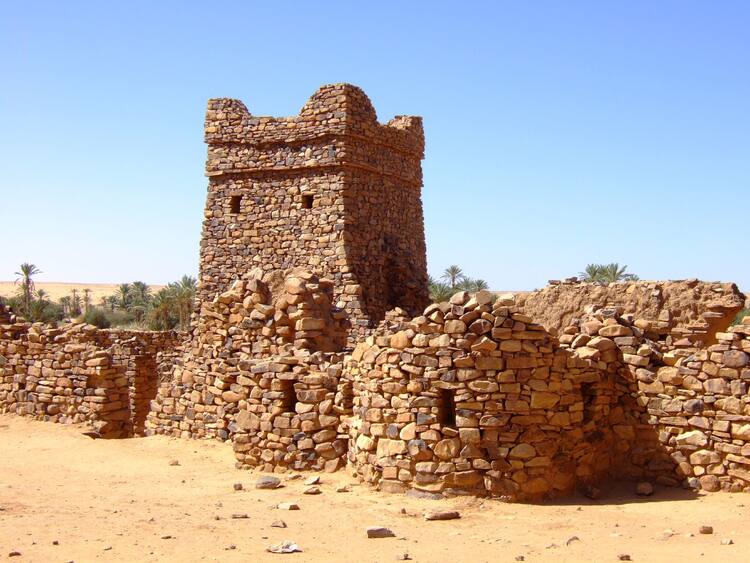 Developed between the 12th and 16th centuries, the towns constitute a series of stages along the trans-Saharan trade route with a remarkably well preserved urban fabric, and houses with patios densely-packed into narrow streets around a mosque with a square minaret.  They bear witness to a traditional lifestyle, centred on the nomadic culture of the populations of Western Sahara.  The medieval towns retain a specific safeguarded urban morphology with narrow and winding lanes, houses built around central courtyards and an original decorative stone architecture. They also illustrate outstanding examples of the adaptation of urban life to the extreme climatic conditions of the desert, both as regards construction methods and the occupation of space and agricultural practices.

Revel in Earth as Art. Make sure you watch in glorious 1080p. Landsat missions were launched for scientific purposes, but they make up one of the most awe-inspiring collections of beautiful images of our home planet.

So take this tour of Earth’s great landforms as seen from space. We travel to Africa and the Sahara and Namib deserts, to Argentina and Bolivia, the American heartland, and the great Canadian land and ice forms. Then it’s on to Greenland, Iceland, Russia, India, China, and finally the continent down under.

Atlantis from space. The clues all point to the Eye of the Sahara as the Mythical lost city. History appears to line up with observed structures.