How green is the valley and sometimes with flowers.   This is the City of Gold – Egoli – Mining and millons of people, but to make you environment part of you – a place and space to live.   Here are also millions of immigrants.  It is also NOT a safe place to live – crime is the ruler here in one of the biggest cities of South Africa.   During 2018, the World Economic Forum has released a list of cities with the most trees, Durban and Johannesburg made the top 10 and we are overjoyed! 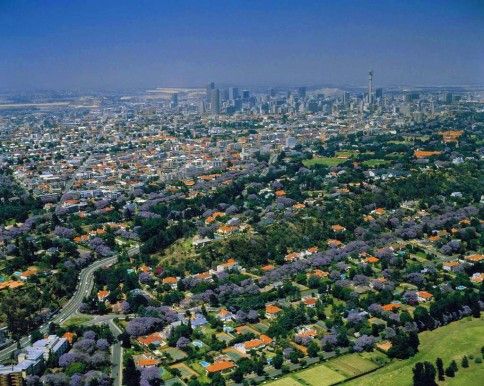 Trees are healthy and produce oxygen.

To get a clearer picture of which cities have the most tree coverage today, MIT’s Senseable Lab partnered with the World Economic Forum (WEF) to create Treepedia. Treepedia is a site with interactive maps that show the density of greenery in major cities around the world.    The World Economic Forum recently released a list of the 19 cities with the most trees. South Africa was featured twice, both within the top 10. 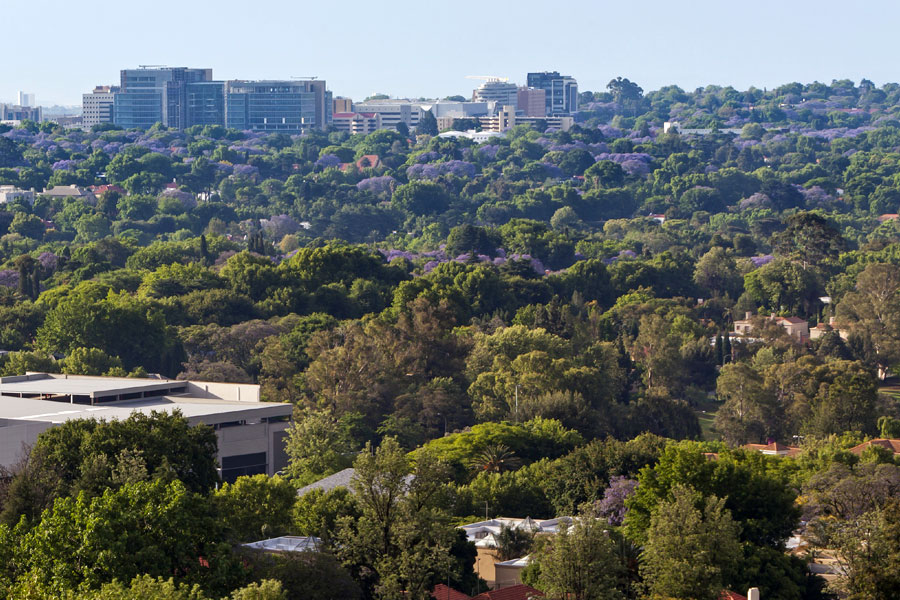 Johannesburg came in 8th with 23.6% and Durban came in 7th with 23.7%. Cape Town is also on the Treepedia database (currently no other South African cities are featured) and has a rating of 13.4%.

Satellite pictures of Johannesburg closely resemble a rambling rainforest, yet savannah grassland scattered with shrubs was endemic to the area. How did the forest begin, and who planted those first trees?

It all started with a small shanty-town in 1886. In 1888 the Braamfontein Cemetery was opened, followed by Joubert Park, and by 1903 Johannesburg had 10 parks and one cemetery.

Before gold was discovered in the area in 1886, there were several farmers on the Witwatersrand.
These early farmers brought seeds from the Cape and planted oak and walnut trees.

The Bezuidenhout family were among the first white settlers in the area and built their farmhouse in 1863 on the farm Doornfontein. They planted fruit trees in Judith’s Paarl and Cyrildene, east of the city centre, but the trees no longer exist.

The farm had a “walnut walk”, an avenue of walnut trees leading to the present-day bowling green. Walnut trees only last about 50 years, so the walk and trees are long gone. A curved row of around six glorious large oak trees remain in front of the house, probably offspring of the original oak trees.

On the other side of town was the farm Braamfontein, owned by Louw Geldenhuys, who built his farmhouse against the Melville Koppies ridge. His wife, Emmarentia, planted an oak tree and five palm trees in front of the house. These trees still exist, as does the house.

When the suburb of Emmarentia was laid out in 1937, the town planners wanted to cut down the oak tree because it was in the path of a road. Emmarentia put her foot down – the oak was to stay. The tree is now on the pavement.

Tree planting commenced in areas such as Soweto, Orange Farm, Alexandra, Lenasia and Eldorado in earnest and over 240 000 trees have been planted as part of this process.

The first early park laid out for the rapidly growing city was Joubert Park, in 1887. Early photographs of the park show a neatly planned Victorian parkland, with a variety of conifers.

A stroll through the Braamfontein and Brixton cemeteries (laid out in1887 and 1912 respectively), north-west of the city centre, will reveal many majestic old trees, among them oaks, pines, cork oaks, and blue gums.

The modern Johannesburg skyline showing the large number of exotic trees. This is the largest man-made forest in the world registering on satellite images as a tropical rainforest, posing specific challenges to water supply engineers today. Source: Rand Water.

As the demand for trees grew, plants were imported from KwaZulu-Natal, but also from overseas. By 1904 a parks department had been established to care for the city’s four major parks: Joubert Park, End Street Park in Doornfontein, Oval Park in Parktown and Jeppe Park.

By 1934 the number of parks had increased to 67, and there was an active tree-planting policy by the council, with 8 000 trees being planted each year.

The first residential suburb of the wealthy Randlords was Doornfontein, east of the city. But there were not enough trees in the basin below the Hillbrow ridge and when the wind blew, Doornfontein became a dustbowl.

At the time, Geldenhuys started selling the western portions of his farm Braamfontein, which became the early northern suburbs of the city: Parktown, Parkview and Forest Town.

Parktown became the suburb of the Randlords, who actively started planting trees, so that within a short time it became known as the “garden suburb”. Large plane trees can still be seen in Parkview. Parktown has some large pepper trees which were originally planted near the stables to ward off fleas.

One of the demands of deep level mining was wooden props to line the underground tunnels. Over a million trees were planted in what are now known as Zoo Lake and the Johannesburg Zoo, in what is now Saxonwold, an area of 1 300 acres.

They were blue and red gum trees, quick-growing and ideal for use as mine props.

Oaks, pines and wattles were also planted. Picnic spots with benches were created in the forest, and it became a favourite picnic and riding area.

Remnants of the forest can still be seen and suburbs subsequently established in the area reflect this history in their names.

Johannesburg is now an urban forest with about 10-million trees, over 2 343 parks and 36 cemeteries.

Since 2006, there has been a massive effort to extend this forest into Soweto through the Soweto Greening Project, which began that year with 6000 trees being planted. By 2010, there were more than 200 000 trees planted in Soweto.

Tree planting took a huge leap forward when gold was discovered in 1886. The early mining companies developed a nursery at the Horticultural Training Centre at Zoo Lake, where experiments were conducted to test which trees were suitable for mine props. This resulted in blue gums being planted in areas with water like Saxonwold, Parktown, Langlaagte, Craighall and Fairlands.

But it’s the Jacaranda that has become synonymous with Joburg. While Pretoria may be unofficially known as the Jacaranda City with more than 70,000 trees lining its streets, it is Johannesburg that actually has more Jacaranda trees, with the first tree planted at Charlton Terrace in Doornfontein back in the early forties.

The word ‘Jacaranda’ is believed to mean ‘fragrant’ in a native South American dialect, and the trees are known for their gorgeous purple blossoms. Having said this, some species boast beautiful white petals, although they’re much more rare in South Africa. These white wonders can be found in Herbert Baker street in Groenkloof, Pretoria.

Johannesburg residents don’t just benefit from the aesthetic beauty of our “man-made forest”. Nature is so mentally restorative that it gives our minds a rest from the forced, direct attention that modern life and urban environments increasingly call for. It also relieves mental fatigue, and can bring down cortisol levels in walkers, which means less stress. One large tree can absorb 150kg of carbon dioxide a year, as well as filter some of the airborne pollutants, including fine particulates…helping us to breathe and ultimately live better, healthier lives.

Joburg. The Largest Man-Made Urban Forest in the World

Top 10 cities with the most trees

The Tijuca Forest (Portuguese: Floresta da Tijuca) is a tropical rainforest in the city of Rio de Janeiro, Brazil.    It is claimed to be the world’s largest urban forest, covering some 32 km² (12.4 mi²), although there are sources assigning this title to the urban forest of Johannesburg, South Africa, where between 6 and 9.5 million trees were planted.    Similar to Rio de Janeiro’s Tijuca Forest, the UNESCO World Heritage Site Singapore Botanic Gardens (established in 1859) is another renowned garden with a tropical rainforest within its city limits.

The Tijuca Forest is a man-made reclamation of land around Rio de Janeiro that had previously been cleared and developed to grow sugar and coffee.

Not only do trees reduce carbon emissions, they considerably improve Johannesburg’s residents quality of life. On satellite pictures, the city looks like a rain forest, albeit man-made. There are 1.2 million trees within the parks and on the pavements, and 4.8 million in private gardens throughout the suburbs.

You might not know this but Johannesburg is the largest landlocked city in the entire world. Sure there are bigger cities, but they are either coastal or built on a lake or river – so we’re saluting Johannesburg for now.