Witbank is not “White” anymore.   You can not see anything there.    Coal power stations are the biggest culprits in the hotspot area.   Greenpeace says an analysis of sophisticated satellite data shows Mpumalanga as the “worst” nitrogen dioxide (NO2) air pollution hotspot across six continents.    It has been reported before that the Witbank area has the world’s dirtiest air‚ and now this analysis of high-tech satellite data has revealed that the Mpumalanga province is the global number one hotspot for NO2 emissions‚” said Melita Steele of Greenpeace Africa.
Normaalweg word daar begroot vir rehabilitasie, want daar is wel myngroepe wat dit doen – wat van die res? Hoekom lyk myne so en betrokke ministeries doen niks daaraan nie en wat word van die rehabilitasiefondse om te rehabiliteer? The satellite data used in the analysis was taken from June 1 to August 31. It shows that Johannesburg and Pretoria are also affected by NO2 pollution‚ which is blown across from Mpumalanga by regular easterly winds.   The list of the world’s nitrogen dioxide hotspots is made up of places where there are coal-fired power plants – in South Africa‚ Germany and India‚ as well as nine coal-powered industrial clusters in China.

eMalahleni, home of coal, is the heartbeat of the economy but it’s said to have the dirtiest air in the world.

Harmful to residents and the atmosphere, one of them is Little Princess Mathebula. The four year old is struggling to breathe she needs oxygen.

Mbali Mathebula a mother says: “She is no longer going to school because of pollution. She has got a heart problem and sometimes itching, at night we don’t sleep nicely.”

Residents of eMalahleni in Mpumalanga are concerned about their health. Many have complained of respiratory problems. The city has been identified as having the dirtiest air quality in the world. The European Space Agency conducted research using satellite imagery. Greenpeace released satellite data from June to August 2018 which reveals the world’s largest Nitrogen Dioxide (NO2) air pollution.

Princess is not alone. Tumelo Ledwaba started getting sick at seven-months-old. The 13-year-old’s life has never been the same since.

She’s short of breath, coughs and suffers from sinusitis and eye problems.

Studies have shown that people who live in areas that have high volumes of pollution are more likely to seek treatment for lungs and heart disease compared to those in less polluted areas.

Dr Diphalong Mashifane, a medical doctor, has treated many patients with similar symptoms and says: “Mainly what we see is respiratory problems, people developing sinuses, and general in the past years this area Middelburg, Witbank, and surrounding areas we had a lot of people.”

“Air pollution is a global health crisis, with up to 95% of the world’s population breathing unsafe air. South Africa is a significant global hotspot with its high concentration of coal power stations and its weak air pollution standards. Our Government urgently needs to come up with an action plan that protects millions of people, instead of dirty coal power stations,” continued Steele. “Because South Africa’s coal-belts are hidden from view for the majority of South Africans, it can be easy to pretend that they don’t actually exist. The reality is that coal extraction and burning has devastating impacts on the people living in the area. This satellite data now confirms that there is nowhere to hide: Eskom’s coal addiction in Mpumalanga means that millions of people living in Johannesburg and Pretoria are also impacted by the pollution from coal,” continued Steele. Late last year, the analysis of satellite data showing air pollution around the world revealed that the coal town of Emalahleni in Mpumalanga is the largest nitrogen dioxide hotspot across six continents. With the World Health Organisation estimating that seven million people around the world die from air pollution every year, what can local government do to respond to the public health crisis? Carte Blanche travelled from the town with the dirtiest air in the world, to Vaxjo in Sweden, a town striving to be the greenest in Europe, to learn how South Africa, can clean up its air pollution. That article was still as relevant as ever when two weeks ago, CER Executive Director Melissa Fourie took the same flight with the Bateleurs: taking off east of Johannesburg and flying south towards Ogies and Kriel, Hendrina to Arnot and Middelburg, and then back via eMalahleni. A year later, the devastating effects of coal-fired power, fed by vast opencast coal mines that decimate water resources, biodiversity and productive agricultural land, remain frighteningly evident.

A thick layer of smog lies over large parts of the Highveld – much more visible from the air than by those who have no choice but to breathe it. There are at least two power stations, sometimes three, wherever you look. Thousands of hectares of previously-fertile land and functioning ecosystems lie destroyed by opencast coal mining – even land that has been “rehabilitated” post coal mining, of which there is precious little in South Africa – can never again support productive crop-growing.

The Department of Mineral Resources continues to grant mining rights across the Highveld, often in areas of sensitive and irreplaceable biodiversity, and in precious fresh water catchment areas. The failure of this Department to conduct any cumulative impact assessments, to take into account the objections of other organs of state to the granting of new licences, and to conduct any meaningful enforcement of compliance with environmental laws, has created a toxic mess that poses a severe threat to South Africa’s food and water security. And to make matters worse, the Department of Environmental Affairs has now granted Eskom, Sasol and other polluters five – and in many cases ten – more years to pollute at levels that exceed South Africa’s already-weak emission standards, despite the clear and proven health risks posed by current poor air quality on the Highveld. While new Eskom power station Kusile is still being built, at least three more privately funded coal-fired power stations are being planned for the Highveld. The provincial government and local authorities seem unable or unwilling to even try to stop this juggernaut.

And we continue to wait, despite years of promises, for Cabinet to approve a strategy to address toxic domestic coal burning for those who live amongst the power stations, but cannot access or afford electricity.
https://cer.org.za/news/in-pictures-what-coal-is-doing-to-the-mpumalanga-highveld Coal mines within the Witbank Coalfield are owned and operated by a number of coal mining companies, while many mines are abandoned and may be classified as “derelict and ownerless” in terms of Section 46 of the Minerals and Petroleum Resources Development Act (Act 28 of 2002). This mining district covers a very large area (the catchment feeding the Loskop Dam, the most affected waterbody in the area totals 11,500 km²) and includes mines encompassing all stages of mining, from exploration through modern operating mines, mines undergoing closure. The Council for Geoscience identified a total of 209 abandoned mines in this catchment, including 118 coal mines.

The town of Emalahleni was established in 1890 to establish coal deposits located in the vicinity. This became feasible after 1894, with the construction of a railway line to Pretoria. Since then, Emalahleni and its coalfields have contributed a significant proportion of South Africa’s coal production and the area has become an important industrial town with industries including power generation and steel production.

Water pollution sources in the mining areas include operating, closed and abandoned mines, with acid mine drainage and related metal contamination forming the most important problems. Important sulphide bearing materials which can lead to the formation of acid mine drainage include the coal and discarded material and some of the overburden materials used in the rehabilitation of more modern open-pit operations. In addition, many wetlands and rivers are believed to be clogged with coal dust. Other issues include those common to most mining areas in South Africa, where with the promise or expectation of jobs resulting in the creation of large informal settlements with high levels of poverty and unemployment. The physical and pollution hazards resulting from coal mining exacerbate many of the related societal health problems.
http://www.eo-miners.eu/test_sites/ts_testsite2_witbank.htm 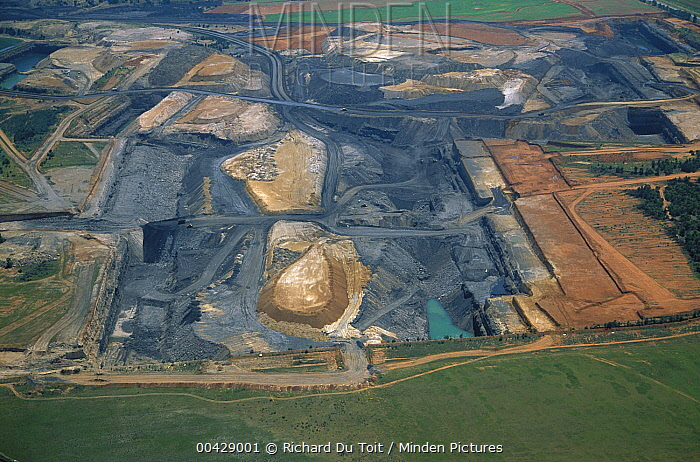