“Citizens of the democratic societies should undertake a course of intellectual self-defence to protect themselves from manipulation and control, and to lay the basis for meaningful democracy.” – Noam Chomsky

Bezmenov explains how Marxist ideology is destabilizing the economy and purposefully pushing the U.S. into numerous crises so that a “Big Brother” tyranny can be put into place in Washington,  how most Americans don’t even realize that they are under attack, and that normal parliamentary procedures will not alter the federal government’s direction. 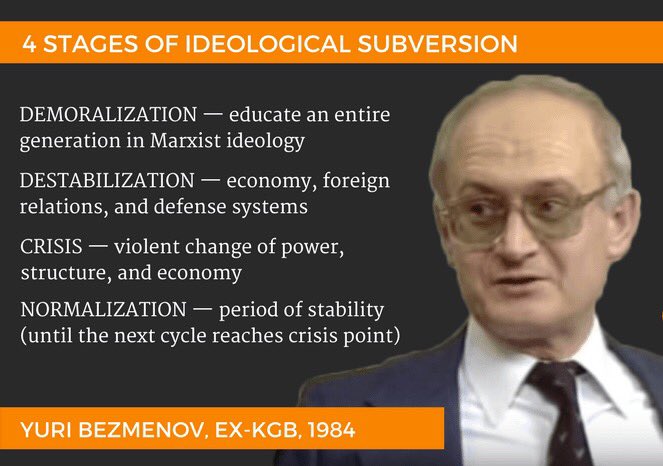 He then explains how Marxist leaders use informers to make lists of anti-Communist and other politically incorrect people who they want to execute once they – actually a Jewish oligarchy – came to power.  The oligarch’s secret lists include “civil rights” activists and idealistically-minded “useful idiot” leftists as well.

Bezmenov provides several real world examples of how Marxist leaders even execute and/or imprison each other.  He also explains how American embassy employees were known to betray Soviets attempting to defect, how there existed a “triangle of hate” in the Soviet government, why he realized that Marxism-Leninism was a murderous doctrine, and how the CIA ignored (or didn’t care) about Communist subversion.

He also mentions that revolutions throughout history are never the result of a majority movement, but of a small dedicated and highly-organized group who seize power, whether for good or bad.  Next he explains how the American mass media spread lies about life in the Soviet Union.

Bezmenov also explains how the LOOK magazine article falsely claimed that the Russian people were proud of their victory in the Second World War, where in reality the Judeo-Bolshevik-Communist-Marxist government was happy that Hitler had been defeated so that they could remain in power.

“The conscious and intelligent manipulation of the organized habits and opinions of the masses is an important element in democratic society. Those who manipulate this unseen mechanism of society constitute an invisible government which is the true ruling power of our country. We are governed, our minds are moulded, our tastes formed, our ideas suggested, largely by men we have never heard of. This is a logical result of the way in which our democratic society is organized. Whatever attitude one chooses to take toward this condition, it remains a fact that in almost every act of our daily lives, whether in the sphere of politics or business, in our social conduct or our ethical thinking, we are dominated by the relatively small number of persons who understand the mental processes and social patterns of the masses. It is they who pull the wires which control the public mind, who harness old social forces and contrive new ways to bind and guide the world.” – Edward Bernay’s, from his book, “Propaganda.”

Marxism-Leninism ideology is being pumped into the soft heads of at least 3 generation of American students without being challenged or counterbalanced by the basic values of Americanism, American patriotism.
The result? The result you can see – most of the people who graduated in the 60’s, dropouts or half-baked intellectuals, are now occupying the positions of power in the government, civil service, business, mass media, and educational systems. You are stuck with them. You can’t get through to them. They are contaminated. They are programmed to think and react to certain stimuli in a certain pattern. You can not change their mind even if you expose them to authentic information. Even if you prove that white is white and black is black, you still can not change the basic perception and the logic of behavior.

To rid society of these people you need another 15 or 20 years to educate a new generation of patriotically minded and common sense people who would be acting in favor and in the interests of United States society.

And yet these people who have been programmed and as you say are in place and who are favorable to an opening with the Soviet concept – these are the very people who would be marked for extermination in this country?

Most of them, yes. Simply because the psychological shock when they will see in the future what the beautiful society of EQUALITY and social justice means in practice, obviously they will revolt. They will be very unhappy and frustrated people, and Marxist-Leninist regime does not tolerate these people. Obviously they will join the ranks of dissenters, dissidents. Unlike the present United States there will be no place for dissent in future Marxist-Leninist America. Now you can get popular like Daniel Elsburg and filthy rich like Jane Fonda for being a dissident and for criticizing your Pentagon. In the future these people will simply be squashed like cockroaches for criticizing the government. Nobody is going to pay them nothing for their beautiful and noble ideas of EQUALITY. This they don’t understand and it will be the greatest shock for them, of course.

The demoralization process in the United States is basically completed already for the last 25 years… Most of it is done by Americans to Americans thanks to lack of moral standards. As I mentioned before, exposure to true information does not matter anymore. A person who was demoralized is unable to assess true information. The facts tell nothing to him, even if I shower him with information, with authentic proof, with documents and pictures. …he will refuse to believe it…. That’s the tragedy of the situation of demoralization.

Most of the American politicians, media, and educational system train another generation of people who think they are living at the peacetime. False. United States is in a state of war. Undeclared, total war against the basic principles and foundations of this system.

Okay, so what do we do? What is your recommendation to the American people?

Well, the immediate thing that comes to mind is, of course, there must be a very strong national effort to educate people in the spirit of REAL patriotism, number one. Number two, to explain to them the real danger of socialist, communist, welfare state, Big Brother government…. The moment at least part of the United States population is convinced that the danger is real, they have to FORCE their government, and I’m not talking about sending letters, signing petitions, and all this beautiful, noble activity, I’m talking about FORCING the United States government to stop aiding Communism…. and it is very easy to do: no credits, no technology, no money, no political or diplomatic recognition…