Land not the focus of Sisulu, Pompeo meeting 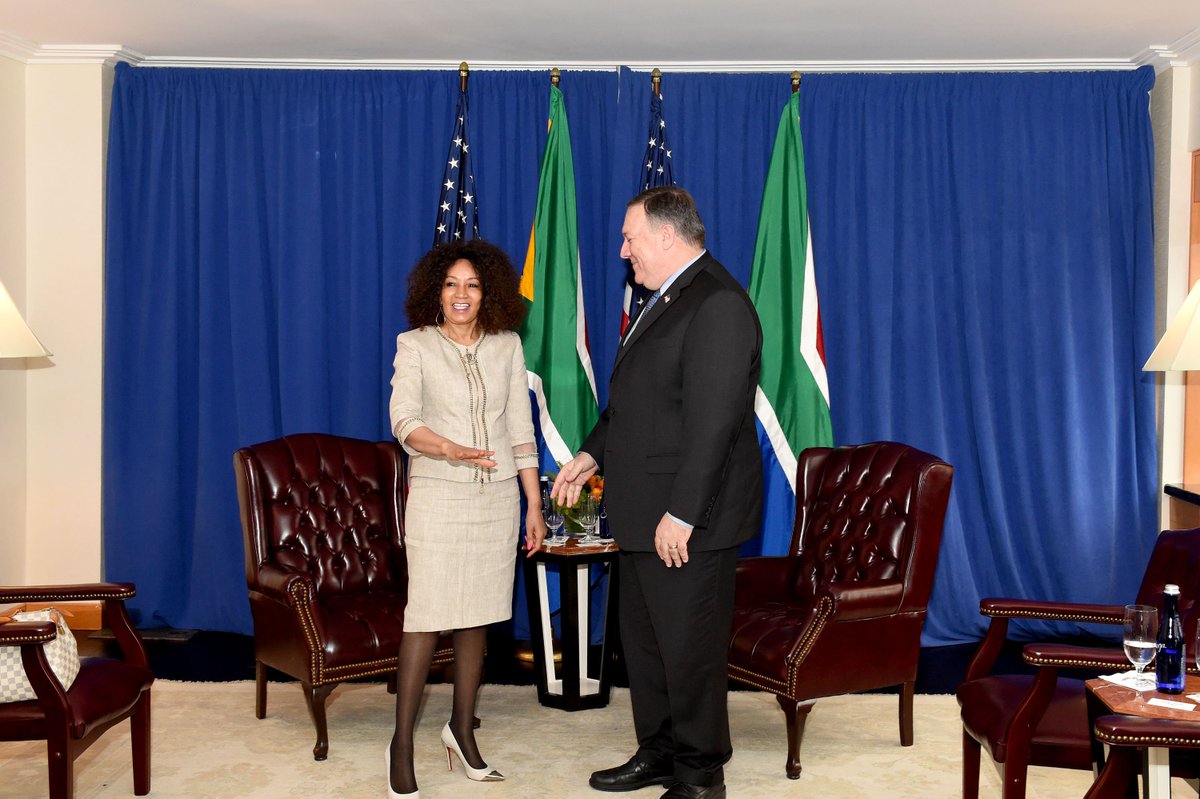 International Relations and Cooperation Minister Lindiwe Sisulu says the issue of land is not high on the agenda of her upcoming meeting with her US counterpart Mike Pompeo.

Addressing media at her department’s monthly briefing, Sisulu said the United States of America understands that the land reform process undertaken by South Africa is a constitutional matter that will be adequately addressed.

In August, US President Donald Trump took to Twitter to comment on South Africa’s planned land expropriation without compensation, and ordered Pompeo to look into the matter.

“It is not a matter that will be a priority in our discussions. We have a great deal to talk about,” Sisulu said, adding that the matter had been raised in the first meeting between the two.

“They issued a statement indicating that the process outlined by ourselves is a constitutional process. It is a process within our laws and it will be handled properly, so there was no need for us to talk about that, but we agreed that for any [American companies] wanting to invest in South Africa, if there was any still lingering concern, we will make sure that we educate them,” the Minister said.

Towards the end of November, Sisulu will embark on a working visit to the USA. The trip follows a bilateral meeting on the margins of the United Nations General Assembly in September 2018 with Pompeo, during which it was agreed that another meeting would be held before the end of the year.

On Monday, Sisulu said South Africa’s position on land has been reiterated by President Cyril Ramaphosa on various platforms.

“When we had the investment conference, the President discussed this matter at length. When I was at the IORA [Indian Ocean Rim Association], I discussed this matter at length. If there is anyone out there still [with] land [concerns], we will be able to provide a solid dossier on how this is a constitutional requirement. The processes we have undertaken have been painstakingly put together,” she said.

The meeting invite by Pompeo, Sisulu said, is for something totally different.

“We need to share some ideas on how we are going to work together on what it is that we have in common and what we don’t have in common, and work on that. America remains a very important trading partner for South Africa and we’d like to make sure that our relations are [sound].”

Meanwhile, President Ramaphosa will this month embark on a series of international engagements that will see him travel across the world.

His first engagement will be from 14 to 15 November 2018, when he leads a South African delegation on a working visit to the European Union (EU) in France and Belgium.

The President will then meet with Belgium King Philippe Leopold Louis Mari and Kingdom Prime Minister Charles Michel in the country’s capital city, Brussels. He will also receive a courtesy call from Flanders Minister-President Geert Bourgeois.

South Africa is the only African country, and one of 10 countries globally, that has a Strategic Partnership with the EU.

Later this week, President Ramaphosa will also lead a South African delegation to Addis Ababa, Ethiopia for the 11th Extraordinary Session of the Assembly of the African Union (AU) scheduled for 17 to 18 November 2018.

“The main focus of the 11th Extraordinary Session of the Assembly will be on the AU institutional reform process. The session is also expected to take stock of progress made on the reform process, discuss outstanding issues and challenges, and consider various reform proposals and recommendations. South Africa supports the institutional reform of the AU and the creation of an efficient and cost-effective union.

“We will be travelling to Russia to attend the 15th Session of the Joint Intergovernmental Committee on Trade and Economic Cooperation (ITEC) between South Africa and Russia.

“The ITEC session is an annual bilateral economic cooperation mechanism between South Africa and the Russian Federation. The last ITEC took place in South Africa in 2016. Due to a number of commitments affecting our countries, we were unable to meet last year,” said Sisulu.

During the briefing, Sisulu described President Ramaphosa’s recent working visit to Germany for the G20 Investment Summit and the G20 Compact with Africa Conference as successful.

“The visit sought to cover a number of areas, which included a trade and investment drive and cementing bilateral relations between the two countries. The visit augured well with South Africa’s investment drive to raise over R1 trillion over the next five years, as hundreds of German companies are currently running their businesses in South Africa,” she said.

Last month also saw Deputy DIRCO Minister Luwellyn Landers undertake a working visit to Tunis for the first session of the South Africa-Tunisia Diplomatic Consultations, seen as a catalyst to strengthen relations between the two countries.

Sisulu said the visit was to strengthen bilateral and multilateral cooperation between the two countries.

“We agreed on intensifying economic relations between our countries,” Sisulu said. –

Support self-determination and a political party that want to go forward with a mandate.  Vote for them in 2019.