This concept is not new.  Most of them are self-sufficient villages and farms.  On the one farm is nice photos and between the tree crops, the grassy alleys are often grazed by cows, pigs, turkeys, sheep, pigs or chickens. These systems are building soil, retaining water, sequestering carbon, diversifying habitat, and cultivating the human being and our ecology.    The farm is entirely solar and wind powered and farm equipment has the capacity to be powered with locally produced biofuels that are not taken from the human food chain.  You can build on old towns or new ones. 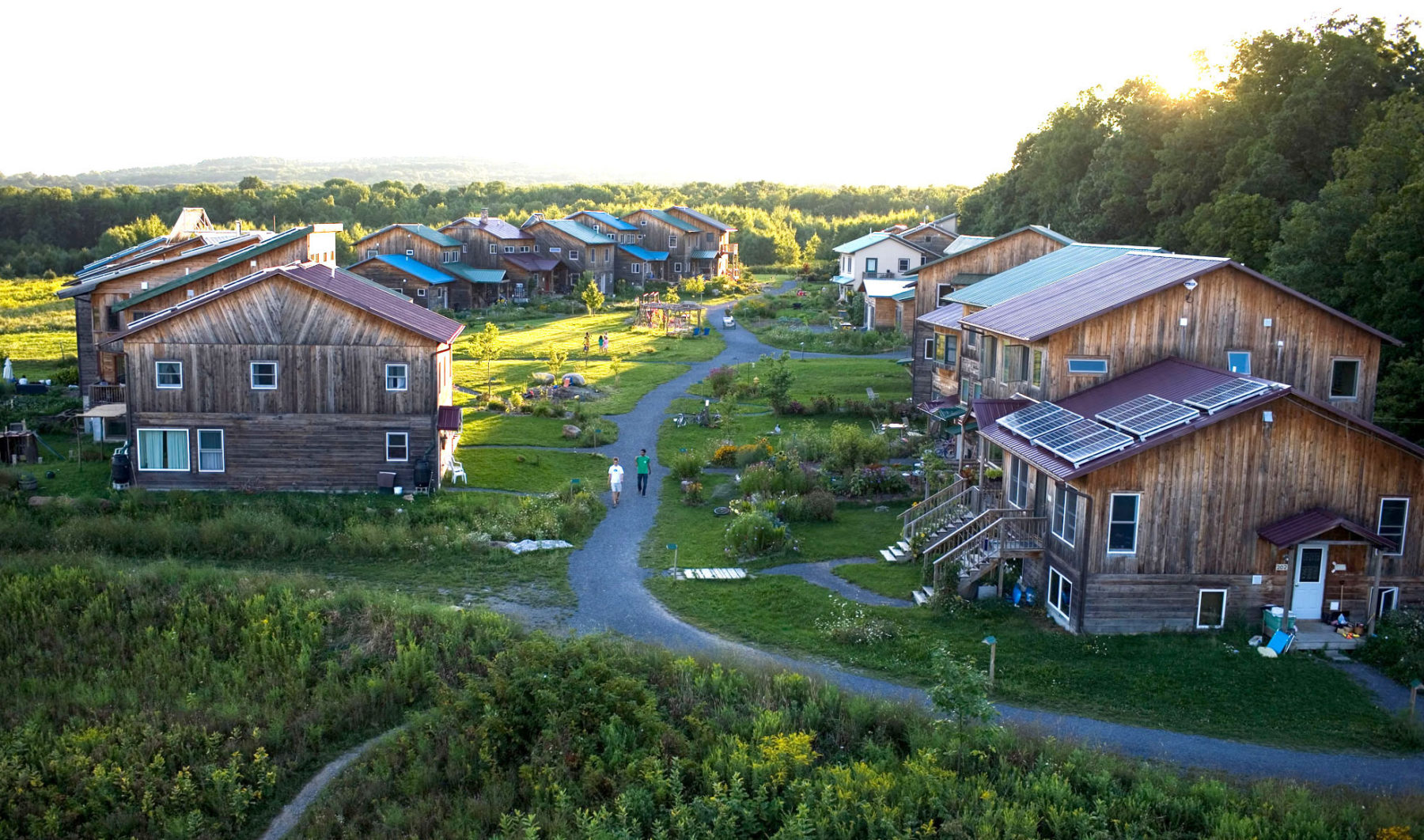 Now it is a paradise:

In the early 90s, Mark and Jen Shepard bought a degraded corn farm in Viola, Wisconsin, and began to slowly convert it from row-crops back to a native oak savanna that would become one of the most productive perennial farms in the country. After 8 years of homesteading in Alaska (arriving just as the Homestead Act was expiring) where they had been forced by low-paying jobs to discover “which trees, shrubs, bushes, and vines we could get food from”, they arrived in the Driftless Area of Wisconsin ready to apply their knowledge of permaculture (“permanent agriculture”).

Over the past nearly three decades, Mark has planted an estimated 250,000 trees on the 106-acre farm. The main agroforestry crops are chestnuts, hazelnuts, and apples, followed by walnut, hickory, cherry, and pine (for the nuts). For short-term income, the couple planted annual crops, like grains and asparagus, in alleys between the fruit-and-nut-bearing trees. Cattle, pigs, lambs, turkeys, and chickens act as pest control and free composters as they roam the savannas of the farm.

Not content to rely on commercially-produced seeds, Mark does his own breeding to find the best-adapted trees to his region using the method he’s dubbed STUN (Sheer Total Utter Neglect). He plants trees at a higher density than recommended and with as much diversity as possible (at one point they were farming 219 varieties of apples) and then lets pests and disease run their course. He fells diseased trees or those that don’t bear enough, or early enough, fruit. The result is orchards hardy enough to survive even Chestnut Blight. As more and more of the alley crops have been replaced with trees and pocket ponds to help manage water on the farm, the land here has returned to the native savannas where the mastodon once grazed 12,000 years ago (in 1898 bones were discovered 5 miles down the road). New Forest Farm has inspired many other perennial farms, especially chestnut farmers in the region, and Mark hopes that every schoolchild will plant their own apple seeds (and perhaps subject them to STUN) and that every family can plant a backyard food forest.

Overall, the land attempts to mimic the oak savanna biome. Trees, shrubs, vines, canes, perennial plants and fungi are planted in association with one another to produce food, fuel, medicines, and beauty. Hazelnuts, chestnuts, walnuts, apples, and elderberries are the primary woody crops, and are planted along a keyline™-inspired water management pattern.

Founded and stewarded by the Shepard family for over 20 years, the land is one of the country’s most ambitious large-scale conversions of former degraded corn farm into a perennial agricultural ecosystem.

11 Eco-villages across the world.

When they first began to rebuild, there was no road up to the town so horses were used to carry construction materials up the mountain. There was no electricity either so they lived with candles and oil lamps.   After a few years, they erected a windmill by hand, carrying the iron structure up the hill themselves. “Even though it seems tough and in some ways it was, but you realize you’re not as limited as you think,” says Mauge. “There are a lot of things people think they can’t do without a lot of money and there’s never been money here.”

It’s a utopian fantasy- discover a ghost town and rebuild it in line with your ideals-, but in Spain where there are nearly 3000 abandoned villages (most dating back to the Middle Ages), some big dreamers have spent the past 3 decades doing just that. There are now a few dozen “ecoaldeas” – ecovillages – in Spain, most build from the ashes of former Medieval towns. One of the first towns to be rediscovered was a tiny hamlet in the mountains of northern Navarra. Lakabe was rediscovered in 1980 by a group of people living nearby who had lost their goats and “when they found their goats, they found Lakabe”, explains Mauge Cañada, one of the early pioneers in the repopulation of the town. The new inhabitants were all urbanites with no knowledge of country life so no one expected them to stay long. When they first began to rebuild, there was no road up to the town so horses were used to carry construction materials up the mountain. There was no electricity either so they lived with candles and oil lamps.
In the early years, they generated income by selling some of their harvest and working odd jobs like using their newfound construction experience to rebuild roofs outside town. Later they rebuilt the village bakery and sold bread to the outside world. Their organic sourdough breads now sell so well that today they can get by without looking for work outside town, but it helps that they keep their costs at a minimum as a way of life. “There’s an austerity that’s part of the desire of people who come here,” explains Mauge.
“There’s not a desire for consumption to consume. We try to live with what there is.” Today, the town generates all its own energy with the windmill, solar panels, and a water turbine. It also has a waitlist of people who’d like to move in, but Mauge says the answer is not for people to join what they have created, but to try to emulate them somewhere else. “If you set your mind to it and there’s a group of people who want to do it, physically they can do it, economically they can do it. What right now is more difficult is being willing to suffer hardship or difficulties or… these days people have a lot of trouble living in situations of shortage or what is seen as shortage but it isn’t.”

The EcoVillage at Ithaca was established in 1991 and has become a mature communal village with three neighborhoods developed on 10% of the land with 90% of the land devoted to farmland and natural areas. Given that we’re interested in communally living at Flock, we took quite a bit of notes from the EcoVillage, which is celebrating their 30th anniversary this year.

EcoVillage at Ithaca is part of a global movement of people seeking to create positive solutions to the social, environmental and economic crises our planet faces. Since 1991 we have developed an award-winning ecovillage that invites you to live, learn and grow. Our mission is to promote experiential learning about ways of meeting human needs for shelter, food, energy, livelihood and social connectedness that are aligned with the long-term health and viability of Earth and all its inhabitants.