Die SA Parlement, met die hulp van provinsies en ander politieke organisasies maak die wetgewings wat geïmplementeer word.
SA Parliament is the national legislature (law-making body) of South Africa. As such, one of its major functions is to pass new laws, to amend existing laws, and to repeal or abolish (cancel) old laws. This function is guided by their Constitution of South Africa, which governs and applies to all law and conduct within South Africa. 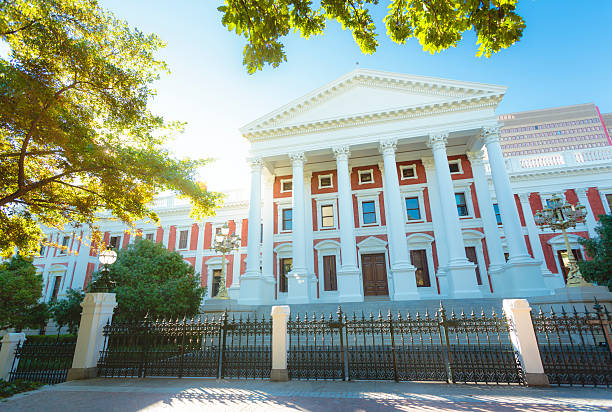 Who Makes the Laws?

Both Houses of Parliament, the National Assembly (NA) and the National Council of Provinces (NCOP), play a role in the process of making laws. A Bill or draft law can only be introduced in Parliament by a Minister, a Deputy Minister, a parliamentary committee, or an individual Member of Parliament (MP). About 90% of Bills are initiated by the Executive.

‘property‘ means money or any other movable, immovable, corporeal or incorporeal thing, and includes any rights, privileges, claims and securities and any interest therein and all proceeds thereof;

‘public transportation system’, with reference to section 5, means all facilities, conveyances and instrumentalities, whether publicly or privately owned, that are used in or for publicly available services for the transportation of persons or cargo;

‘place of public use‘, with reference to section 5, includes those parts of any building, land, street, waterway or other location that are at any time accessible or open to members
of the public, whether continuously, periodically or occasionally;

(a) any act committed in or outside the Republic, which-
(i) involves the systematic, repeated or arbitrary use of violence by any means
or method;

(ii) involves the systematic, repeated or arbitrary release into the environment
or any part of it or distributing or exposing the public or any part of it to-
(aa) any dangerous, hazardous, radioactive or harmful substance or organism;
(bb) any toxic chemical; or
(cc) any microbial or other biological agent or toxin;

(iii) endangers the life, or violates the physical integrity or physical freedom of, or
causes serious bodily injury to or the death of, any person, or any number of
persons;

(iv) causes serious risk to the health or safety of the public or any segment of the
public;

(v) causes the destruction of or substantial damage to any property, natural
resource, or the environmental or cultural heritage, whether public or private;

(vii) causes any major economic loss or extensive destabilisation of an economic system or substantial devastation of the national economy of a country; or

(viii) creates a serious public emergency situation or a general insurrection in the
Republic,

whether the harm contemplated in paragraphs (a) (i) to (vii) is or may be suffered
in or outside the Republic, and whether the activity referred to in subparagraphs
(ii) to (viii) was committed by way of any means or method; and

(b) which is intended, or by its nature and context, can reasonably be regarded as being intended, in whole or in part, directly or indirectly, to –

(i) threaten the unity and territorial integrity of the Republic;
(ii) intimidate, or to induce or cause feelings of insecurity within, the public, or a
segment of the public, with regard to its security, including its economic security, or to induce, cause or spread feelings of terror, fear or panic in a civilian population; or
(iii) unduly compel, intimidate, force, coerce, induce or cause a person, a government, the general public or a segment of the public, or a domestic or an international organisation or body or intergovernmental organisation or body, to do or to abstain or refrain from doing any act, or to adopt or abandon a particular standpoint, or to act in accordance with certain principles, whether the public or the person, government, body, or organisation or institution referred to in subparagraphs (ii) or (iii), as the case may be, is inside or outside the Republic; and

(c) which is committed, directly or indirectly, in whole or in part, for the purpose of the advancement of an individual or collective political, religious, ideological or philosophical motive, objective, cause or undertaking;

READ THE DOCUMENT AT:

The difficulty in defining “terrorism” is in agreeing on a basis for determining when the use of violence (directed at whom, by whom, for what ends) is legitimate; therefore, the modern definition of terrorism is inherently controversial.   The use of violence for the achievement of political ends is common to state and non-state groups.  The UN Member States still have no agreed-upon definition of terrorism, and this fact has been a major obstacle to meaningful international countermeasures.

Criminal acts intended or calculated to provoke a state of terror in the general public, a group of persons or particular persons for political purposes are in any circumstance unjustifiable, whatever the considerations of a political, philosophical,  ideological, racial, ethnic, religious or any other nature that may be invoked to justify them.

Article 2: Terrorism
Any act or threat of violence, whatever its motives or purposes, that occurs in the advancement of an individual or collective criminal agenda and seeking to sow panic among people, causing fear by harming them, or placing their lives, liberty or security in danger, or seeking to cause damage to the environment or to public or private installations or property or to occupying or seizing them, or seeking to jeopardize a (sic) national resources.

Article 3: Terrorist offence
Any offence or attempted offence committed in furtherance of a terrorist objective in any of the Contracting States, or against their nationals, property or interests, that is punishable by their domestic law. The offences stipulated in the following conventions, except where conventions have not been ratified by Contracting States or where offences have been excluded by their legislation, shall also be regarded as terrorist offences:
(a) The Tokyo Convention on offences and Certain Other Acts Committed on Board Aircraft, of 14 September 1963;
(b) The Hague Convention for the Suppression of Unlawful Seizure of Aircraft, of 16 December 1970;
(c) The Montreal Convention for the Suppression of Unlawful Acts against the Safety of Civil Aviation, of 23 September 1971, and the Protocol thereto of 10 May 1984;
(d) The Convention on the Prevention and Punishment of Crimes against Internationally Protected Persons, including Diplomatic Agents, of 14 December 1973;
(e) The International Convention against the Taking of Hostages, of 17 December 1979;
(f) The provisions of the United Nations Convention on the Law of the Sea, of 1982, relating to piracy on the high seas.

Article 2
(a) All cases of struggle by whatever means, including armed struggle, against foreign occupation and aggression for liberation and self-determination, in accordance with the principles of international law, shall not be regarded as an offence. This provision shall not apply to any act prejudicing the territorial integrity of any Arab State.
(b) None of the terrorist offences indicated in the preceding article shall be regarded as a political offence. In the application of this Convention, none of the following offences shall be regarded as a political offence, even if committed for political motives:
(i) Attacks on the kings, Heads of State or rulers of the contracting States or on their spouses and families;
(ii) Attacks on crown princes, vice-presidents, prime ministers or ministers in any of the Contracting States;
(iii) Attacks on persons enjoying diplomatic immunity, including ambassadors and diplomats serving in or accredited to the Contracting States;
(iv) Premeditated murder or theft accompanied by the use of force directed against individuals, the authorities or means of transport and communications;
(v) Acts of sabotage and destruction of public property and property assigned to a public service, even if owned by another Contracting State;
(vi) The manufacture, illicit trade in or possession of weapons, munitions or explosives, or other items that may be used to commit terrorist offences.

A.2. ORGANISATION OF AFRICAN UNITY(OAU) CONVENTION ON THE PREVENTION AND COMBATING OF TERRORISM

Terrorism: No definition of “terrorism” in OAU Convention.

(a) any act which is a violation of the criminal laws of a State Party and
which may endanger the life, physical integrity or freedom of, or cause
serious injury or death to, any person, any number or group of
persons or causes or may cause damage to public or private property,
natural resources, environmental or cultural heritage and is
calculated or intended to:
(i) intimidate, put in fear, force, coerce or induce any government,
body, institution, the general public or any segment thereof, to
do or abstain from doing any act, or to adopt or abandon a
particular standpoint, or to act according to certain principles;
or
(ii) disrupt any public service, the delivery of any essential service
to the public or to create a public emergency; or
(iii) create general insurrection in a State.
(b) any promotion, sponsoring, contribution to, command, aid,
incitement, encouragement, attempt, threat, conspiracy, organizing,
or procurement of any person, with the intent to commit any act
referred to in paragraph (a) (i) to(iii). “.