Jere Van Dyk was born in Washington state and raised in a family of Plymouth Brethren. He first went to Afghanistan in 1973 when he and his younger brother drove an old Volkswagen from Germany to Kabul. He returned in 1981 as a young reporter for the New York Times and lived with the mujahideen, our allies fighting the Soviet Union. There, and later when he became the director of Friends of Afghanistan, a non-profit organization overseen by the National Security Council and the State Department, he got to know the leaders who were linked from the beginning with al-Qaeda, and the Taliban, with Iran, Pakistan, and Saudi Arabia, and from which emerged the Islamic State.

After 9/11, he returned to Afghanistan and Pakistan for CBS News, for which he covered the kidnapping of Daniel Pearl in Karachi. In 2008, he was the next American journalist kidnapped in Pakistan. He is the author of Captive and In Afghanistan.

Are you still running?

JVD: I’ll tell you a little story. I didn’t realize this, but it turns out that the FBI is in charge of all American kidnappings anywhere. So they took over my case in Pakistan right after I was released. And one of the first things they did was to bring me my running shoes. I had been running regularly in Afghanistan and Pakistan because I knew that a guy my age–late 50s and then early 60s–had to be in top shape for the long treks into the mountains to the Taliban areas. When I saw my running shoes again, that penetrated to the deepest part of me. It touched something very primal. Running is such a very important part of my life. I try to run every second or third day. It’s my peace, my meditation, my solace, my church, my comfort, my fitness. I couldn’t live without it.

On January 13, 1842, a British army doctor reaches the British sentry post at Jalalabad, Afghanistan, the lone survivor of a 16,000-strong Anglo-Indian expeditionary force that was massacred in its retreat from Kabul. He told of a terrible massacre in the Khyber Pass, in which the Afghans gave the defeated Anglo-Indian force and their camp followers no quarter.

On 13 January 1842, a lone figure appeared on the outskirts of Jalalabad, slowly riding an exhausted pony across Afghanistan’s desolate lowland plains. A young officer on the walls of the British fort dispatched a rescue party. When they reached the man, they found a shell of a human being. He appeared lifeless and had a gash to his head that drained down onto his blood-soaked uniform.

The rescue party shook the man awake and asked, “Where is the Army?”

“I am the Army,” assistant surgeon William Brydon replied.

The 30-year-old Scot was the lone survivor of a 90-mile, weeklong escape from the capital city of Kabul. The survivor’s tale, however, was only the beginning of the end of the First Anglo-Afghan War, which lasted from 1839 to 1842.

At the time, the British Empire was a global superpower and the East India Company maintained economic and military prowess over much of the South Asia region. The major threat to British interests was Russian expansionism. Regional competition between the two superpowers in the 19th century was called “the Great Game” in Britain and the “Tournament of Shadows” in Russia. Fearing that Dost Mohammad Khan, the emir of Afghanistan, would ally with the Russians, the British chose to replace him with a deposed leader named Shah Shuja.

“Despite the apparent grandeur of the invading British army, from the outset, the British were ill-prepared for their ‘Afghan War,’” Arwin Rahi, a former adviser to the governor of Parwan province, writes in The Diplomat. “The British officials in charge of the Afghan policy in India neither had a good understanding of Afghanistan and its people, nor bothered to educate themselves about it. The British thought that, like India, they could easily conquer Afghanistan, and bring it under their influence.”

According to an 1839 account by Sita Ram, an Indian army infantryman: “The truth began to dawn on us that despite all the assurances Shah Shuja had given us in Hindustan that the Afghans were longing for his return, in reality they did not want him as their ruler.”

Without securing the local population’s support of their new Afghan leader, the British committed a near fatal miscalculation. In 1840, Pashtun tribes launched attacks across the southern, eastern, and central parts of the country. With the rebellion in full force, Sir William Hay Macnaghten, Britain’s chief  representative to Kabul, and Maj. Gen. William Elphinstone, the commander of the British Army in Afghanistan, struck a deal with insurgent leader and son of Dost Mohammad Khan, Mohammad Akbar Khan, to leave the capital city of Kabul.

On 6 January 1842, a British army contingent of 4,500 troops and 12,000 camp followers left for Jalalabad. For his part, Khan failed to maintain his end of the bargain. While the British moved through deep snow and subzero temperatures in the Khyber Pass, thousands of Afghan tribesmen descended from the high mountaintops to ambush them.

By the night of the sixth day of the disastrous retreat, only 80 British men remained alive, including Brydon. “The confusion was terrible,” Brydon later recalled, according to the Daily Mail. “I was pulled off my horse and knocked down by a blow on the head from an Afghan knife, which must have killed me had I not placed a portion of Blackwood’s Magazine in my forage cap. As it was, a piece of bone was cut from my skull.”

As the Afghan swung for a second blow, Brydon struck him with the edge of his sword first, lopping off the assailant’s fingers. While his attacker scrambled away, Brydon rejoined the remainder of the surviving British troops hunkering down behind a barricade. He then took the horse from a dying cavalryman and rode off alone into the dark night. When dawn arrived, a last stand was fought on a hilltop at Gandamak, during which 20 British officers and 45 privates of the 44th Foot Regiment were surrounded and outgunned.

On his lonesome journey to Jalalabad, Brydon got into frequent scrapes with the Afghans he crossed. He was attacked with stones and knives, but managed to ride on. One Afghan fired a shot that damaged Brydon’s sword and wounded his pony.

“On examination, I had a sword wound on my left knee, besides my head and left hand, and a ball had gone through my trousers, grazing the skin,” Brydon later recalled, according to the Daily Mail.

Brydon survived and later served in the Second Anglo-Burmese War of 1852. He barely escaped the famous siege of Lucknow in 1857. After living the remainder of his life in peacetime, the lucky doctor died in 1873.

The successful defence of Jellalabad in 1841 to 1842  that went a little way to restore the British reputation devastated by the Battles of Kabul and Gandamak.

Map of the Siege of Jellalabad from 12th November 1841 to 13th April 1842 during the First Afghan War: map by John Fawkes 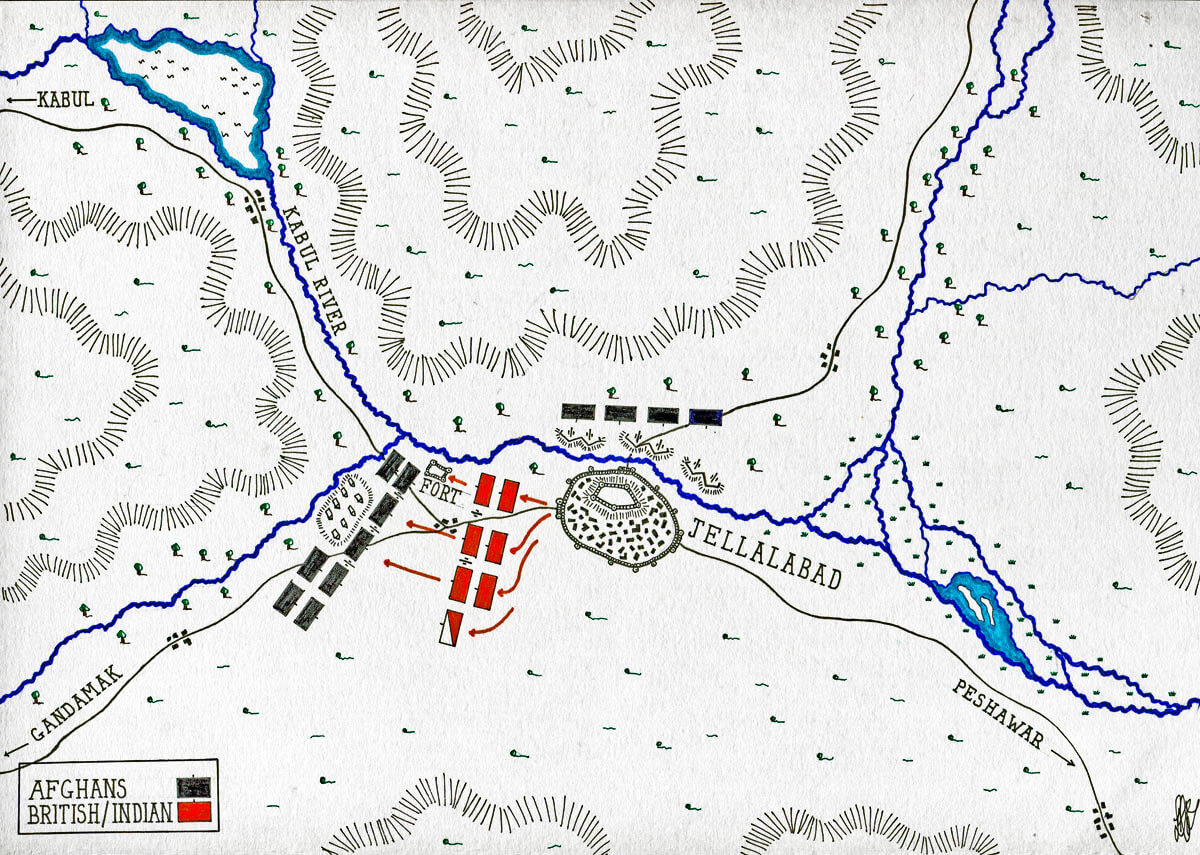 The situation in Afghanistan continues to evolve with acts of violence on the rise. Another battalion from the 82nd Airborne Division is gearing up for deployment to Kabul, which will place another 1,000 or so troops on the ground.