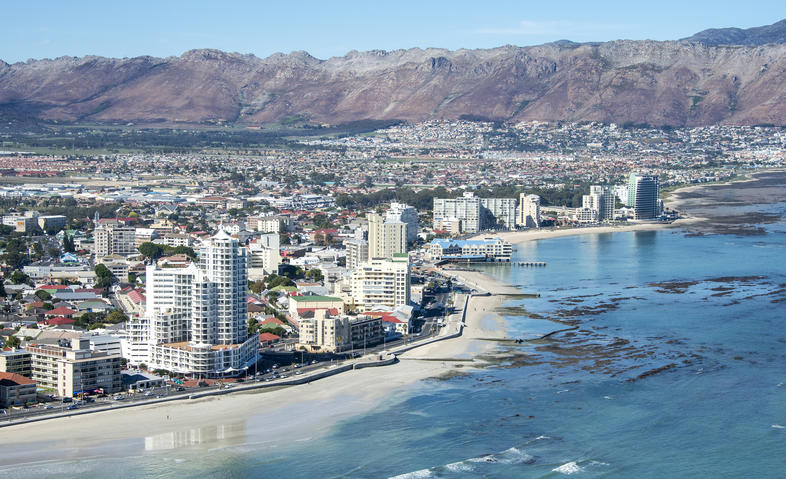 Many years ago – about 1695 – a Corporal of the Dutch East India Company first set foot on the white sands of Milk Bay. It is quite possible that this little bay might have been mistaken for the “Bay of Storms” – or maybe the men merely wanted to explore this spectacular area with the towering mountains on one side, and a possible route to the unknown interior right in front of them.

The name goes back to a loan farm – Vlootjesbaai, given in 1714 to David du Buisson.    David arrived from France around 1702/1703 and rented the property from the VOC company.   They paid high prices for their farms with the expectations that they could make a good living but they were disadvantaged by farmers.

During May 1717, Du Buisson was attacked in his house by fugitive slaves and barely escaped with his wife and children after receiving sever wounds.   Food and ammunition were plundered from the house.

The 1950 photo in the article showing the Morkel farms bought and the Strand was built on Mostertbaai Strand (Vlooibaai).

In the early 1700’s a Huguenot was granted a farm there known as “Vlooibaai” – today this farm forms the business centre of the Strand. Numerous name changes followed, but in 1937 it was eventually decided to call it the Strand, the name it still carries today. Today the town is a popular seaside resort. The climate is dry and sunny in the summer, and usually fairly mild in the winter.

The Strand has been sought-after since the mid-1800s, when it was the traditional summer holiday resort for farmers from the Stellenbosch area. Situated on the northeastern shore of False Bay, the 5 kilometre-long expanse of white sandy beach offers safe swimming, making it popular with families, sunbathers and surfers.

In Strand, you will find the the green-domed kramat of Sheik Yusuf, resting on a sand dune near Macassar. It is one the most important shrines for the Western Cape’s Muslim people. Back in the 19th century, Muslim people had to practise their faith in secret and the exiled Sheik Yusuf, the father of Islam in South Africa, is one of the men who brought the religion to the Cape Colony.

The Pringle Bay and Rooi Els area has a rich heritage dating back to the Stone Age. The mountains and coastline have been inhabited by nomadic tribes for thousands of years. However, the actual villages were only founded in the 1930s when the land was purchased by three businessmen hoping to turn the area between the Rooi Els River and Palmiet River into beach estates.

The name Pringle Bay was actually originally given to the stretch of land between where the two villages of Rooi Els and Pringle Bay now lie. This was back in the late 1700s and the name came from the Royal Naval Commander-in-Chief, Sir Thomas Pringle. He was in charge of the Simons Town Naval Base from 1796-1798. When the bay was named in the late 1700s, the plan was to turn the area into a port to ship farm produce across False Bay to the naval base and surrounding town. However, this never actually happened, which allowed Pringle Bay to remain a quiet area that is now a wonderful retreat from city life.

Somerset West was founded in 1822 on part of the historic farm, Vergelegen, which consists of a large estate and an 18th century farmhouse which was built in the historic Cape Dutch style by Willem Adriaan van der Stel.

At the start of the Great Trek in 1835 when migrants decided to leave the Cape Colony as it was then known, the first mountain range they crossed was Hottentots Holland. Cuts and wheel markings from their ox wagons can still be seen in rock formations in the vicinity of Sir Lowry’s Pass on this mountain range.

The Strand in Western Cape

Strand is a seaside resort town in the Western Cape, South Africa. It forms part of the Helderberg region of the City of Cape Town Metropolitan Municipality, situated on the north-eastern edge of False Bay and near the foot of the Helderberg Mountains. Its geographical position is between Somerset West and Gordon’s Bay, and is about 50 km southeast of Cape Town City Bowl. Strand is in the Western Cape province of South Africa, and has a population of approximately 50,000. Strand’s main attraction is the beach; 5 km of white sandy beach off False Bay.

Cape of Storms – video and damage