WATCH: Marelize who? Viral video of Cape storm will have you going ‘Ooh v*k!’
Everyone loves a good viral video, and the two cold fronts that hit Cape Town this week have now delivered exactly that.  Residents were warned on Monday that the two cold fronts hitting the province and that severe weather would impact the Cape Peninsula in the coming days.

The SA Weather Service advised of strong winds and heavy rainfall over Cape Town and surrounds, setting in on Monday, lasting until early Wednesday. The weather service has also advised on possible mudslides.

Capetonians have certainly felt the weather’s impact with many on Tuesday already were feeling ready to cancel the day and stay indoors.

The wet and windy conditions resulted in numerous instances of flooding in informal settlements and numerous vehicle incidents.

On Monday, Charlotte Powell, head of Public Awareness and Preparedness, Disaster Risk Management Centre had “urged residents to please ensure that there are no loose items laying around their properties that could cause any damage, to check for overhanging tree branches etc. and to ensure that gutters and drains are cleared of debris.”

However, it appears that one particular family missed the warning, not only did their roof go flying off their building but so too did their furniture.

The viral clip shows a family running towards the window of their home where they then notice that their roof is gone.

“Jesus please protect my family. A storm just hit our house. I am not even there … ”

These were the words of Afrikaans singer Louis Geldenhuys after seeing video footage of his home being pummelled by a cold front in Cape Town.

The city was lashed by heavy rain and buffeted by fierce gusts of wind – knocking out power temporarily in some areas, uprooting trees and causing flood damage to at least 3,000 homes and roads across the metro on Tuesday.

The singer, who was on tour in Pretoria promoting an album and music video, took to Facebook and said: “Jesus please protect my family. A storm just hit our house. I am not even there … ”

His family was at home when the storm hit, tearing out glass windows in an outdoor area and blowing away outside furniture.

“Louis, our entire f****n roof is gone,” a woman is heard saying in a version of the clip with audio.

A second woman is heard saying: “Oh donner the roof blew away. Oh f**k there goes the windows, oh there goes the benches. You can’t go outside, you will be blown away.” 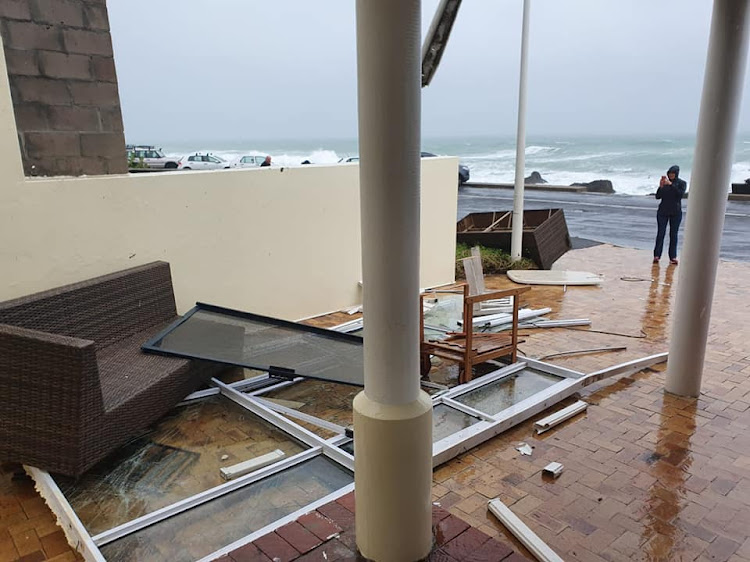 Disaster risk management spokesperson for the city, Charlotte Powell, said there had been flooding at informal settlements in Masiphumelele in Fish Hoek, Imizamo Yethu in Hout Bay and Makhaza in Khayelitsha, affecting about 3,000 dwellings on Tuesday.