Militants linked to the Islamic State group have seized a heavily-defended port in Mozambique after days of fighting, according to reports.    Local media say government forces that were in the far northern town of Mocimboa da Praia fled, many by boat, after Islamists stormed the port.   The town is near the site of natural gas projects worth $60bn (£46bn).    In recent months militants have taken a number of northern towns, displacing tens of thousands of people. 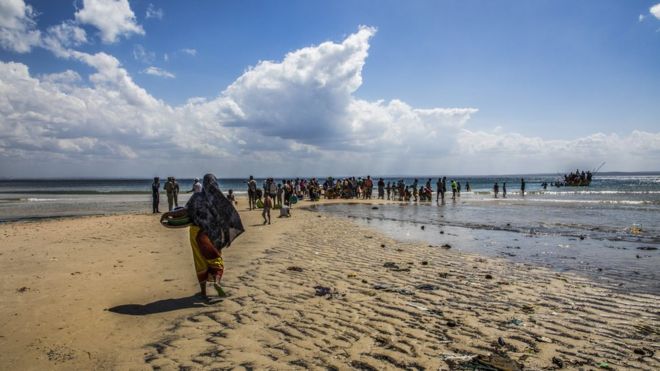 WARNING TO SOUTH AFRICA NOT TO GET INVOLVED OR INTERFERE

ISIS has warned South Africa that it would “open the fighting front” within South Africa’s borders, should it get involved in Mozambique’s Cabo Delgado province.

An organisation linked to ISIS, Ahlu Sunnah Wal Jamaah, has been waging a violent insurgency in Mozambique’s northernmost province, Cabo Delgado.     “Defence Intelligence can confirm that there is an increase of Islamic insurgency activities currently in the province of Cabo Delgado, Mozambique, and these have the potential to spread to other provinces and neighbouring Southern African Development Community states,” read Mapisa-Nqakula’s answer.

More than 90 well-trained Isis fighters have infiltrated northern Mozambique in the past 30 days, and made their way down to the port of Nacala. April 13, 2018 MBOMBELA – It is believed that the group headed to Nacala to bolster the Isis stronghold at the port where containers laden with drugs are offloaded monthly from cargo ships.

This was also one of several attacks on Mocimboa da Praia this year, as Islamic State-linked militants have stepped up attacks in the region.  The port is used for cargo deliveries to the oil projects about 60km (37 miles) away, which are being developed by oil giants including Total.
>

Insurgents affiliated to Islamic State once again took control of the strategic port town of Mocimboa da Praia in northern Mozambique after heavy fighting this week, inflicting heavy casualties and forcing Mozambique government troops to flee the town by boat.

At least 55 government army recruits were reported killed over the past few days in the running battles culminating in the fall of the port in Cabo Delgado province, security sources said. The main reason for the insurgent victory was that government forces had been cut off and had run out of ammunition.

Sources said the South African private military company Dyck Advisory Group (DAG) which has been providing air support to the Mozambique army for several months, had been unable to resupply them with enough ammunition as its helicopters had had to fly too far to refuel.

Five insurgents dressed in uniforms similar to those worn by the Mozambican military had killed five civilians and razed seven houses in an attack on Litamanda village, Macomia district on 8 August.

“Other sources reported a funeral procession being attacked, resulting in an unknown number of kidnappings,” the journal said.

“By 8 August, security analyst Johann Smith was calling the fighting in Mocimboa da Praia ‘intense’ and reporting that insurgents were targeting Chinese-owned businesses — and sawmills in particular — in their attacks.

The journal said it had just heard of an earlier incident, from the week of 13 July, in which Mozambican security forces surprised six insurgents who were picking oranges at a grove in Ntessa, Quissanga district.

This is a heavy blow for Mozambique’s security forces. Low on ammunition, and facing a large, well-coordinated rebel attack, government troops are reported to have abandoned the port city of Mocimboa da Praia, with many soldiers fleeing by boat.

The question now is whether the rebels will – as they have hinted – try to hold on to this strategic city. That would mark a new escalation in a shadowy conflict that represents a major threat to Mozambique and to international plans to develop vast off-shore gas fields.

The rebels have formal ties to IS, but are also feeding on local grievances in a long-neglected corner of the country.

Mozambique’s neighbours are watching with growing anxiety. A private security contractor based in South Africa is supplying helicopter support to the army. But this latest attack appears to show the rebellion is still gaining in strength and sophistication.
>

Attacks began in 2017 in the northern province of Cabo Delgado, but escalated this year after the group responsible, Ahlu Sunnah Wa-Jama, pledged allegiance to IS.

Earlier this week IS claimed, though its own media channels, that it had taken over two military bases near Mocimboa da Praia, killed Mozambique soldiers and captured weaponry, including machine guns and rocket-propelled grenades.

Tanzania has said it is launching an offensive against the jihadists in forests on the border with Mozambique.

2018 – MBOMBELA – It is believed that the group headed to Nacala to bolster the Isis stronghold at the port where containers laden with drugs are offloaded monthly from cargo ships.

According to well-placed intelligence sources, the infiltrators entered from the island of Zanzibar and used Tanzania as springboard to cross the border into Mozambique. There have been numerous prior infiltrations, but this was the largest single group that came into the neighbouring state, the sources indicated./

“The Isis fighters protecting the drug shipments get a cut to fund their extremist activities,” he added.
This latest incursion happened hardly six months after a heavily armed group of militant Islamists attacked three police stations in the early hours of October 5 in Mocimboa da Praia, a small town in Cabo Delgado Province, 590 kilometres north of Nacala. Two policemen were killed, firearms and ammunition were looted and the town occupied. The locals referred to these men as the “Al Shabaabs”.

The Mozambican military acted swiftly and after a prolonged battle, 16 militants were dead. Two policemen and a local resident were also killed. Despite assurances from the Mozambican authorities that they had the situation under control, several more skirmishes occurred since January.

According to an article, “The emergence of violent extremism in northern Mozambique”, published by the Africa Center for Strategic Studies last month, the national police arrested 24 men on a bus en route from Nacala in Nampula Province. They were suspected of heading to Cabo Delgado Province to join the militants.

According to the research paper, authored by Greg Pirio and Robert Pittelli, the president and associate of the American-based Empowering Communications, and Yussuf Adam, an associate professor of contemporary history at the University of Eduardo Mondlane in Maputo, one of the leaders is a Gambian named Musa. The other, a Mozambican, goes by the name Nuro Adremane.

“The latter reportedly received a scholarship to train in Somalia, travelling by road through Tanzania and Kenya to reach Somalia, as did a number of other members of the group. The Gambian leader actively sought out recruits among segments of the population with grievances against both the security forces of an international mining company and the national police, they wrote.

A former ANC counter-intelligence operative approached the Gauteng government last year with explosive allegations that schoolchildren are being recruited by Islamic radicals for paramilitary training in Pakistan.

In South Africa the organisation established a madrassa in Lenasia, Johannesburg, and converted it into a religious school to recruit black children to be taught to become Muslims. They teach the children in Urdu and when they reach the age of 15 or 16 years they send them to Pakistan for paramilitary training, he said.

Once back in South Africa, the trained children target other children to join and fight against other religions with the pure objective of creating the climate for the establishment of Sharia law in particular areas of the country.

Certain Pakistanis and Bangladeshis running spaza shops and other small businesses in the townships and rural areas have to donate an amount of their earnings to the jihadi cause and there are representatives of Sipah-e-Sahaba that go around on a monthly basis and collect these “donations”.

The takings are transported to Fordsburg in Johannesburg where the South African currency is exchanged for US dollars and laundered through the neighbouring states to Dubai and from there to Pakistan.

Another goal of the syndicate’s members is to infiltrate government departments, Naraine explained.

They are met at Lahore International Airport in Pakistan, flown to Dubai and from there to Tanzania.

From there the illegals are transported by road through northern Mozambique all the way down to an area near Komatipoort from where they are assisted in infiltrating into South Africa.

“At Komatipoort they are kept overnight at safe houses until transport is arranged, ferrying them to Kempton Park.

“Then on to Fordsburg from where the newcomers are dispersed all over the country and merely disappear into the woodwork,” Naraine said.

Terrorist activities in South Africa
• Fund-raising
• Bank fraud
• Money laundering
• Hijacking trucks especially those transporting food and electronic goods – using Zimbabweans and Mozambique criminals
• Human trafficking and human smuggling using closed “bread-transportation vehicles”
• Recruiting and converting children to Islam and then when they reach the age of 16 they are sent to Pakistan to receive military training
• Coordinating fund-raising for Kashmiri groups
• Coordinating fund-raising for Pakistan South Africa Associations
• Infiltrating and coordinating the Muslim community in South Africa who are the prime funders outside of their criminal activities.