The Battle of Verdun, 21 February to 15 December 1916, became the longest battle in modern history. It was originally planned by the German Chief of General Staff, Erich von Falkenhayn to secure victory for Germany on the Western Front. The aim was to crush the French army before the Allies grew in strength through the full deployment of British forces. Without France’s ninety-six divisions the Allies would be unable to continue fighting in the west.  At 4 am on 21 February 1916 the battle began, with a massive artillery bombardment and a steady advance by troops of the German Fifth Army under Crown Prince Wilhelm. 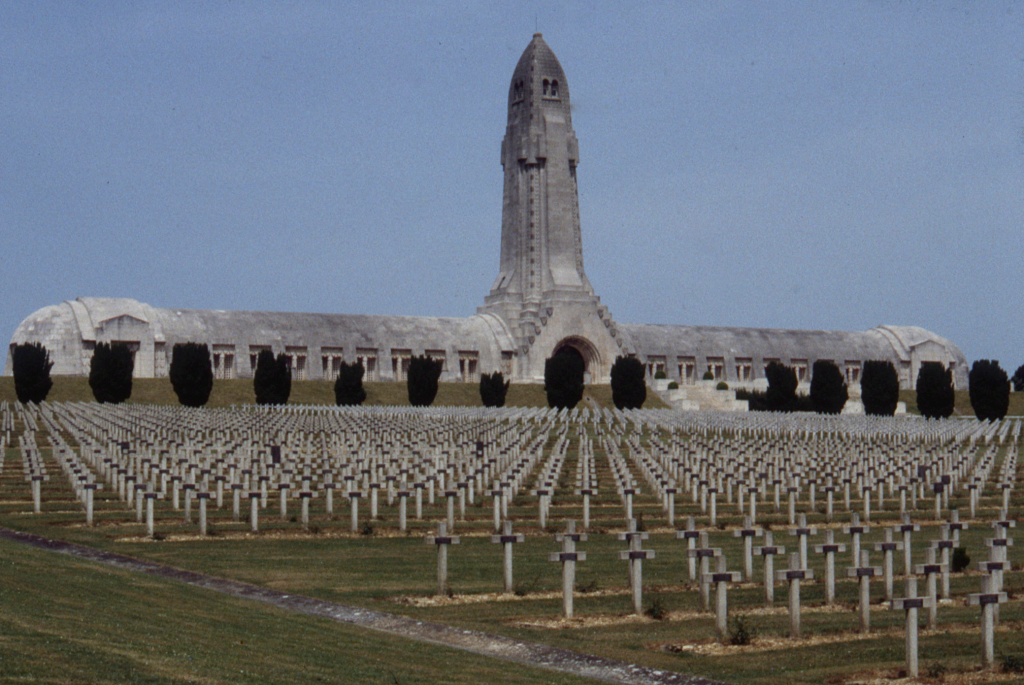 The eastern French city of Verdun is a place of memory which symbolises the terrible human cost of World War I. Hundreds of thousands of French and German soldiers died there during 300 days of bitter combat in 1916. Every year, soldiers’ bones and belongings are discovered around the city and carefully catalogued. To date, around 60,000 soldiers have still not been buried.

Battle of Verdun – World War I

This World War I siege stemmed from German General Erich von Falkenhayn’s edict to elicit major bloodshed from the French defense of the fortress complex around Verdun. German forces advanced quickly in February 1916, claiming Fort Douaumont and Fort Vaux after brutal subterranean melees. Despite coming within two miles of Verdun cathedral, the Germans called off their offensive in mid-July, and Falkenhayn was relieved of his position. The French retook their forts and pushed back the line, and by the time their forces ground to a halt in December, both sides were left with more than 600,000 casualties.

On 21 February 1916, more than 1,220 guns around an eight-mile perimeter opened fire. It was the sort of drenching shell storm that would distinguish the battle. Verdun did act as a “suction cup”: three fourths of the French Western Front divisions would eventually serve there. But even from the start, the “Meuse Mill” did not achieve the five-to-two kill ratio Falkenhayn had predicted. The attackers soon forgot this object.

Orders went out to take French positions “without regard to casualties.” At the end of the first week, the Germans had advanced six miles; a few men walked into an almost undefended Fort Douaumont and took possession. For the French, that marked the low point. Fighting degenerated into isolated struggles for shellholes, forcing the French into an impromptu but successful defense-in-depth. At the beginning of June, the Germans took another key stronghold, Fort Vaux, after hideous subterranean melees. A few of their troops actually reached a point from which the twin towers of Verdun cathedral were visible, two miles away. Then, on 14 July, the Germans called off their offensive. Falkenhayn was dismissed shortly after, largely for his failure at Verdun.

In the autumn the French retook Douaumont and then Vaux. By the time their advance ground to a halt in mid-December, they were close to the line where the battle had started ten months earlier. Casualties for both sides totaled between 600,000 and 700,000 and were roughly equal. (The total casualty figure for the entire war in the Verdun sector approaches 1.25 million.) Even today the skeletons of Verdun still surface, to be added to the towering bone piles in the basement of the Douaumont ossuary.

In December 1915, Allied commanders had met to discuss strategies for the upcoming year and agreed to launch a joint French and British attack in the region of the River Somme in the summer of 1916. Intense German pressure on the French at Verdun throughout 1916 made action on the Somme increasingly urgent and meant the British would take on the main role in the offensive.

Over the next 141 days, the British advanced a maximum of seven miles. More than one million men from all sides were killed, wounded or captured. British casualties on the first day – numbering over 57,000, of which 19,240 were killed – make it the bloodiest day in British military history.

An official documentary film, The Battle of the Somme.   https://www.youtube.com/watch?v=cyJKJdeHv9o

SOLDIERS FROM EMPIRE AND COMMONWEALTH

Soldiers from the Empire and Commonwealth made a significant contribution to the Somme offensive. On 1 July 1916 a battalion from Newfoundland, attacked with the 29th Division, while the 1st Battalion, The Lincolnshire Regiment included a contingent from the Bermuda Volunteer Rifle Corps. Soldiers of the British West Indies Regiment were not given the opportunity to fight as equals alongside white soldiers. Instead, the War Office largely limited their participation to ‘labour’ duties, but the use of BWIR soldiers in supporting roles intensified during the Battle of the Somme as casualties among fighting troops meant that reinforcements were needed in the front line.

A division of Indian cavalry and a South African brigade were among the reserve forces of Fourth Army ready to help exploit any breakthrough on the first day.

Both went into action on 14 July 1916. They were joined by Australians, New Zealanders and Canadians, and all took part in the fierce attritional fighting that characterised the Somme.

After a period of recovery near Vimy Ridge, the 9th Division returned to the Somme in October and the South Africans were again involved in an attack towards the Butte de Warlencourt. When they were finally withdrawn on 20 October, the South Africans had suffered further losses of around 1,150.

On 6 March, the Germans renewed their offensive, this time on the west bank of the Meuse. The already terrible battlefield conditions were made worse throughout March and April, as persistent rain turned the area into a quagmire.

In late April, General Robert Nivelle took over French command from Petain and began large-scale counter attacks. This offered the Germans a chance to return to Falkenhayn’s strategy but by this time all sense of the original concept was lost, replaced by a fixation to take Verdun. In early June the Germans took Fort Vaux after very tough fighting. This proved to be their final success. Efforts to continue the advance later that month failed, despite the use of phosgene gas.

Phosgene is very poisonous and was used as a chemical weapon during World War I, where it was responsible for 85,000 deaths.
https://en.wikipedia.org/wiki/Phosgene 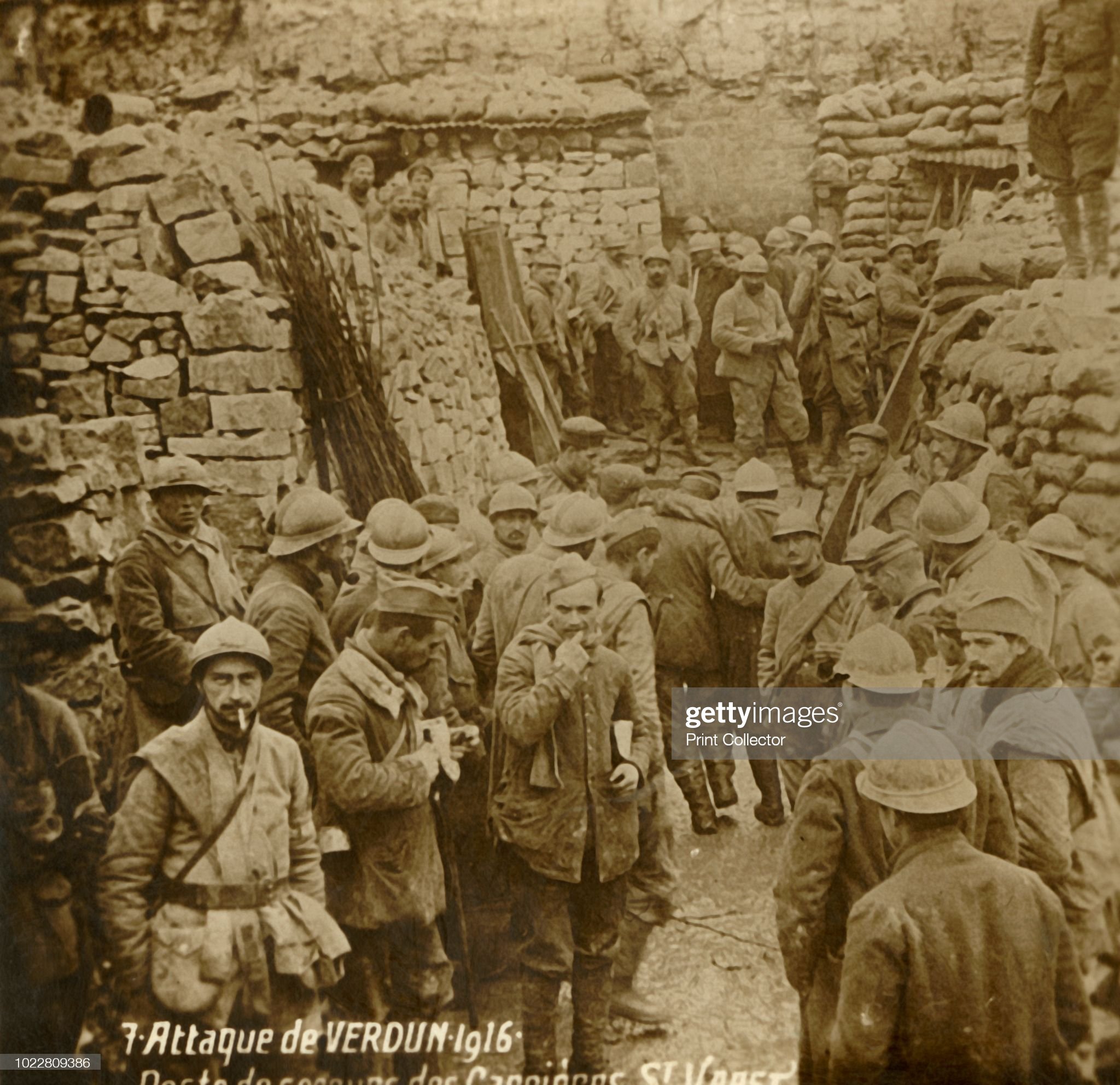 During the 300 days of the Battle of Verdun (21 February 1916–19 December 1916) approximately 230,000 men died out of a total of 700,000 casualties (dead, wounded and missing). The battle became known in German as Die Hölle von Verdun, or in French as L’Enfer de Verdun, and was conducted on a battlefield covering less than twenty square kilometers. 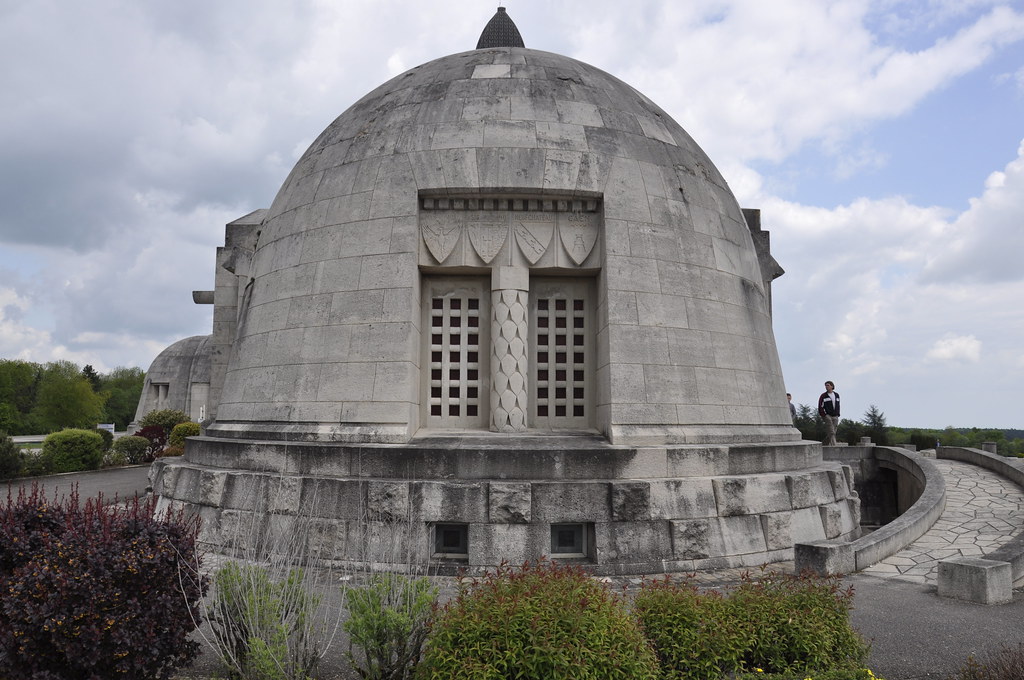 This unprecedented and disconcerting structure contains the bones of some 130,000 unidentified men – inevitably German as well as French – who died in the struggle for Verdun. The project was promoted by a committee convened by the Bishop of Verdun and was sponsored by non-governmental bodies and veterans’ associations. 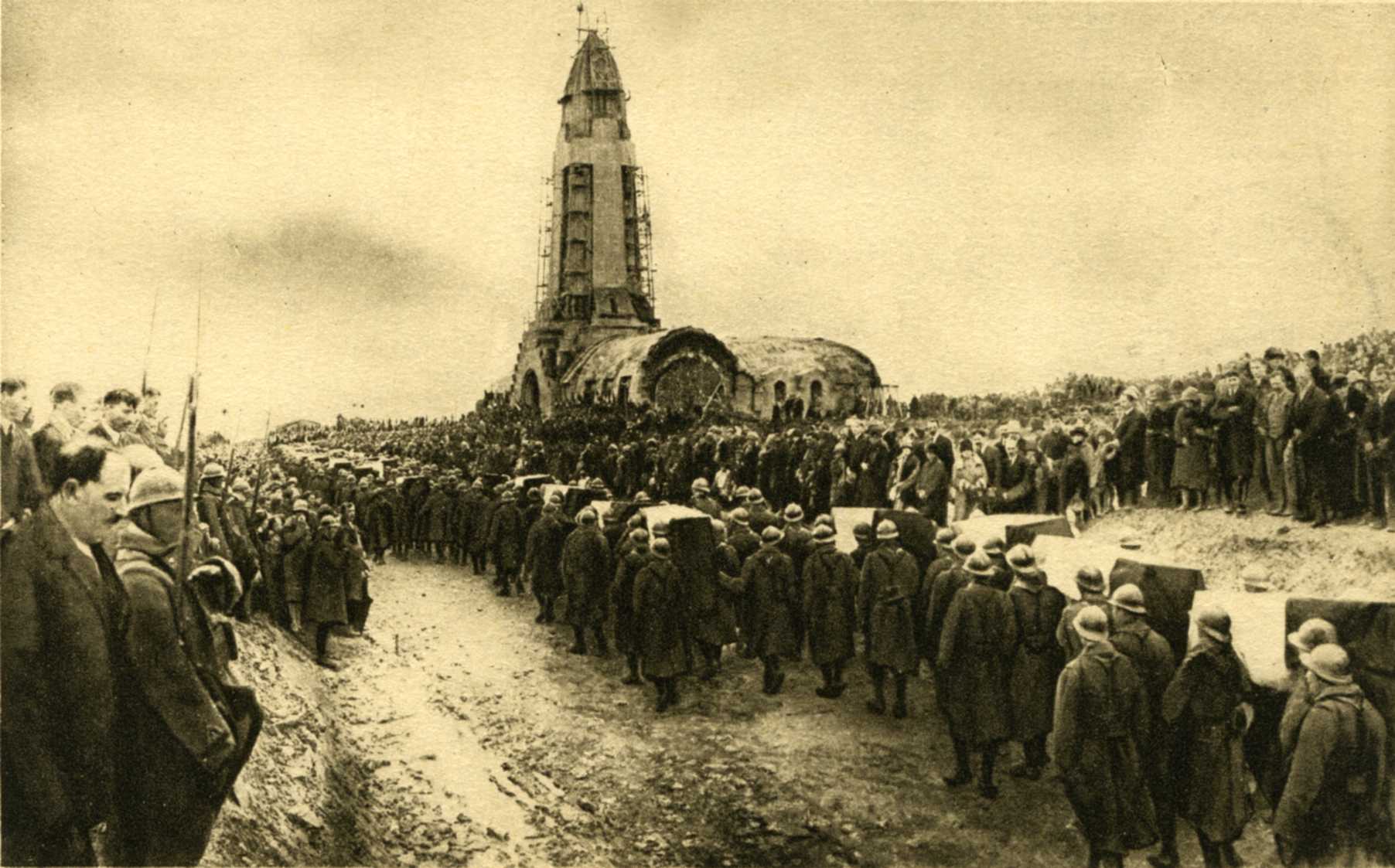 Battles of Verdun, Somme and the Hindenburg Line

The Hindenburg Line (German: Siegfriedstellung, Siegfried Position) was a German defensive position built during the winter of 1916–1917 on the Western Front during the First World War. The line ran from Arras to Laffaux, near Soissons on the Aisne.

The effectiveness of the German system was demonstrated in tragic fashion during the British offensive on the Somme when, in July 1916, German soldiers survived a massive week-long preliminary bombardment unscathed. As the British infantry began to cross the no man’s land, the German soldiers left their well-protected deep bunkers and manned their gun emplacements: 20,000 men were killed in one day while another 40,000 were either wounded or reported lost.

Drawing the obvious conclusions from the failed Allied offensive during the last Battle of the Somme, the German General Staff took the decision to build a new line of defence which was to be the supreme achievement in German military construction on the Western Front. The Siegfriedstellung, familiar to the Allies as the Hindenburg Line, was established far behind the existing front line (between ten and fifty kilometres). Structurally, it was a series of fortified zones linked together by defensive works which stretched from the North Sea to the town of Verdun.

The Hindenburg Line comprised five operational zones, or Stellungen, which were named after figures of German mythology (from north to south): Wotan, Siegfried, Alberich, Brunhild, and Kriemhild. The most powerful of these sections was Siegfried which stretched 160 kilometres from Lens to Reims. It was built in just five months thanks to a massive workforce of more than 500,000 labourers including German civilians and Russian prisoners of war. The defensive works comprised deep trenches (5 m deep, 4 m wide) and dugouts with bands of barbed wire entanglements at least twenty metres wide in front of the front line. The pillboxes and shelters were protected by reinforced concrete and sheets of steel. In addition, a line of more lightly defended outposts were built about three kilometres in front of the main line to slow down any Allied attack. The battle zone proper, which was about two kilometres deep, was covered by a massive bank of big guns and machine-guns perfectly positioned to eliminate any advancing infantry. As the war progressed a series of anti-tank ditches were also dug in front of the front lines.

Today is the 96th Anniversary of the Battle of Arras, the first British offensive against the Hindenburg Line and something of a forgotten battle. It was very much a British and Commonwealth battle, with Canadians attacking to the North at Vimy Ridge, New Zealand tunnellers working beneath Arras and Australians on the flank at Bullecourt.

Amongst the British divisions were all three Scottish formations: 9th (Scottish), 15th (Scottish) and 51st (Highland), so like Loos in 1915 it was also something of a ‘Scottish battle’ too.

Arras turned into a bloody struggle, despite early success on this day in 1917 but aside from the success of the Canadians at Vimy and the terrible loss of Australians at Bullecourt – often wrongly seen as separate battles by some – it is little remembered and aside from books like my Walking Arras, Jeremy Banning & Peter Barton’s Arras 1917 and Jon Nicholl’s Cheerful Sacrifice it has rarely attracted the attention of Great War historians in print. As we move towards the WW1 centenary, hopefully that will change.

This image shows a German MG08 on the lip of a sunken lane somewhere near the St Quentin canal area in October 1918. This was the standard heavy machine-gun of the German Army in the Great War capable of firing 400 rounds a minute. An ammunition tin is seen on the far left and next to it nearer the gun is the condenser tin; this was connected to the gun by a leather hose and condensed the steam in the guns water-cooling jacket back into the tin where it could be used to refill the jacket for the next shoot. The positioning of the gun suggests a good field of fire beyond the lane, but it’s less than permanent position is also typical of German defences in the last phase of the war as the Germans were being defeated and thrown back, and could not rely on the sort of entrenchments they had prepared earlier in the war.