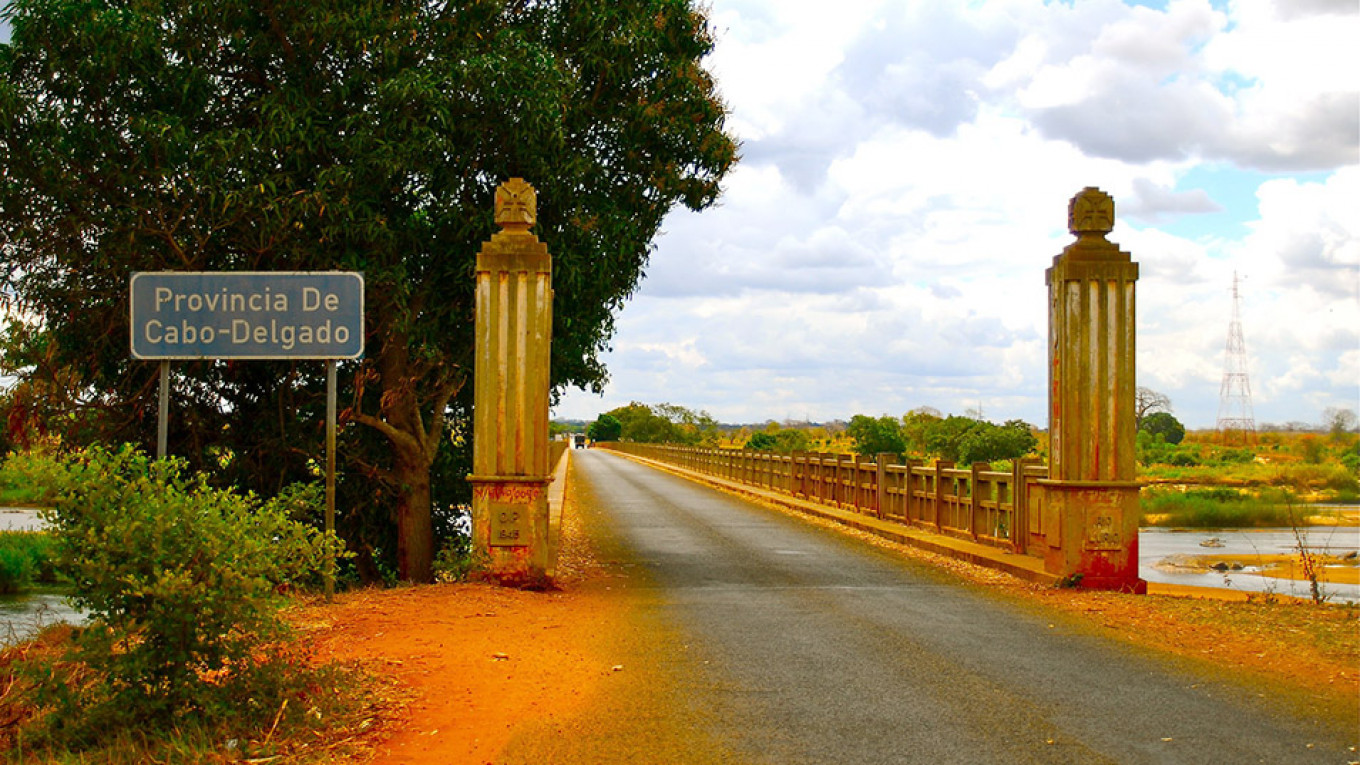 They were recently in South Africa as well.

A deployment of Russian guns-for-hire, with links to the Kremlin, has sustained casualties in its fight against Islamist militants in Mozambique, multiple sources have told CNN.

In another example of Russia’s growing reach into Africa, dozens of private military contractors are aiding the Mozambique army which is battling an insurgency in its northernmost province.
The mercenaries in this resource-rich southern African country appear associated with Yevgeny Prigozhin, a St. Petersburg oligarch so close to the Kremlin that he is known as President Vladimir Putin’s “chef.”
Prigozhin, whose reach in the region stretches into Sudan, Libya and the Central African Republic, is thought to be the financier of the Wagner group, hundreds of whose fighters have also been deployed into Syria. His companies have been previously sanctioned by the US Treasury Department for their actions in Syria and his financing of the Internet Research Agency, which was responsible for Russian attempts to interfere in the 2016 US elections.
Prigozhin has routinely denied any connection to Wagner.
The fast-expanding insurgency in Mozambique threatens to disrupt crucial foreign investment in the country’s natural gas reserves, believed to be worth billions of dollars.
Multiple sources have told CNN that the Russian intervention has not begun well. Two contractors, ages 28 and 31, have been killed during clashes with the insurgents, the sources say. And there are unconfirmed reports of additional casualties.
Yevgeny Shabayev, who acts as an unofficial spokesman for Wagner fighters, told CNN that the bodies of the two men had already been returned from Mozambique to their home region of Vladimir, east of Moscow.
The role the mercenaries are playing in the country — combat or advisory — is still unclear. CNN has obtained photographs showing Russian fighters and equipment in the port city of Pemba. Mozambican sources told CNN the mercenaries are also based further north in the coastal town of Mocimboa da Praia and have been involved in several operations along the northern border with Tanzania, where the Islamist insurgency is growing in strength.
Sources in the country also told CNN that the Russians are poorly equipped for combat in the dense bush and that the relationship between the mercenaries and Mozambique army is strained.
One Mozambican soldier told a producer working with CNN that the Russians “are doing nothing in terms of reducing the impact of the attacks” and that Mozambican troops had refused to take part in some operations.
Dmitry Peskov, Russian President Vladimir Putin’s spokesman, told reporters in early October that “as far as Mozambique is concerned, there are no Russian soldiers there.”
The deployment of Russian contractors in September followed a visit by President Filipe Nyusi in Moscow a month earlier, the first visit by a Mozambican head of state in two decades.

During the visit, Presidents Putin and Nyusi signed agreements on mineral resources, energy, defense and security.

Shortly after the trip, 160 guns-for-hire arrived in Mozambique, according to an eyewitness. They arrived on September 13 in a giant Russian Antonov An-124 plane, according to flight data.

Twelve days later, a second Antonov An-124 touched down at Nacala Airport carrying military equipment, including an Mi-17 attack helicopter.

At least one of the An-124s that flew into Mozambique belonged to the 224th Flight Unit of the Russian air force. The Russian Defense Ministry previously signed a contract, details of which were seen by CNN, with a Prigozhin company for the use of transport aircraft of a similar air force unit, the 223rd Flight. Between August 2018 and February 2019, two planes of the 223rd Flight made at least nine flights to Khartoum, as Russia carried out an ultimately unsuccessful plan to keep deposed Sudanese President Omar al-Bashir in power.
Russia sees big opportunities across Africa as the US military presence there is scaled back and as cash-strapped governments seek security assistance. Moscow has signed more than 20 defense agreements with African governments, and last month Putin welcomed 43 heads of state or government from Africa to a summit in the Black Sea resort of Sochi.
In return, the Kremlin gains strategic influence and preferential access to the continent’s vast natural wealth, from gas to gold./
This image, shared widely on social media and verified by a CNN source, appears to show an Mi-17 transport helicopter, part of the military hardware delivery at Nacala in September. 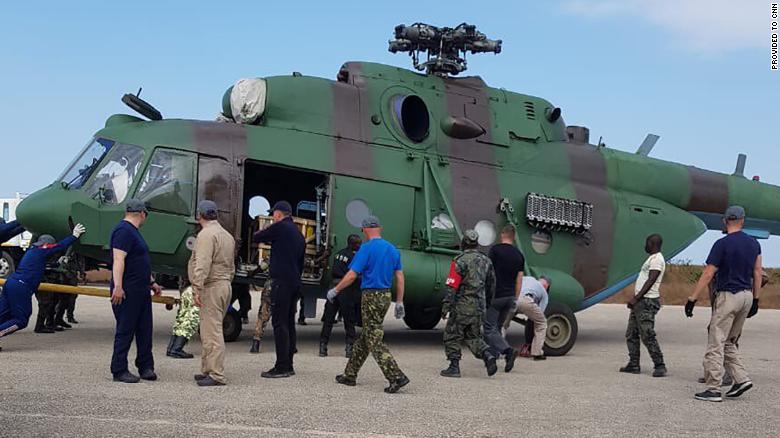 When John Gartner, a former Rhodesian soldier who now heads the military security company OAM, was approached by a Mozambican official to help fight the Islamist insurgency in the country’s north, he thought he was about to win a lucrative contract.   “We presented them with a first-class proposal in early August. We have so much experience in operating in Mozambique and know the tough environment very well. Trust me, we would have done an excellent job,” he told The Moscow Times.

Dolf Dorfling, an ex-colonel in the South African army and founder of the Black Hawk private military contractor, likewise submitted a “strong” proposal for a country he knows “like the palm of his hand.”    They both lost out to a new player in town — the Kremlin-linked Wagner Group, believed to be owned by Yevgeny Prigozhin, a businessman with close links to Russian President Vladimir Putin often referred to as “Putin’s Chef” because of his catering business.

While the veteran mercenaries admitted they couldn’t match Wagner’s low costs and high-level political connections, they cast doubt on the Russian company’s ability to operate in Mozambique because they say it knows neither the terrain nor the politics.

“Look, it’s money and politics, it was clear we couldn’t compete with Wagner,” said Gartner, “But now they are in trouble there, they are out of their depth.”

In September, about 200 Russian Wagner mercenaries arrived in Mozambique’s capital Maputo, news first reported by The Times of London and independently confirmed by The Moscow Times.

Since arriving, they have been engaged in a fierce fight with an Islamic State-linked insurgency in the country’s gas-rich, Muslim-majority Cabo Delgado region, which has claimed over 200 deaths since 2017.

Black Hawk and OAM are two of the many private military contractors operating in Sub-Saharan Africa. Their rise has been linked to the end of apartheid in South Africa, which released many skilled soldiers eager to be paid to help African governments struggling to curtail internal rebellions. Many are now aged between 55 and 65, but say they have the knowledge and experience to keep working in Africa.

Gartner said he had proposed to bring around 50 highly qualified experts to Mozambique at a cost of between $15,000 and $25,000 per person per month.

While no public information is available on how much Wagner pays its mercenaries, Yevgeny Shabayev, a former Russian military officer and self-appointed spokesman for the group, told The Moscow Times that on average, a lower-rank Wagner soldier receives between 120,000 and 300,000 rubles per month ($1,800 – $4,700).

Prigozhin is emerging as a key figure in Russia’s increasingly expansive foreign policy in Africa, and Wagner troops have been reported operating in Sudan, the Central African Republic and Libya.

Last week, The New York Times reported that following a meeting in Moscow between Putin, Prigozhin and Madagascar’s then-president Hery Rajaonarimampianina, Russian operatives were sent to the country with the aim of influencing the local elections. Their security was reportedly provided by mercenaries from Wagner.

Mark Galeotti, an expert on Russian security affairs, says that Wagner’s unique blend of proximity to the Kremlin and low costs make it attractive.

“They are cheap and come as part of a package of regime-support services, including political technologies.”

Mozambican President Filipe Nyusi flew to Russia and met Putin at the end of August — two months before the country’s October presidential elections — where he signed a number of energy and security agreements.

While there is no evidence to suggest Russia sent operatives to influence the Mozambican elections, companies linked to Prigozhin have been accused of propping up Nyusi and his party.

In the run-up to the elections, a think tank called Afric conducted a poll that predicted victory for Nyusi. As the publication of election polls is illegal during the campaign period in Mozambique, its founder Jose Matemulane published it on the International Anticrisis Center website, a Russian NGO linked to Prigozhin. The poll ended up being widely shared across social media in Mozambique.

Afric’s page was eventually suspended by Facebook at the end of October after Nathaniel Gleicher, Facebook’s head of cybersecurity policy, said the entity was associated with Prigozhin and had attempted to interfere in the domestic politics of African countries.

In over their heads

A few weeks after Wagner’s arrival in September, reports started coming out of Mozambique that the group’s mercenaries were being ambushed, killed and beheaded in Cabo Delgado.

“You have to realize this is one of the toughest environments in the world,” said Al Venter, a veteran South Africa journalist who has written extensively about mercenaries on the continent.

“The consensus is that Wagner has almost no experience of the kind of primitive bush warfare being waged in there. They are going to come very badly unstuck,” he added.

Cabo Delgado is one of the poorest and least developed areas in the region. It has limited basic infrastructure, including a lack of roads and hospitals, that makes it an environment that is “ideal” for ambushes, according to a Mozambican intelligence specialist based in the area who wished to remain anonymous.

“The undergrowth is so thick there that all the high-tech equipment Wagner brought ceases to be effective. The Russians arrived with drones, but they can’t actually use them,” the specialist said.

The environment is not the only problem Wagner faces.

Two sources in the Mozambique military, also speaking under condition of anonymity, described growing tensions between Wagner and the Mozambique Defense Armed Forces (FADM) after a number of failed military operations.

“We have almost stopped patrolling together,” one of the two soldiers said.

Jasmine Opperman, a terrorism expert based in South Africa, believes “a perfect storm” has formed around Wagner in Mozambique.

“The Russians don’t understand the local culture, don’t trust the soldiers and have to fight in horrible conditions against an enemy that is gaining more and more momentum. They are in over their heads.”

Wagner’s problems in Mozambique raise bigger questions about the company’s rapid growth, according to Galeotti.

“They have clearly had to expand since their early Syrian days and also have to make a profit. This means being less picky with recruits. They are increasingly operating in theaters where they don’t have much expertise.”

Shabayev, who says he is in regular contact with Wagner soldiers, echoed these sentiments. He expects the death toll for Wagner soldiers to rise across the world in coming years, but said it will be hard to glean concrete information given Wagner’s secrecy.

He said the first bodies of Wagner soldiers who died in Mozambique have already arrived in Vladimir, a region outside Moscow, where families have been given hefty compensation in return for silence.

The Moscow Times was unable to independently confirm this.

For now, Gartner and Dorfling are on standby, monitoring developments in Mozambique closely.

“Once Mozambique realizes that Wagner won’t be able to do the job alone, we will be back in demand,” said Dorfling.

Sources told them that Wagner has started to look around for local military expertise, although they haven’t heard anything yet.

“If you could let Wagner know we are available to help, that would be great. We would like to come in and do what we do best,” said Gartner, before hanging up.

Islamic State is a terrorist organization banned in Russia.