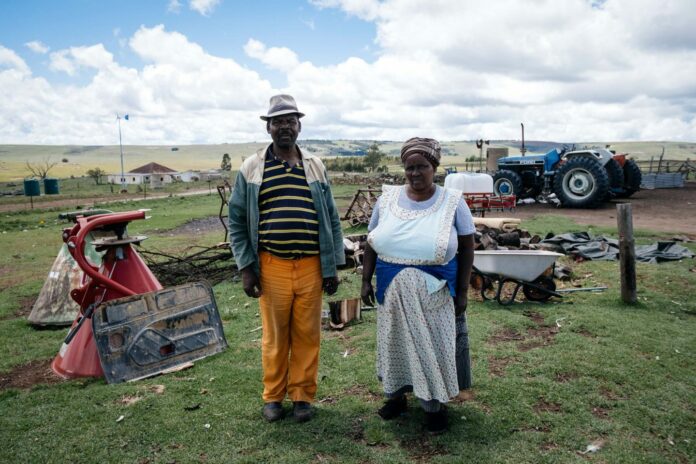 It is time that the government report on all farms and land bought since 1994 with TAX money and who is farming on that land?

Government (ANC and EFF)  are quick to ring the bell on expropriation of land, but what about this land areas and also the old mines that never was rehabilitated at all.   Most of those ugly mines were also productive farm land.

Lulama Kapa, 66, and his wife Nothandekile, 63, are emerging black farmers from the Eastern Cape.   In 1989, when the couple were in their early thirties, they started working for a white commercial farmer on portion 5 of Oribi Dale Farm 360 outside Ugie in the Eastern Cape.    But for the past 10 years, they have been unable to get the government to transfer the lease into their names. Lulama Kapa has kept a file of all the letters he has sent and received from government departments during this time.   It was ongoing for years.

Despite the fact that the Kapas have no formal lease, their farm on the state-owned land is flourishing. They grow mielies and livestock fodder, and own 87 cows and 305 sheep. They have built two small houses on the land and bought a bakkie and two tractors along with a plough, crop sprayer and ploughing tools. The couple is more than willing to lease the land, which would otherwise be lying barren, from the government.

Several years later, Lulama Kapa received a phone call from someone who identified himself only as Mr Nelani from Cape Town. The person said Kapa was squatting on his family’s ancestral land and that the Kapas must vacate the farm immediately.

The Nelani family is well known in the Mthatha area, but this is about 80km away from Farm 360. The mayor of the King Sabata Dalindyebo Local Municipality, which encompasses Mthatha and Mqanduli, is Nyaniso Nelani.

A deeds search shows that Zoyisile William Nelani and Virginia Nobantu Nelani own land in the area, but not Farm 360. They bought portion 0 of Farm 373 in 2001. Zoyisile Nelani was an uMkhonto weSizwe struggle icon in the Eastern Cape who was arrested several times in the 1960s and 1970s before serving five years on Robben Island. He was an ANC councillor for a brief period after apartheid ended, before his death in 2014. The government still owns Farm 360, according to the deeds search.

Kapa spent three years fending off calls from Mr Nelani, who would not supply his first name. But then in 2018, Kapa began receiving letters from Mthatha attorney Mpumelelo Notununu instructing him to vacate the land, even though there had been no application for an eviction order.

“Nelani was farming some other land nearby for some time before making a claim to this farm.” Kapa suspects that after Zoyisile Nelani died, one of the Nelani family members took a liking to Kapa’s farm after seeing how productive it is and decided to grab it.

In 2019, the agriculture department suddenly told Kapa that Farm 360 had been sold and that the new owners had changed the farm’s name to 373. But when the department was shown the deeds search proving that the government still owns Farm 360, and that Nelani owns Farm 373, it changed its story and said the two plots of land had been mixed up and that Kapa was mistakenly farming 373 and not Farm 360.

The farms are completely different sizes, so it is difficult to understand how the government could have gotten them mixed up for 10 years. Zoyisile Nelani also farmed his land nearby from 2001 to 2014 without once mentioning to Kapa or the government anything about a mix-up.

The couple just want to be left alone to farm peacefully. They are good at farming and willing to move if the government offers them the chance to rent a bigger piece of state land on which they can expand their operations. “This farm is small. If there is an option of a bigger, equally fertile farm, I will take it,” said Lulama Kapa.

ANC family tries to run black farmers off their land

In a response to a DA parliamentary question, the Minister of Justice and Correctional Services Ronald Lamola said that “it is the President’s prerogative to release SIU’s final reports” of the 6 cases and more than 260 people it investigated since 2011.

This morning reports emerged that a high-ranking ANC official in the Eastern Cape allegedly gave a wealthy businessman and friend a state farm as a ‘gift’ after the previous farmer was suddenly told he was occupying the land illegally. Vuyani Zigana lost the land near Kokstad where he had been farming since 2012. Due to this injustice he also had to sell most of his cattle to pay for the cost of the sheriff who held them for three months. And he has spent R80 000 pursuing the matter in court, only for officials from the Department of Agriculture, Land Reform and Rural Development (DALRRD) to not show up at the appointed court dates.

This is another indication of how the ANC’s corruption and patronage is impeding land reform in South Africa.

While the Minister of Agriculture, Land Reform and Rural Development, Thoko Didiza, have reportedly implemented an investigation, the DA questions whether those involved will ever be held to account.

Currently, the DA knows of three other cases where severe misconduct, if not outright corruption, have hampered emerging farmers from owning the land they have successfully farmed for years:

Minister Didiza needs to step in immediately. Instead of blindly adopting poor thought-out policies, the Department should endeavor to apply the policies currently in place to ensure that black farmers leasing Government land and making a success of it are supported, not undermined when cadres become envious of their success.

A transparent database should be established where relevant information regarding the leasing of land should be easily accessible by members of the public.

Successful farmers should be given title deeds and not be forced to reapply for a new lease every few years. They cannot be forced to continue with the threat of removal perpetually hanging over their heads.

Come elections, Government will again make a lot of noise about expropriation without compensation and giving land to previously disenfranchised people. Those promises would be easier believed if they did not steal land from their own people to reward cadres and friends, and if the President published the SIU reports to see if justice has indeed been done.

In the meantime, those promises means nothing to the farmers wondering when they will be forced to bid all their hard work good-bye.