On January 8th 1918, U.S. President Woodrow Wilson, announces a 14-point program to end the 1st World War. Long the U.S. president had tried to take the role of a neutral mediator during the war. The U.S. did not declare war on Germany until April 1917. Due to  the “unrestricted submarine warfare” of the German side, the United States saw their transatlantic trade relations at risk. In his 14-point program Wilson consequentially called for the “full freedom of navigation on the seas, …, both in peacetime as in war.” under point 2.

Wilsons demands such as the evacuation by the German Reich of Belgium and the occupied Russian and French territories were incorporated shortly after into the peace treaty of Versailles which however will strongly be attacked but the German side particularly in very conservative circles.

Wilson thus fails in achieving his goal to create the basis with his14 point program for a just and lasting order for peace. However under item 14 of his program the former professor of history and political science for the first time creates the vision of the “United Nations” a forum in which nations in the future were to resolve their conflicts peacefully.

Due to this idea directly after World War I in 1919 the League of Nations is established and based in Geneva. Its main purpose was to secure world peace specifically through arms limitation Article 8 peaceful resolution of disputes Article 12 and the promotion of intergovernmental cooperation. 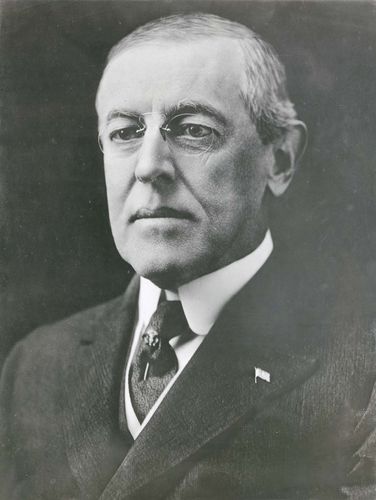 They informed all the decolonization movements and set a new standard of national identity. The idea of the League of Nations was the seed that led to the creation of the United Nations.

In negotiating the Treaty of Versailles, the representatives of Britain, France, and Italy wanted to strengthen their own positions and felt it necessary to leave Germany too weak to start another war. U.S. President Woodrow Wilson accepted almost any compromise of the Fourteen Points as long as the treaty provided for the League of Nations. Many in the U.S. Senate thought joining that organization would sacrifice national sovereignty, so the body voted down the treaty.

On January 8, 1918, President Wilson, in his address to a joint session of the United States Congress, formulated under 14 separate heads his ideas of the essential nature of a post-World War I settlement.

The text of the Fourteen Points is as follows:

1. Open covenants of peace, openly arrived at, after which there shall be no private international understandings of any kind but diplomacy shall proceed always frankly and in the public view.

2. Absolute freedom of navigation upon the seas, outside territorial waters, alike in peace and in war, except as the seas may be closed in whole or in part by international action for the enforcement of international covenants.

3. The removal, so far as possible, of all economic barriers and the establishment of an equality of trade conditions among all the nations consenting to the peace and associating themselves for its maintenance.

4. Adequate guarantees given and taken that national armaments will be reduced to the lowest point consistent with domestic safety.

5. A free, open-minded, and absolutely impartial adjustment of all colonial claims, based upon a strict observance of the principle that in determining all such questions of sovereignty the interests of the populations concerned must have equal weight with the equitable claims of the government whose title is to be determined.

6. The evacuation of all Russian territory and such a settlement of all questions affecting Russia as will secure the best and freest coöperation of the other nations of the world in obtaining for her an unhampered and unembarrassed opportunity for the independent determination of her own political development and national policy and assure her of a sincere welcome into the society of free nations under institutions of her own choosing; and, more than a welcome, assistance also of every kind that she may need and may herself desire. The treatment accorded Russia by her sister nations in the months to come will be the acid test of their good will, of their comprehension of her needs as distinguished from their own interests, and of their intelligent and unselfish sympathy.

7. Belgium, the whole world will agree, must be evacuated and restored, without any attempt to limit the sovereignty which she enjoys in common with all other free nations. No other single act will serve as this will serve to restore confidence among the nations in the laws which they have themselves set and determined for the government of their relations with one another. Without this healing act the whole structure and validity of international law is forever impaired.

8. All French territory should be freed and the invaded portions restored, and the wrong done to France by Prussia in 1871 in the matter of Alsace-Lorraine, which has unsettled the peace of the world for nearly fifty years, should be righted, in order that peace may once more be made secure in the interest of all.

9. A readjustment of the frontiers of Italy should be effected along clearly recognizable lines of nationality.

10. The peoples of Austria-Hungary, whose place among the nations we wish to see safeguarded and assured, should be accorded the freest opportunity of autonomous development.

11. Rumania, Serbia, and Montenegro should be evacuated; occupied territories restored; Serbia accorded free and secure access to the sea; and the relations of the several Balkan states to one another determined by friendly counsel along historically established lines of allegiance and nationality; and international guarantees of the political and economic independence and territorial integrity of the several Balkan states should be entered into.

12. The Turkish portions of the present Ottoman Empire should be assured a secure sovereignty, but the other nationalities which are now under Turkish rule should be assured an undoubted security of life and an absolutely unmolested opportunity of autonomous development, and the Dardanelles should be permanently opened as a free passage to the ships and commerce of all nations under international guarantees.

13. An independent Polish state should be erected which should include the territories inhabited by indisputably Polish populations, which should be assured a free and secure access to the sea, and whose political and economic independence and territorial integrity should be guaranteed by international covenant.

14. A general association of nations must be formed under specific covenants for the purpose of affording mutual guarantees of political independence and territorial integrity to great and small states alike.

On October 3–4, 1918, Prince Maximilian of Baden, the German imperial chancellor, sent a note, via Switzerland, to President Wilson, requesting an immediate armistice and the opening of peace negotiations on the basis of the Fourteen Points. Germans would later argue a “betrayal” when faced by the harsher terms of the Armistice and the Treaty of Versailles.

Jacqui Rossi explains the details of President Woodrow Wilson’s 1918 plan to end World War I by assessing both the causes of war and solutions for peace.

Wilson’s Fourteen Points were based on a major idea – the principle of self-determination, under which nationalities would have their own states.   The members of a nationality or ethnic group share a cultural heritage, often associated with the place of its members’ birth or descent.   With the collapse of the Ottoman, Russian, Austro-Hungarian, and German Empires during and at the end of the war, the peacemakers at Versailles expected to draw new borders, creating new nations with racial or ethnic homogeneity.

The Versailles delegates believed that this would substantially decrease, if not end, violence between different nationalities inhabiting the same country.     But as historian Margaret MacMillan explains …

“The possibilities for dividing up peoples were unending, especially in central Europe, where history had left a rich mix of religions, languages and cultures. About half the people living there could be counted as members of one national minority or another. How were peoples to be allocated to one country or another when the dividing lines between one nation and another were so unclear?”

Articles 81, 82, and 84 show how the treaty attempted to address this question in the newly created state of Czecho-Slovakia.

ARTICLE 81.
Germany, in conformity with the action already taken by the Allied and Associated Powers, recognises the complete independence of the Czecho-Slovak State. . . .

Germany hereby recognises the frontiers of this State as determined by the Principal Allied and Associated Powers and the other interested States.

The old frontier as it existed on August 3, 1914, between Austria-Hungary and the German Empire will constitute the frontier between Germany and the Czecho-Slovak State.

SELF-DETERMINATIONA related question, addressed in Article 22 of the treaty, was whether the principle of self-determination should apply to the people of former German colonies and current Allied ones.

To those colonies and territories which as a consequence of the late war have ceased to be under the sovereignty of the States which formerly governed them and which are inhabited by peoples not yet able to stand by themselves under the strenuous conditions of the modern world, there should be applied the principle that the well-being and development of such peoples form a sacred trust of civilisation and that securities for the performance of this trust should be embodied in this Covenant. The best method of giving practical effect to this principle is that the tutelage of such peoples should be entrusted to advanced nations who by reason of their resources, their experience or their geographical position can best undertake this responsibility.

Self-determination is the right of a country to be independent, instead of being controlled by a foreign country, and to choose its own form of government.

Self-determination, is a process by which a group of people, usually possessing a certain degree of national consciousness, form their own state and choose their own government.   As a political principle, the idea of self-determination evolved at first as a by-product of the doctrine of nationalism, to which early expression was given by the French and American revolutions.

In World War I the Allies accepted self-determination as a peace aim.

In his Fourteen Points – the essential terms for peace – U.S. Pres. Woodrow Wilson listed self-determination as an important objective for the postwar world; the result was the fragmentation of the old Austro-Hungarian and Ottoman empires and Russia’s former Baltic territories into a number of new states.

Self-determination is the right of a country to be independent, instead of being controlled by a foreign country, and to choose its own form of government.   https://www.collinsdictionary.com/us/dictionary/english/self-determination

If a country has or gains independence, it has its own government and is not ruled by any other country.      In 1816, Argentina declared its independence from Spain.
https://www.collinsdictionary.com/us/dictionary/english/independence