Kosovo president, Hashim Thaci, has commended US President, Donald Trump, on the attention his administration is paying to disagreements between Kosovo and Serbia. Thaci in an interview with T7 program ‘A Show’ said Trump’s special envoy on Kosovo Serbia dialogue, Richard Grenell, is doing “great job.” 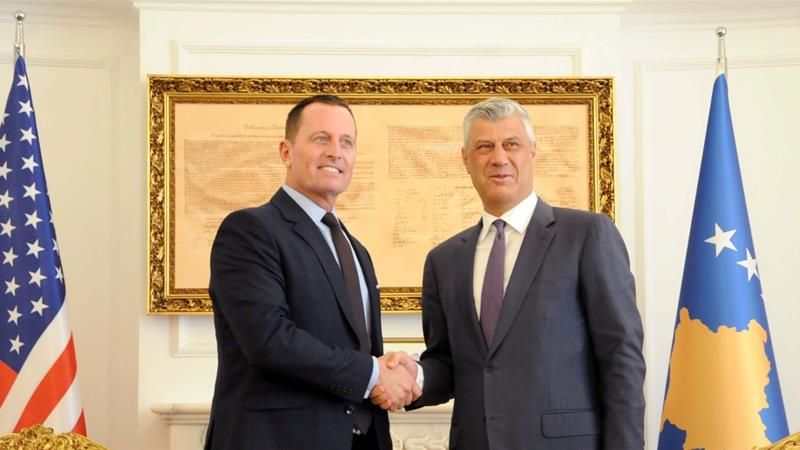 Ever since Kosovo declared independence in 2008 from Serbia, it has focused its foreign policy on achieving international recognition. Today, its foreign ministry claims that 116 countries have recognised its sovereignty.

Serbia, which rejected its secession after the 1999 war and NATO bombing campaign, has fought back. It has led a parallel campaign, claiming that it convinced some 17 countries over the past two years to renounce their recognition of Kosovo.

Russia has also backed the proposal for a land swap with Kosovo. If the deal goes through, this may further destabilise the region. Bosnian officials fear that the leadership of the Serb-majority entity in Bosnia and Herzegovina could use the redrawing of Kosovo’s borders as a basis for their own secessionist goals.

Just recently, a scandal involving a GRU agent trying to recruit former members of the Serbian military prompted fears of Russian intelligence officers using the Balkan country’s favourable approach towards Moscow as an excuse to use it as a back yard for its regional operations. Russia has already been accused of orchestrating a failed coup in Montenegro and could also contribute to regional instability.

The Chinese have invested in everything from ports in Croatia to steel factories in Serbia. Hungary and Serbia have also recently joined the club of European countries allowing its tech giant Huawei to set up their national 5G networks; most EU states have shunned Huawei’s involvement, for fear of making it easier to conduct state-sponsored cyberattacks from China. In Belgrade, Huawei has also been involved in installing facial-recognition cameras similar to those already found in China.

US Ambassador to Germany and Trump’s envoy on dialogue brokered last month two important deals between Pristina and Belgrade on restoring air and railway link between Kosovo and Serbia. “What others did not manage in 20 years, Grenell achieved in months,” Thaci said, while criticized the European Union for betraying Kosovo. “Kosovo is betrayed by the EU, especially when it comes to visa liberalization,” Thaci said. Kosovo President accused the EU on “absolutely unnecessary prejudice in relation to accomplishments of Kosovo.”

Kosovo President: US Envoy Grenell achieved in months, what others did not manage in 20 years

Kosovo authorities have been under relentless pressure from Western allies to remove the tariffs. Trump’s special envoy for Kosovo and Serbia, Richard Grenell, urged the new Kosovo government to drop tariffs.

“We expect the tariffs to be dropped immediately,” said Grenell, who is also U.S. ambassador to Germany. “We made clear to all the [Kosovo] party leaders that dropping the tariffs was in the best interest of Kosovo and its economy, and the desire to attract new businesses. And the party leaders agreed,” he said in an emailed statement to The Associated Press.

European Union-mediated talks between Serbia and Kosovo over normalizing relations stalled after the previous Kosovo government imposed 100% tariffs on Serbian goods to protest efforts by Belgrade to block Kosovo’s accession into international organizations.

On Thursday, former Prime Minister Ramush Haradinaj, who introduced tariffs in 2018, urged Kurti in an open letter “not to drop the tariffs.”  Haradinaj said that “the 100% tax is imposed as a defensive measure against Serbia’s aggressive policy toward Kosovo and can be revoked with recognition.”

Negotiations with Serbia remain one of the main challenges facing the new prime minister and his government.

Kurti does not rule out the possibility of reaching an agreement with Serbia this year.

“It’s possible, but I cannot foresee such a thing now. Now, I can express my will for dialogue, for open and principled dialogue,” he said.

Serbia and its ally Russia do not recognize Kosovo’s independence.

Since its declaration of independence, more than 100 countries have recognized Kosovo, including the United States and most EU nations.

U.S. President Donald Trump has said that he wants U.S. Ambassador to Germany Richard Grenell to be his special envoy for the Belgrade-Pristina dialogue, the White House has stated.

If his appointment is confirmed by the Senate, Grenell would perform both duties.

Radio Free Europe (RFE) says that Trump’s decision comes as quite a surprise, seeing as diplomat Matthew Palmer was appointed in late August as Secretary of State Mike Pompeo’s special representative for the Western Balkans.

According to the Voice of America (VOA), Grenell is a foreign policy commentator, while as a consultant he spent several years working as media adviser to numerous U.S officials at various levels of government. He was also the spokesperson of the U.S. mission to the U.N., working under four ambassadors.

The Washington Post says that Grenell is Trump’s trusted aide and that last December he met with Kosovo President Hashim Thaci, who allegedly promised him that the tariffs on Serbian imports would be abolished.
According to RFE, in a tweet Thaci welcomed Grenell’s appointment and said he was looking forward to cooperating with him.

The EU is also expected to appoint its own representative for the Belgrade-Pristina dialogue.

VOA says that Grenell’s term as U.S. ambassador to Germany has been filled with controversy almost from day one.

He first sparked criticism by saying that German companies should stop doing business with Iran, after the U.S. pulled out of a nuclear agreement with the country, and then gave an interview to the right-wing website Breitbart News in which he said he wanted to strengthen European right-wing parties and movements. That statement was condemned by the German authorities and the opposition.