Mandela continued to define farm murders as, “In the period January 1 to November 24  2017 there were 51 crimes occurred on the Free State farms. During the commission of these crimes, 14 murders occurred, with only three known instances in which the motive was murder. Arrests have been made for ONLY 11 of these murders.”  “To illustrate the seriousness with which the Police Service has treated these crimes, the success rate achieved in terms of arrests and convictions amounts to around 85 percent. The propaganda that the Government and Police are doing nothing is again entirely without substance.” 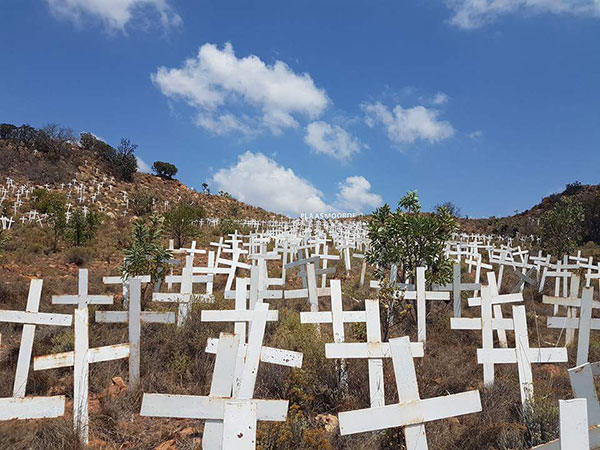 Horrific farm murders, brutal killings of farmers and their families have intensified since 1994, the birth of democracy. Nelson Mandela during his report to the 50th National Conference of the African National Congress (ANC) on 16 December 1997 did not sympathize with the brutal murders of farmers but instead said, “The truth about this matter is studiously and systematically suppressed for political reasons.”

In his lengthy speech, Nelson Mandela referred to the farm murders as a “tremendous barrage of propaganda and threats of vigilance action occasioned by the murder of white farmers.”

But in the battle to serve narrow partisan interests, our opponents do not hesitate to sacrifice the truth.”

Twenty years ago, the killing of farmers did not draw support or attention from the ANC government, and today, it is no different. The only difference today is that farm murders have increased causing the minority group to remain under threat of survival, especially farmers.

In 1997, as Mandela mentioned there were 51 crimes in Free State farms only resulting in the murder of 14 farmers. Statistics confirmed the following farm attacks and killings for the three months January 2017 to March 2017 – 130 farm attacks resulting in 26 farm murders. Read Farm attacks statistics for this year – 2017

AfriForum released the statistics for the 2016/2017 farm attacks/murders in April this year stating that there were 357 farm attacks resulting in 74 farm murders.

26 Murders reported during a period of three months in 2017 and a shocking 74 murders for the period 2016/2017, compared to the 14 murders during 1997 as Mandela quoted, is a shocking revelation of how dangerous the situation remains.

The current ANC government under the leadership of Jacob Zuma has ignored the warnings, moderated the critical instability, and allowed the farmers to be murdered while destroying the country’s food security.

The manner in which the farmers and families are tortured before being murdered is savage behavior and includes burning people with an iron, chopping people with pangas, raping the women, and targeting the elderly. It is barbaric and inhumane to watch people suffer and die. Astoundingly, the savages do not steal much but will spend hours torturing the landowners instead.

Then the majority have people who openly post hate speech, agreeing that farm murders should be brutal on social media such as this post “I do not know whether they expected blacks to be sympathetic towards them nah? As much as I hate crime, honestly, I personally do not feel any form of empathy or sympathy towards those farm victims, and I am bold enough to say it. Whites have abused, mistreated and exploited us for centuries, so I am not amazed why those people are brutally murdered, brutes deserve brutality.”

The ANC allow and continue to support the oppression of the white minority group, hinder resolution and reconciliation of the Rainbow Nation. The ANC has actively maintained their terrorist activities against the white people of South Africa by allowing farm murders, crime, and corruption to escalate to uncontrollable proportions.

Nelson Mandela never condemned farm murders and boasted that the South African Police made significant strides in detaining the perpetrators, and perhaps they did. As farm murders escalate, the ANC follow the same resolution of allowing the barbaric killings of farmers to continue. More often than not, when a farm murder is committed, the ANC government will not condemn such an attack but will offer condolences to terrorists killed. Mandela reflected on crime in general and said, “Facts and figures actually disprove the notion that there has been a rapid escalation of these crimes and confirm that we inherited the high levels of these crimes from the apartheid system.”