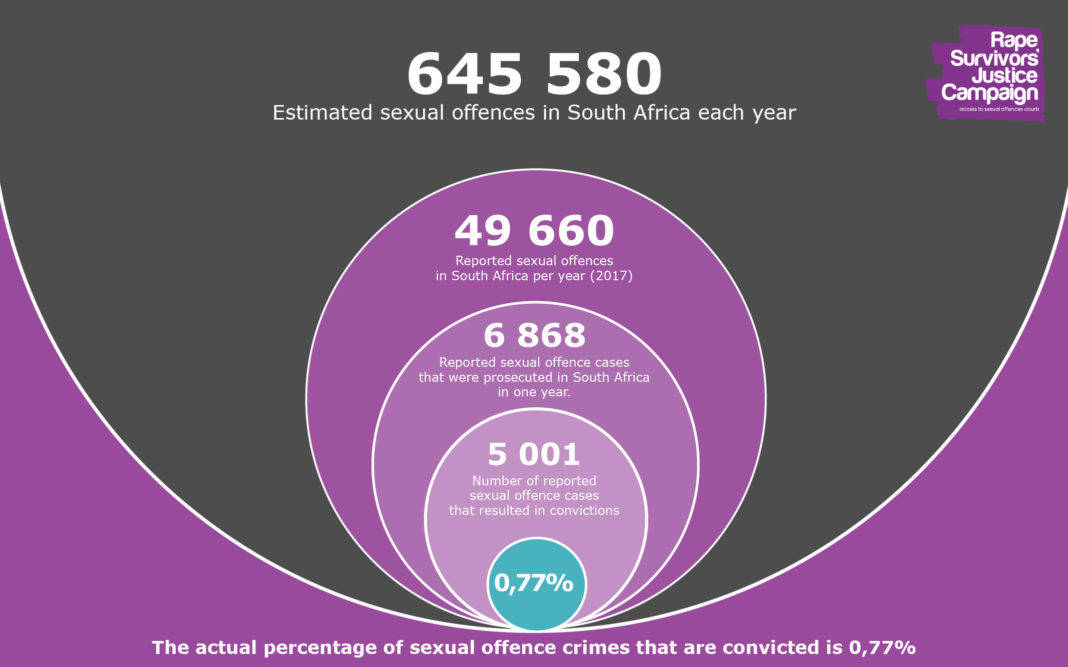 In general, violent crime in South Africa is rife and horrific, but the prevalence of sexual assault and violence has led to South Africa being dubbed “the rape capital of the world”. This is largely attributed to the pervasive rape culture that exists in the country.

Feminist author Emilie Buchwald describes rape culture as, “a complex set of beliefs that encourage male sexual aggression and supports violence against women. In a rape culture, women perceive a continuum of threatened violence that ranges from sexual remarks to sexual touching to rape itself.

A rape culture condones physical and emotional terrorism against women as the norm . . . In a rape culture both men and women assume that sexual violence is a fact of life, inevitable”.

One of the biggest problems with an inescapable rape culture is that it directly affects survivors getting justice for the crime because not only do many victims feel as though they won’t be believed; there is a widespread belief that many victims are to blame for being raped because of wearing revealing clothes, being intoxicated or even due to their sexual orientation among others. Of course, this is all nonsense as the victim is never at fault.

These normalised ideas also impact how many law enforcement authorities view victims and, thus, process rape kits and investigate cases. Naturally, this has a knock-on effect because a survivor might then think that a case will be thrown out of court due to insufficient evidence or the rapist will be given a lesser jail sentence.

And it is all backed up by statistics: it is estimated that 90% of all rapes are not reported to the police. Arrests are made in less than 50% of the reported cases. Less than 15% of accused are taken to trial and 5% of rapists who are tried are convicted. When it comes to sentencing, over 15% of convicted rapists get less than the mandatory sentence of 10 years. More than 40% of convicted rapists are eligible for life sentence. Less than 9% of those eligible for life sentence get life sentence.

In South Africa, a rape victim who sues for civil damages will usually be entitled mainly to general damages, which are paid as compensation for shock, pain and suffering, disfigurement, disability and loss of enjoyment of life. General damages are granted on a case-by-case basis and are at the discretion of the judge, although awards made in previous, comparable cases often play a big role.

In an ongoing case, Gauteng businesswoman Andy Kawa is currently in court suing the South African Police for wrongfully and negligently breaching its duty to investigate her allegation that she had been abducted, held hostage and gang-raped by a group of men in 2010. Kawa is seeking damages of just under R6-million.

In 2003, a woman sued the state for damages after she was sexually assaulted and robbed by a dangerous criminal and serial rapist who had escaped from police custody two-and-a-half months prior to the attack, and in 2002, a woman sued the Minister of Safety and Security damages for the harm that she suffered due to being brutally attacked by a man who was awaiting trial for the alleged attempted rape of another woman. Despite his history of sexual violence, the police and prosecutor had recommended his release without bail. In the High Court the Applicant alleged that she had been attacked.

In 2017, the Court awarded a woman who was raped by three men at a holiday resort owned by the Witzenberg Municipality R840,000 (the highest damages award to date in a local civil case relating to sexual assault). Of course, the men were employed by the municipality.