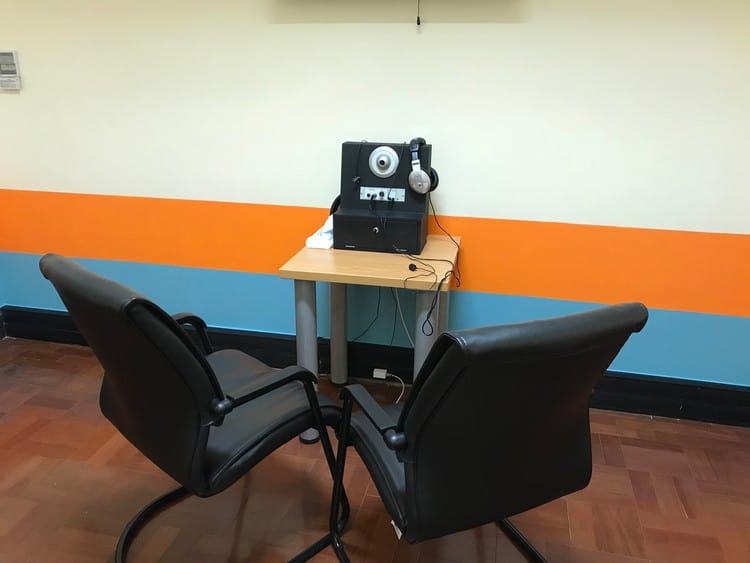 The magistrate, prosecutor, and two bailiffs joke with one another as they rush through cases at Court 16 at the Cape Town Magistrate’s Court. Sexual offence cases come here first, a court which deals with contact cases such as murder, assault, and rape. There is the shuffling of papers and ten-minute-long breaks between each bail application.

In one instance, a trial is postponed for three weeks because of a missing docket, the same missing docket that has caused the last three postponements out of a total of ten. The defence attorney argues with the magistrate, pleading for his client.

“We cannot proceed without the police docket,” says the magistrate. He looks to the prosecutor. “Has a letter been sent yet to the police for the docket?”

“Yes, I have sent the letter and we’re awaiting a response,” says the prosecutor.

The defence attorney looks dumbfounded. He has heard this many times before.

There are loose wires all over the floor, and the woodwork of the benches and walls are in poor condition, scratched up and graffitied.

Rape cases that are deemed “more serious” go across the street to the Regional Court to Court I, which is dedicated to sexual offences.

Court I is a grade-up from Court 16. There is air conditioning, clean seats and no graffiti.

On Tuesday morning, a girl who turns 16 this week arrived in Court I. The trial against her alleged assailant has been pending for almost six years. She will have to come back to court as the trial was postponed yet again.

The teenager testifies in a separate room from where the magistrate and accused are sitting. She has a court-appointed intermediary, who declines to tell GroundUp about this specific case, and the court generally bars the public and reporters from being in court when rape survivors testify.

The court-appointed intermediary is the last person to work with child rape survivors. Usually a social worker has advised them to testify with an intermediary. Otherwise, the child makes her statements and testifies alone. They are not allowed to have family in the room.

The intermediary conveys messages from the court to the child, who then responds directly to the court. This is called a “closed circuit” trial. This way complainants do not have to come face-to-face with the accused on the stand.

The intermediary says, “They can see us, but we can’t see them.”

There is a television in the courtroom so that the accused, magistrate, attorneys, and police can watch complainants recount how they were sexually assaulted. The magistrate will demand every detail of the complainant’s story, says the intermediary.

When a juvenile is accused of sexual assault, only the family is allowed inside the courtroom. “They kick everybody out,” says a complainant whose trial just got postponed for the third time.

Getting to the point where a rape survivor testifies can take months, even years. Postponements by South Africa’s magistrates are the norm in sexual offence cases.

“People appear in court just to get their trial postponed,” says Toby van Schalkwyk, clerk of the Regional Criminal Court.

If it’s a one-time offence, there are fewer postponements for trial. With repeated sexual offences, convictions are harder to come by, explains one intermediary, who asks to remain anonymous.

“Chances of finding DNA evidence are slim when the offender is alleged to have raped someone [repeatedly] for weeks, months, or years,” says the intermediary. The less evidence there is, the more likely the trial is to be postponed.

On the day of the trial, both the complainant and the accused are told to show up at 9am, but the trial typically won’t happen for another one to two hours. Once the trial begins, the prosecutor must convince the magistrate that the accused is guilty beyond reasonable doubt. Otherwise, the magistrate will acquit.

When a rapist is convicted, the minimum sentence is ten years for a first offence, 15 for a second, and 20 for a third. If the victim is a child, their abuser gets life imprisonment.

A prosecutor, who wishes to remain anonymous, explains that convictions depend on the magistrate. There is a pattern to how they handle rape trials at the Regional Court. For example, if the complainant was club hopping and the accused took advantage of the victim’s drunken state, there is usually an acquittal.

When the accused has been convicted by the Regional Court, the case automatically goes on review to the High Court. The prosecutor explains that no magistrate wants their sentences overturned at the High Court.

“It limits their career,” the prosecutor says. Even if it’s clear the victim is telling the truth, few magistrates are willing to sentence the accused, she says.

If prosecutors don’t have DNA evidence, it is very difficult to convict. The accused will take care to prevent DNA from showing up, like using a condom. “It’s a game. The defence will come up with plausible versions to create doubt in the mind of the magistrate.”

The prosecutor explains how rape trials can have an impact on the accused. “I know [accused] people who’ve had to take second bonds on their homes to pay for their attorney.”

Rape survivors are forced to wait in anticipation before they must retell their story to the magistrate. A court interpreter says, “Sometimes, they postpone the trial again because they [victims] just break down.”