Die berigte oor tekorte aan steenkool het nie verdwyn nie, dit groei al groter – maar daar word nou bewerings gemaak dat daar baie steenkool is, terwyl Guptas en onbekwame personeel vir beurtkragte verantwoordelik gehou moet word.  Andersinds word daar heelwat steenkool uitgevoer na China en Indië.   Dus as die berigte waar is, dat die steenkool ophoop by die “voorsieners” (of is dit klieks) , dan saboteer Eskom nie net hulself nie, maar ook elke verbruiker in hierdie land.  Dis verregaande dat daar genoeg steenkool is en intussen word elektrisiteit afgeskakel, toerusting verniel ook in die proses en verskillende  besighede lei skade.  Waarom het Eskom die Guptas 75% afslag gegee in 2017.    En nou soek Eskom meer geld vanaf die verbruikers en staatskas.  Lees meer.   Who are involved and what are the real reasons behind Eskom and their corruption, the so-called “no coal” is a story and not the truth.   Like land expropriation is the same – they want to get the land to give it to China and their own businesses.  How is it so “cool” to export to the east, and leave us without any electricity.  This is not cool at all.  They are steeling our human rights.  More than 5000 farms were bought by ANC government and it is still with them – no land expropriation. 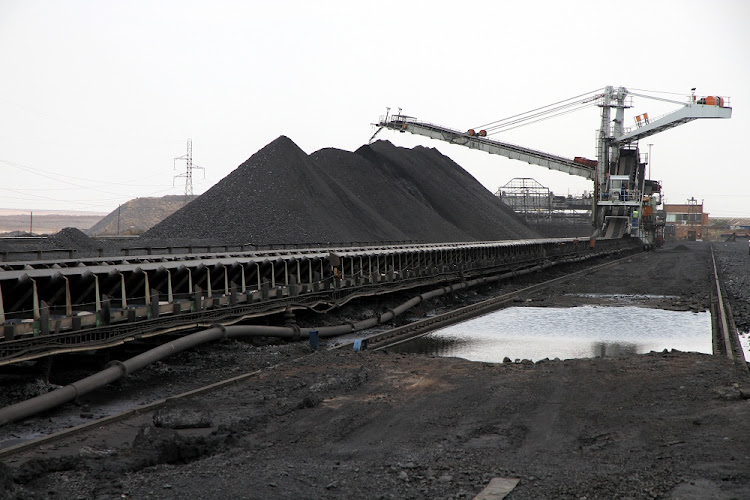 MEDIA AND ARTICLES ABOUT THE COAL SITUATION IN SOUTH AFRICA

ESKOM ALLOWS THIS:   STEALING OF ELECTRICITY

Eskom wants the government to absorb about R100 billion of debt as part of a rescue plan for the state-owned utility, Business Day reported, a move that will put further strain on already stretched state finances.    The proposal may add 2 percentage points to South Africa’s debt-to-GDP ratio, the Johannesburg-based newspaper said. It cited Eskom chairman Jabu Mabuza as speaking on the proposal in an interview during an investor roadshow.

The report comes after finance minister Tito Mboweni said Eskom should go to bond markets for funds rather than rely on state bailouts, which have been used in the past. The utility’s debt has increased to 419 billion rand, and the company has resorted to rolling blackouts as insufficient spending on maintenance has reduced its ability to generate electricity.   While the government hasn’t received a proposal from Eskom, any proposition for debt relief will have to be assessed in the context of the turnaround plan that Eskom is expected to present soon, National Treasury spokesman Jabulani Sikhakhane said in an emailed response to questions. The government’s policy stance is that funding for state companies must be “done in a deficit-neutral manner,” he said.

Eskom won’t comment further on the turnaround plan until all “stakeholders” have been consulted, spokesman Khulu Phasiwe said by phone. Pravin Gordhan, the minister for public enterprises, declined to comment. Eskom’s troubles represent a wider decline at South Africa’s state companies during the nine-year tenure of former President Jacob Zuma, during which corruption became rife. His successor, Cyril Ramaphosa, has pledged to wipe out graft and has shaken up management at Eskom, ports and rail firm Transnet and South African Airways, yet the task at hand is considerable.

Ratings agencies have warned that Eskom is a risk to the health of South Africa’s economy, and the latest news is likely to take the gloss off better-than-expected GDP figures on Tuesday, which lifted the country out of recession.   The rand was little changed at 13.85 to the dollar at 8:10 a.m. in Johannesburg Wednesday, after weakening 1.2% the day before.   Cost compression, revenue enhancements and debt relief are core aspects of Eskom’s turnaround strategy, Business Day cited Mabuza as saying.
*

There is no shortage of coal, as Eskom claims. Instead, the coal is piling up at the mines, uncollected by the utility, Anna Marth Ott, CEO of Middelburg Chamber of Commerce and Industry, said yesterday.

Middelburg is positioned between three large Eskom power stations, and there are 170 coal mines within a 200 km radius of the town.

Speaking to The Witness yesterday, she said that Eskom had ceased taking delivery of the coal for reasons unknown to her, for the past month, and that its “wording” to the public about the coal shortage was incorrect.

“How can Eskom tell us there is no coal?” she asked.

Spokespeople for Eskom did not respond to questions from The Witness about the coal supplies by the time of going to print.

Cash-strapped Eskom is struggling to emerge from a financial crisis characterised by declining electricity sales, ballooning debt and liquidity problems.   Mabuza made the comments to Business Day as Eskom was meeting investors on a roadshow to London and the United States this week.

A financial market source in London confirmed to Reuters that Mabuza had told investors about moving R100 billion of Eskom’s debt onto the government’s balance sheet during the roadshow.    Eskom spokesman Khulu Phasiwe declined to elaborate, saying the turn-around plan is still under discussion with key stakeholders in government.

Mabuza told a news conference last week that asset sales could not solve Eskom’s problems and that a bailout or debt relief were preferable.   According to the Witness newspaper, the CEO of Middelburg Chamber of Commerce and Industry says Eskom’s claims of a shortage of coal are untrue. She alleges that coal has been piling up at the mines (there are 170 within 200 km of Middelburg) in the past month and not being collected by Eskom.   News24 meanwhile says that the coal shortage can be blamed on the Gupta family whose mines under-supplied to Eskom, while selling coal abroad. Apparently the Gupta’s Tegeta Resources and Energy under-supplied by nearly four million tons of coal… and instead exported that – at an alleged profit of around R3-billion.   Eskom expects to make a loss before tax of more than R11.2 billion this financial year.

After driving Optimum Coal into business rescue last year, thereby endangering almost 2,000 jobs at the mine, Eskom suddenly reached a settlement that gave the Gupta family a 75% discount on the R2.1bn fine it had levied on the company at the time it was owned by global commodities trader Glencore.

Business Day can now reveal that in March this year, Eskom agreed to accept a R500m settlement for the non-performance penalties it had levied on Glencore. The agreement was reached after Eskom issued Glencore a summons demanding the payment of the fine for what it said the was the miner’s failure to deliver suitable coal for the Hendrina power station.

This was despite Eskom’s initial stance that it would not negotiate with Glencore and would recover every cent of the penalty.

At the time, in September 2015, then Eskom CEO Brian Molefe vowed Eskom would not enter into discussions with Glencore or Optimum. “We want our money and we will recover all of it,” said Molefe. He insisted there was nothing to negotiate about. Glencore made numerous attempts to renegotiate the penalty, and to renegotiate its R150 per tonne, 40-year coal supply agreement with Eskom, which it said was below the cost of production.

The business rescue practitioners put the company up for sale, and the Gupta family, through its Oakbay Resources & Energy commenced negotiations to buy it. Eskom’s hard stance continued throughout the sale process. The Guptas took over the company last year, after which Eskom was willing to negotiate on the R2.1bn penalty.

Eskom was keen to recover its R2.1bn fine from Glencore-owned Optimum, but its executive responsible for coal procurement, Matshela Koko, lied on live television about Eskom assisting the Gupta’s Tegeta Resources with R695m in pre-payment for another of its companies that supplied Eskom. This money was used by Tegeta to fund its acquisition of Optimum, former public protector Thuli Madonsela said in her investigation report into state capture last year.

When the private arbitration concluded this year, Koko was Eskom’s acting CEO. Eskom declined to divulge the quantum of the agreement, citing a confidentiality clause, but sources leaked the information to Business Day.

Blom warns that Eskom has less than ten days to implement drastic corrective measures or South Africa will face another blackout‚ which SA struggled with in 2008.

Blom‚ a partner at Mining and Energy Advisors‚ said that as the Tegeta mines are now in business rescue‚ “a good couple of billion rands will be required to restart operations”.

“Given that the Optimum contract expires at the end of 2018‚ that is hardly likely to happen‚” he said in a statement.

According to Blom‚ Tegeta provides an estimated nominal nine million tons of coal per year into the Eskom supply chain‚ and with operations now closed‚ Eskom is short more than one million tons per month.

“Eskom management should have seen this train smash coming more than six months ago‚” said Blom.

Proper coal supplier management with accurate dashboards of coal availability per operation‚ would have revealed the Tegeta supply as erratic and on a downward trend. Furthermore‚ routine monthly mine visits by Eskom senior management should have shown the plant was scavenged‚ he asserted. “This situation has been public knowledge for months‚ especially in mining circles.”

SA is now running on the expensive open cycle gas turbines which burn more than a billion rand of diesel per month and have been doing so since the beginning of 2018‚ he said.

Whereas Eskom claims to have 30 days coal stockpiled‚ Blom indicates this includes more than 10 million tons at Medupi – which is inaccessible to the Mpumalanga stations where the shortage exists.

Eskom executives told MPs on Wednesday that the total system stockpile for all power stations was now at 34 days. If Medupi and Kusile were included‚ this rose to 67 days. They said they needed urgent authorisation from the Treasury to purchase more coal without having to go to tender‚ as seven power stations have coal stockpiles that are lower than the levels required. Meanwhile‚ coal is being moved from stations that had healthy stockpiles to stations that did not have sufficient stock.

“Eskom has been relying on emergency‚ diesel-driven‚ open-cycle gas turbines regularly to meet demand this year. The latest coal supply reports suggest that Eskom’s current coal supply problems are as serious‚ if not worse‚ than those that existed in South Africa shortly before the load shedding of 2008‚” he wrote on the website ee publishers.

Energy expert Ted Blom says that Eskom is in crisis, which is evident by the current daily load-shedding schedule being implemented as the state owned company struggles with coal shortages and rising maintenance costs.

Load shedding is conducted rotationally as a measure of last resort to protect the power system from a total collapse or blackout – but speaking  to Jacaranda, Blom said that Eskom is in a daily fight to keep the power from being turned off completely.

Worryingly, a scenario where the power could go off, and not come back on again is definitely possible, the expert said.

“It is a possibility every day, because if the demand for electricity exceeds the availability of electricity with 1 KW, then the network will fail. We are on the brink every day. That is a daily fight,” he said.

Blom said that if a team at the control centre in Simmerpan goes to sleep for a single second, and demand exceeds supply, “it will be like putting a spanner into your bicycle wheel, the whole system will just collapse”.

If preventative measures fail, or load shedding is insufficient, the national grid will collapse leading to a nation-wide blackout.

And should Eskom’s preventative measures fail, the consequences would be disastrous – and it would take weeks to rectify, Eskom has said.

While most South Africans will be familiar with 4 stages of load shedding, Eskom recently extended this to 8 stages in total, which will allow up to 8000 MW of power to be shed in extreme circumstances, to further prevent a total blackout.