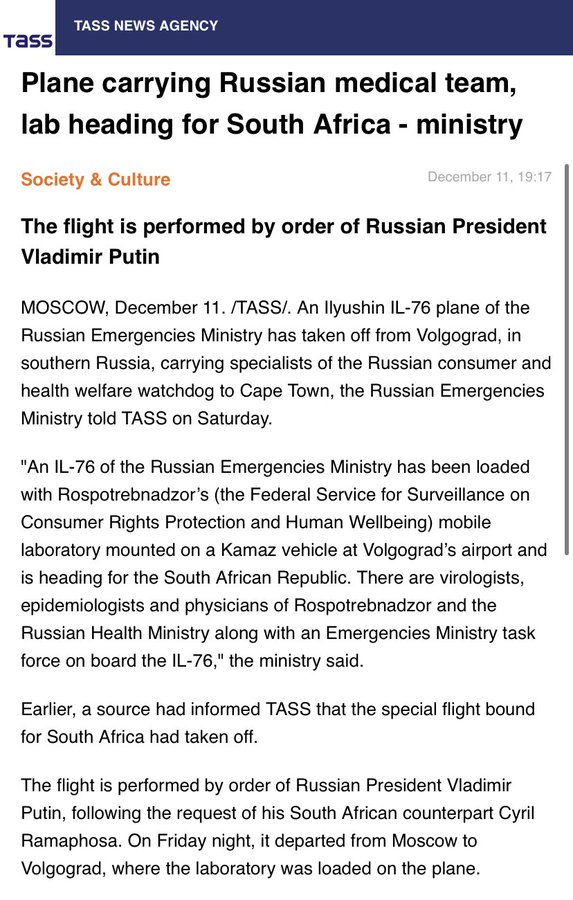 Is this unusual – time will tell. Russia has reportedly sent a team of virologists, epidemiologists, and physicians and a mobile lab to South Africa on board an Il-76.

The parties continued their discussion of the two countries’ interaction in the context of the newly identified Omicron strain of the coronavirus. They agreed on having a group of Russian virologists, epidemiologists, researchers, and doctors, as well as a sanitary-epidemiological laboratory and other medical equipment sent to South Africa in the very short term.

Vladimir Putin had a telephone conversation with President of the Republic of South Africa Cyril Ramaphosa.

Russia’s leader made the pledge during a telephone call with his counterpart from South Africa Cyril Ramaphosa, who thanked Russia for its cooperation, the Kremlin said in a statement.

“An agreement was reached to send a group of Russian virologists, epidemiologists, researchers and doctors, as well as a sanitary-epidemiological laboratory and other medical equipment to South Africa in the very near future,” it read.

The detection of the first Omicron cases two weeks ago coincided with surges in infection numbers across the world, and the variant added fuel to concerns about a global COVID resurgence.

Russia at the beginning of the pandemic was accused of playing politics with virus aid and critics said its shipments of military doctors and medical equipment to Italy and Serbia was meant to curry favour in Europe.

Moscow last year sent a shipment of ventilators to the United States under the administration of Donald Trump but the equipment was found to be faulty was never put to use.
https://ewn.co.za/2021/12/09/russia-to-send-virus-specialists-to-south-africa-to-establish-covid-19-lab

That means Ramaphosa did not have a lot of trust in his own people or are there other plans to play the game further.

AND who will pay for this expensive aircraft and whatever on that plane?   Those people that make use of air or ship travelling, are all vaccinated peoples.

On November 26, the World Health Organization (WHO) designated the B.1.1.529 variant identified in South Africa as a “Variant of Concern” and assigned it the Greek letter Omicron. In its statement, the WHO noted that “this variant has a large number of mutations, some of which are concerning.”

If you want to truck this aircraft, look for yourself.

If you want to track the aircraft on its way to South Africa, it's RA-76841 flying as SUM9125. https://t.co/iYL0VGrxxMhttps://t.co/yGueIMRHDlhttps://t.co/QQhQgg7n6r