The government has spent close to R1-billion over the past five years paying for Cuban mechanics and technicians to repair and maintain part of the military’s fleet of ageing vehicles.   This includes trucks that the army had written off in 2014 because they were considered beyond economically viable repair.

“But does that mean we needed to bring Cubans to do what South Africans are perfectly capable of doing, when jobs have always been hard to come by?”

The Cuban contract was signed with Tecnoimport, a state-owned company that imports and exports technical products for Cuba’s ministry of the interior and ministry of the revolutionary armed forces.

According to the contract, which was signed in August 2014, money for the 150 technicians and specialists would be paid — in euros and US dollars — to another Cuban entity, Tecnotex, a powerful company run by the Cuban military that was embroiled in a huge corruption scandal in 2011.

The South African Defence Force entered into a contract with Cuba for 150 technicians and specialists to keep the trucks running, and also to teach SANDF members how to fix them.

Besides salaries, their accommodation, transport, meals, and entertainment were paid while they are in the country.

The hiring of the mechanics to repair and maintain vehicles that were largely manufactured in South Africa by state arms manufacturer Denel has always been a sore point for servicemen, the defence industry, military enthusiasts and the press.

At the time, in March 2015, SANDF spokesperson Siphiwe Dlamini was quoted as saying that anyone who had a problem with the Cuban contractors could “jump in a lake”, and that the defence force would “keep on using [the mechanics] as long as we please”. 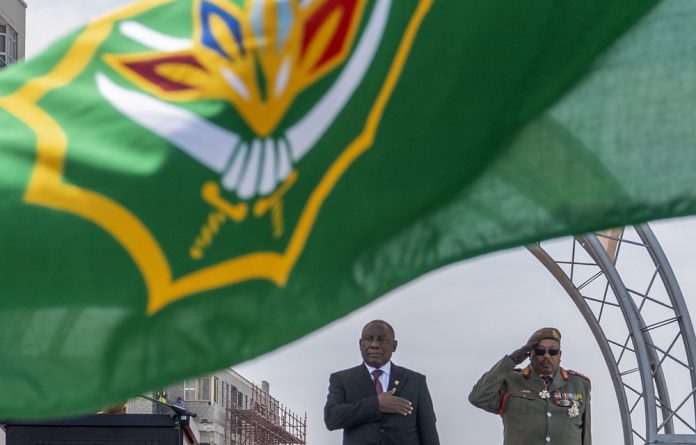 Dlamini had also said that Shoke handled 90% of military matters and was authorised to make army-to-army agreements, and that the local vehicle repair industry had exploited the military for years. A government source this week said: “It is true, though, that local mechanics were taking us for a ride. Imagine paying to move trucks and other vehicles from CAR [the Central African Republic] or the DRC [Democratic Republic of Congo] to South Africa for repairs, and when we get it back it breaks down within a day, or never even starts moving.   The cost of the contract grew astronomically, from R35-million a year on salaries alone in 2015 to R900-million for everything including salaries, accommodation, and transportation in the last financial year. It could not be established how much of this R900-million was made up of salaries.

The contract stipulates that the defence force, as the client, is responsible for paying salaries as well as accommodation, meals, limited entertainment and allowances while the Cubans are in South Africa.

Another clause requires that the defence force be responsible for transporting any goods bought by the Cubans. A military insider said this was a bone of contention because they had had to charter a C130 Hercules cargo aircraft to ferry appliances and furniture bought by one of the mechanics.

Ninety-three Cuban technicians arrived in South Africa , including nine with the SA Army’s 102 Field Workshop in Potchefstroom. At the moment Samil trucks from Wallmansthal are being refurbished but other vehicles may be repaired at a later stage.    And, 130 vehicles have been earmarked for refurbishment but the SANDF is looking at overhauling 250 trucks. Three vehicles have been completely refurbished so far with others in the works. The first vehicle, a Samil 20, had 250 hours of work done on it involving the engine, differentials, electrical system, pneumatic system, bodywork etc.

Marchesi’s party colleague Kobus Marais, whose brief it is to keep a watch on defence and military veterans matters, was told by the Minister more than 11 000 vehicles were repaired by Cubans in the six years Project Thusano has been running.

Cost-wise Mapisa-Nqakula told him just over R9.5 million will be paid to Cuba this year for the contract. This is considerably down on spend of over R274 million in 2018, R252 million last year and R170 million plus in 2017. The Cubans on detached duty to the SANDF have VIP protectors whose accommodation and food costs for the six years to date of Thusano has been R2.6 million.

The Cuban contingent has, in addition to its numerous taskings across three services, also done skills transfer. This, according to the Ministerial reply, saw 1 386 SANDF personnel forming part of the project’s skills transfer component with 319 of them receiving “official qualifications” and 483 transferred back to and working at their original units.

Previously it was discussed in Parliament and payments were made to whom?

Democratic Alliance (DA) parliamentarian Nomsa Tarabella Marchesi was told Cuban expertise is now used in the SA Air Force (SAAF), SA Military Health Service (SAMHS) as well as the SA Army. The landward service was the first SANDF component to employ Cuban skills six years ago when mechanics and technicians from the Caribbean Island nation’s military arrived in South Africa to refurbish and repair Samil and similar vehicles, apparently because the national defence force was charged excessively by local companies for doing the work and there was insufficient in-house capacity. While doing refurbishing and repairs the Cubans would also mentor and provide mechanic-type training to SA Army technical personnel.

Pretoria – Millions of rands worth of military vehicles were destroyed in a fire at a vehicle depot at Wallmannstal north of Pretoria last week when safety fires “went wrong” and a military fire truck broke down, Netwerk24 reported.

An internal investigation into the incident is being conducted.

The fire broke out despite repeated warnings that the grass surrounding the more than 2 000 vehicles was too long and posed a fire danger.

Exactly two years ago 104 vehicles were also destroyed in a fire due to long grass near another vehicle parked behind the Kgosi Mapuru II prison in Pretoria.

According to Mgobozi it’s not possible to determine the value of the damage before the investigation is completed.

At an average market value of R80 000 for an old Samil truck, the damage could amount to R6.7 million.

The vehicle park and nearby shed also provide storage for bombs that, according to informed sources, are very old and potentially highly unstable when exposed to extreme temperatures.

The bombs have apparently been kept under canvas in the shed for years without anyone ensuring that it’s made harmless or destroyed.

Without decent fire trucks, Wednesday’s fire had spread so fast that help had to be summoned from Hammanskraal. By Thursday the scene had started smouldering again.   According to Mgobozi the unit’s fire department was busy with safety fires when a sudden change in the weather made the flames spread, he said.

The old and broken vehicles, trucks, mobile kitchens and other equipment are being stored at the park after the SANDF ended its agreement with Krygkor to sell redundant equipment on auction two years ago.
https://www.news24.com/news24/southafrica/news/fire-destroys-83-military-vehicles-20170917

More than 200 military vehicles, including Nyalas, trailers and other military equipment, were burnt to ashes after a fire broke out at the military’s Wallmansthal vehicle depot, north of Pretoria.   According to the Sinoville Firefighting Association, which was first on the scene, the fire broke out just before 7pm on 16 September 2021.

“An officer from the army base called to say the base was on fire, and the section where they park vehicles, and they needed our assistance very urgently. We immediately dispatched members with a fire engine, and they arrived there at about 7.15pm,” said association chairperson JP Botha.    The team was later joined by the Apies River rural fire protection association, and they battled the blaze until about 1am.

“This is a tragedy if you look at how many vehicles were burnt. We brought the fire under control in the early hours of today [Friday] but we have left the vehicles to burn until they burn out. They are not posing any threat to human life.”

“We had an inspection there for our internal report, and the army is busy counting. It’s a disaster. A lot of equipment was damaged in this fire” he said.

It is suspected a fire that broke out near an informal settlement and spread to the army base, resulting in some vehicles catching fire. The wind was blowing at about 31km/h and the fire danger index was 76, which is considered very dangerous. No buildings were burnt and there was no danger to human life.     This is not the first time there has been a significant fire at the base.

Previously reported that a board of inquiry was instituted to investigate the cause of the fire. The military said at the time the vehicles were unused and kept for spares.

Several hundred decommissioned and retired South African National Defence Force (SANDF) vehicles were destroyed in a fire at the Wallmansthal depot north of Pretoria during the night of 16 September.

The fire started on Thursday evening and was only extinguished in the early hours of Friday morning. During that time, several hundred vehicles were destroyed, including trucks, trailers and other equipment.

The Sinoville Firefighting Association, which was first on the scene, told TimesLive that the Wallmansthal base had requested assistance, and the Association duly dispatched members with a fire engine. They were joined by Apies River rural fire protection association and later Tswhane firefighters.

“This is a tragedy if you look at how many vehicles were burnt. We brought the fire under control in the early hours of today [Friday] but we have left the vehicles to burn until they burn out. They are not posing any threat to human life,” association chairperson JP Botha.    It is understood that hot, dry and windy conditions spread a fire that had broken out near an informal settlement close by. Many of the vehicles stored in the open were surrounded by dry grass and brush and caught fire quickly due to strong wings.

Jacaranda FM reported SANDF spokesperson Mafi Mgobozi as saying that most of the vehicles which caught fire were not in use or were beyond repair. “Most of those vehicles are scrap vehicles,” he said.

This is not the first time vehicles have been destroyed by fire at Wallmansthal. In September 2017, a runaway fire burnt out 83 vehicles, mostly Samil trucks apparently unusable and awaiting disposal. Fire breaks were being burnt along the base perimeter fence when the weather changed and the fire quickly spread.

The sprawling Wallmansthal base is home to one of the SANDF’s largest vehicle parks, holding both serviceable and unserviceable vehicles and equipment. In addition to Casspirs, Buffels, Mambas and Samils, redundant equipment including field kitchens, towed water tankers, portable shower units and Sappers’ equipment such as graders, tractor/loader/backhoes and front-end loaders are stored at Wallmannsthal pending disposal.

There are close to a thousand vehicles in preservation storage at Wallmansthal – these are kept indoors and include Ratel armoured vehicles, Casspirs, Mambas, G6s, Zebras, Skimmels and Rooikats.

More than 2 000 unserviceable vehicles are in open storage, with some awaiting disposal and others awaiting cannibalisation or return to service.