The first ‘real’ tourists were welcomed to the park in 1926. Before that, in 1922, there were railway tours that passed through the reserve – the trains would stop for one day in the park to allow passengers to view the wildlife. 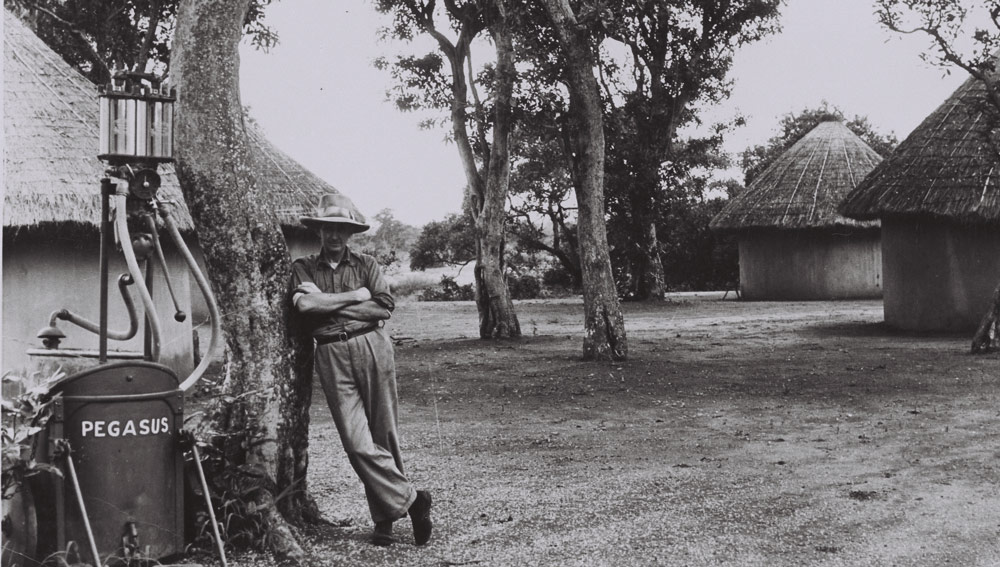 It was a few years before the South African (Boer) War, in the late 1800s when President Paul Kruger (in office 1883 – 1900) was alerted to the fact that a rapid extinction of various species of flora and fauna was taking place in South Africa. Unregulated hunting meant that wild animals were disappearing fast, and President Kruger had his eye on a piece of land he wanted to turn into a reserve.

In 1898, he managed to declare the area between the Sabie and Crocodile rivers a game sanctuary and restricted hunting zone – which he called the Government Game Reserve, subsequently renamed to the Sabi Game Reserve. This was a time of great upheaval, during which President Kruger declared war on the British Empire, a war which ended in 1902.

Hunting was forbidden, but wildlife was still scattered and skittish. Staff were appointed, and James Stevenson-Hamilton became the first park warden. He became renowned for his dedication to conservation and famously disapproved of the tarring of the roads in the reserve, believing that people would then drive faster, resulting in the unnecessary deaths of wild animals. This man could see well into the future!

It soon became clear that the only way to secure the future of wildlife in the reserve was to establish it as a national park under the South African Union Government. Unfortunately, this idea was short-lived, as in 1914 World War I broke out, resulting in many of the staff leaving for active service. The poor state of the economy meant that most departing staff were not replaced.

With the lack of staff, the reserve suffered from rampant poaching. There was a single police sergeant at Komatipoort, to the south of the reserve, whose job it was to singlehandedly defend that section of the park. Also, soldiers returning home from the war hoped to be given the land for sheep farming.

At the time, it looked like the reserve would never recover, but by 1919 things started to improve. The staff numbers had increased again, and the discussion once again arose about the declaration of a national park.

Finally, on 31 May 1926, the National Parks Act was drawn up and passed by the Houses of Parliament, and the Kruger National Park was officially established.

Tourists in Kruger during the early days faced unique challenges, including the almost total lack of roads. Before 1928, there were only service roads, capable of low-volume traffic from Gravelotte and Acornhoek to the Portuguese border (modern-day border of Mozambique). The roads were not capable of carrying heavy tourist traffic.

In 1922, South African Railways offered tours via trains, and for a brief moment in history, air service was introduced, and then promptly cancelled. There were seven planes, of which six were legal, and they seated just two or three passengers at a time.

The 344,000 ha Greater Kruger is one of conservation’s biggest success stories, in that land outside the national park is incorporated into an over-riding management strategy. Additional parcels of land (privately and community-owned) on the western border have been incorporated into the core protected area over the years, by the signing of management accords and the removal of fences. This ongoing process involves complex negotiations and varied land-use requirements and expectations, including photographic tourism rights and trophy hunting in some areas (there is no trophy hunting in the national park itself).

Founded in 1963, the 23,000 ha Manyeleti Game Reserve is sandwiched between the Kruger, Sabi Sand, and Timbavati, with no fences in-between. It also has an interesting and unique history. During the Apartheid years, it was the only reserve that welcomed people of colour, and after claiming back the land, the local Mnisi people now own and manage the reserve. Land use is exclusively for photographic tourism.

The 42,000 ha Letaba Ranch Game Reserve, just north of the mining town of Phalaborwa, shares an unfenced border with the Kruger National Park. The reserve is owned by the local Mthimkhulu community and has historically been used mainly for trophy hunting. Future plans include hunting and eco-tourism, but current operations appear to be in a state of turmoil.

Makuya Nature Reserve is a 16,000 ha game reserve near the Pafuri gate in the far north of the Kruger, and also shares an unfenced border with the Kruger National Park. The reserve is owned by the Makuya, Mutele, and Mphaphuli communities and is used for both trophy hunting and photographic tourism purposes.

GLTP is a 3,8 million-hectare peace park, created on 10 November 2010, that straddles the international borders of three countries, with some of the best wildlife areas in southern Africa being managed as an integrated unit.

This transfrontier park links the Greater Kruger National Park in South Africa to Mozambique’s Limpopo National Park (1 million ha), and Zimbabwe’s Gonarezhou National Park (500,000 ha). Fences between the parks have started to come down, allowing the animals to take up their old migratory routes that were previously blocked by political boundaries. Translocations of various antelope species and entire elephant breeding herds have been undertaken, to speed up the process.

The TFCA is a strategy to expand the GLTP to an area of approximately 10 million hectares, by incorporating several more national parks, such as Mozambique’s Zinave National Park (400,000 ha) and Banhine National Park (725,000 ha), plus large tracts of state and community-owned tracts of land in-between these parks.

The Kruger National Park is the foundation and role model for this growing and evolving conservation success story. For more about big-picture plans, read Kruger 10-year Management Plan. 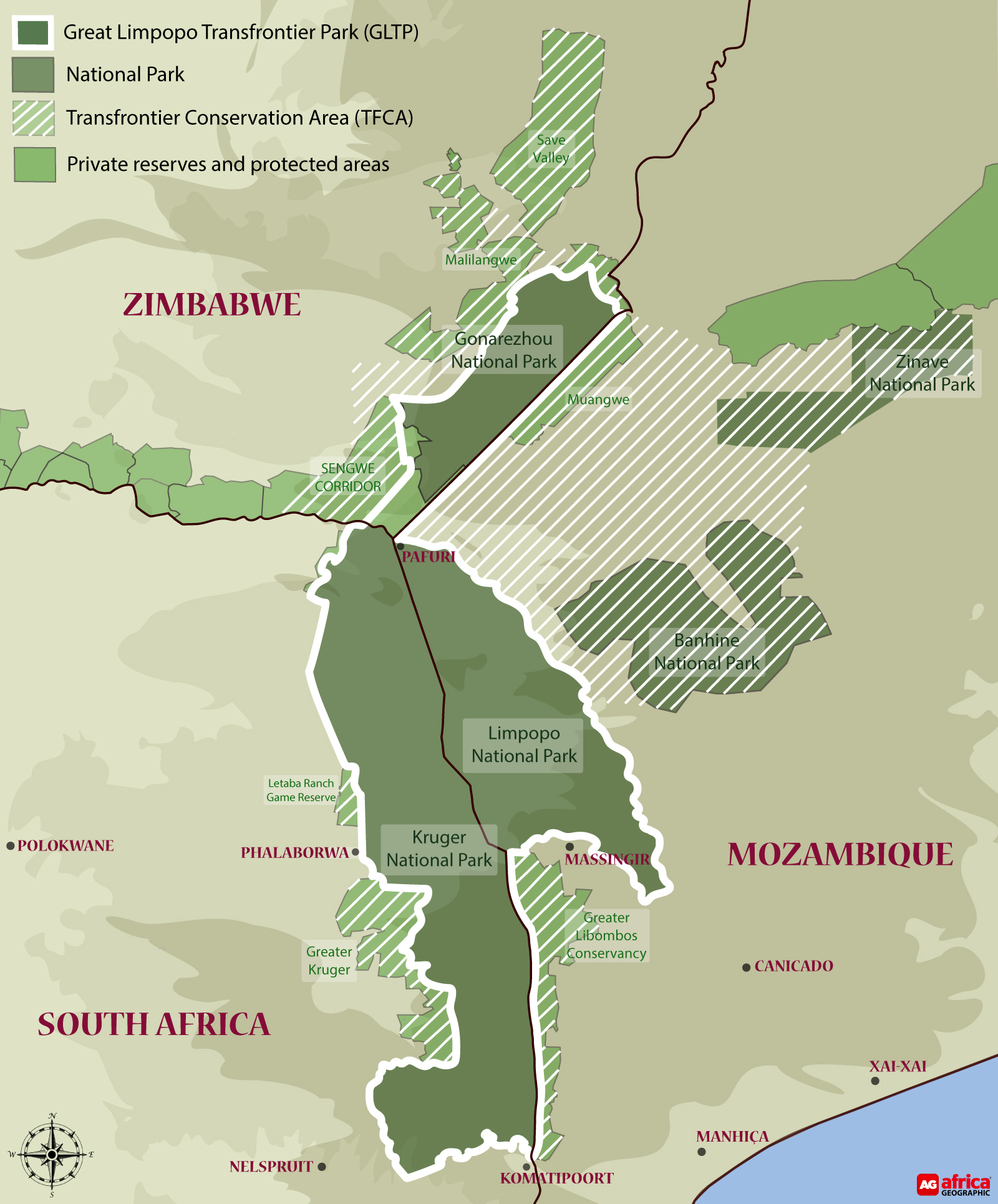 Before Kruger’s formalisation as a protected area, the area was home to people who mined, hunted, traded and lived their lives – as humans do.

The ruins of Thulamelaon the southern banks of the Luvuvhu River near Pafuri is one of the most significant archaeological finds in South Africa.

This ancient stone citadel reveals a thriving historical mountain kingdom that was occupied by 3,000 people who traded in gold and ivory between 1200 and 1600 AD. The prolific trading community, descendants of the Great Zimbabwe civilisation, were skilled goldsmiths who also traded in iron extracted and smelted from 200 local mines. After the Thulamela dynasty a Tsonga-speaking agricultural and fishing community, known as the Makuleke, settled in the area and thrived until they were forcibly removed to make way for the national park. 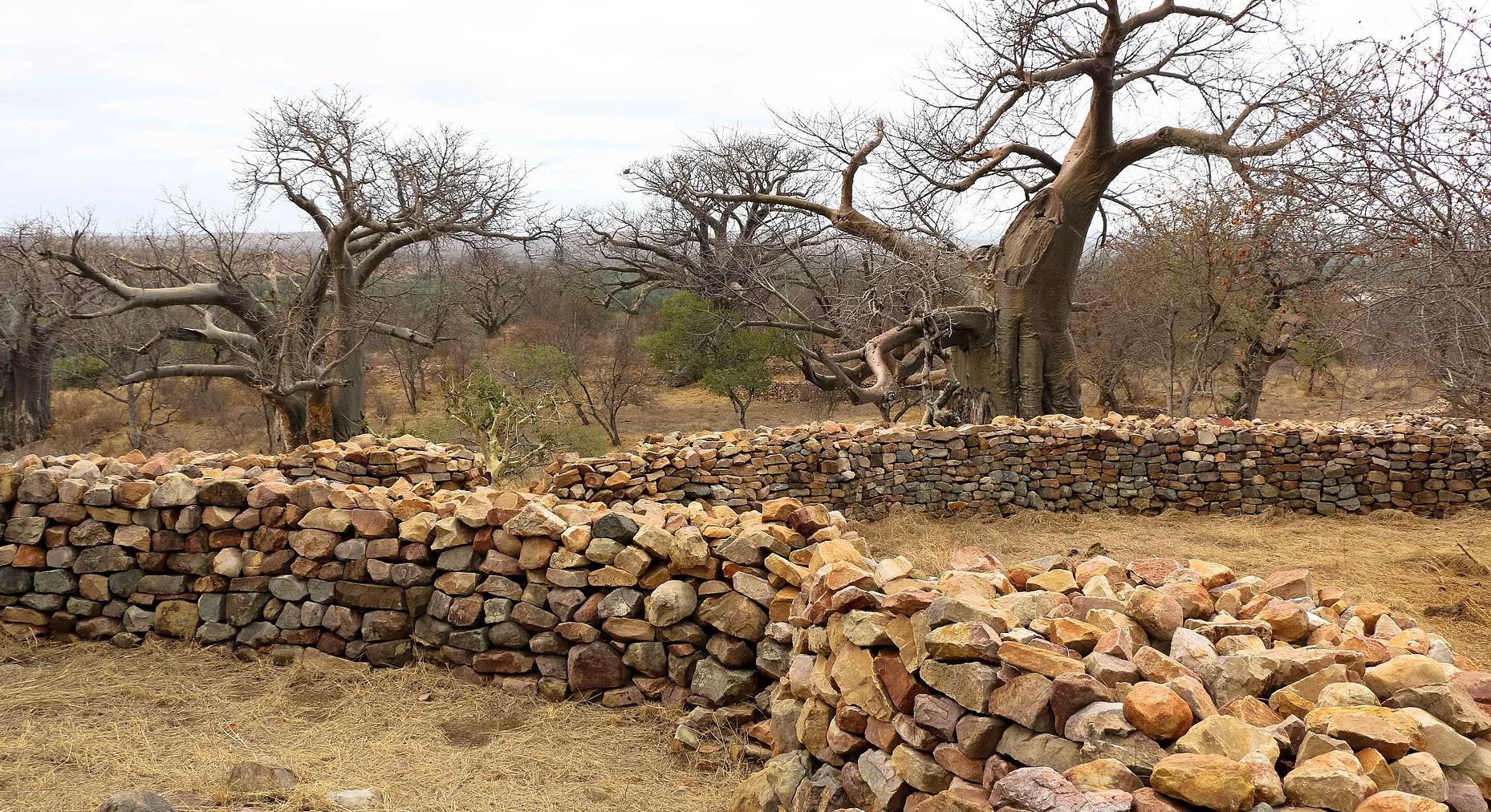 The transition to conservation status heralded a less pleasant part of Kruger’s history, when these indigenous people were removed from the area, and relocated elsewhere. In recognition of this, and in line with South Africa’s ongoing land restitution process, in 1998 the Makuleke area in the Kruger was returned to the ownership of the Tsonga people, who now earn concession royalties in return for that area remaining within the Kruger National Park. Other areas within and bordering the Greater Kruger are currently under some form of land claim, and the future will reveal the results of this process.

History and future of the Kruger