Nicknamed by the Tsonga people as “Skukuza”, which loosely translates to “The man that turns everything upside down or the man that sweeps clean”, James Stevenson-Hamilton was born in Dublin, Ireland in 1867.  Although well educated, James Stevenson-Hamilton decided to follow a career in the military and he stationed himself on the banks of the Crocodile River in South Africa before moving and settling at Skukuza which was known at the time as Sabi Bridge.

Statue of the founders of the Kruger National Park at Skukuza, Paul Kruger, Piet Grobler and James Stevenson-Hamilton.  – 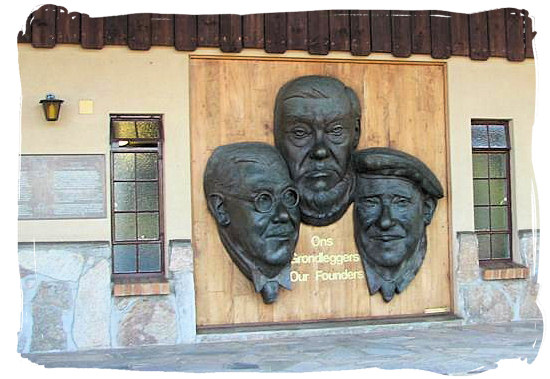 After signing a two year contract, Stevenson-Hamilton left for what was described back then as the “White Man’s Grave” with only a map of the area, oxen and wagon, provisions and ammunition.  The area of the Kruger National Park as we know it today, was uncharted back in the day and rife with malaria.  Since “game ranging” was a completely new term, Lagden gave James Stevenson-Hamilton free rein in the area with his only instruction being “Make yourself generally disagreeable and eliminate poaching.

James Stevenson-Hamilton believed that if there was no shooting of game in the area, the game would lose their fear of humans and come back to the area.  He made it his first order of business to announce to the locals, that no shooting would be permitted.  He moved from Crocodile Bridge to make his headquarters at Sabi Bridge.   Here he appointed two rangers, one being Harry Wolhuter, and with the aid to these two rangers they trained local rangers.  Many poachers were caught and soon the locals realised that they were serious about the no shooting rule.  They even caught and convicted senior policemen for poaching in the area.

James Stevenson-Hamilton not only patrolled the reserve to keep it safe from poaches, he also saw the need to thin out the lions and wild dogs.  He managed to convince companies in the vicinity of the Sabi Reserve to lend him land which eventually gave him a huge landscape, spread out in a remote corner in the Transvaal.   This new land extended the original 3 100 square kilometres to 36 000 square kilometres, creating what is today the Kruger National Park.  Wildlife could now roam safely from Crocodile Bridge to the Limpopo River.  Up to this point it was still known as a reserve but in 1912, Stevenson Hamilton presented his idea to nationalise the reserve and transform it to a national park.

After 44 years of service to the Kruger National Park, James Stevenson-Hamilton retired and settled in White River, where he passed away on the 10 December 1957 at the age of 90.

The Kruger National Park (KNP) is one of the largest and best-known national parks in Africa. It is famous for many reasons, chiefly, the abundance and variety of mega-fauna and flora is what makes it stand out from the plethora of other national parks. The KNP boasts 35 species of amphibians, 53 species of fishes, 118 species of reptiles, 148 species of mammals, 505 species of birds and 1990 species of plants. The sheer size of the park (19485km2), its latitudinal and altitudinal change from one end to the other and the varied underlying geology make for complex ecosystems in which this myriad of life interacts. In ecological terms: complexity breeds complexity, and diversity of species in an ecosystem is the yardstick by which we measure its health. In this regard, the park ranks extremely highly. It then seems fitting that the formation of the park was also a complex ordeal.

The Kruger National Park is named after the hugely admired (amongst his people) and equally conservative president of the Transvaal, Stephanus Johannes Paulus “Paul” Kruger. Popular belief has it that Paul Kruger was one of the forefathers of game conservation in South Africa and that he had intended to create reserves around the Boer republic but historical records show otherwise. In fact, the Boers under Paul Kruger’s tenure considered it their God-given right and civic duty to clear land for agriculture and civilisation. Their economy was based on hunting for hides, meat and ivory.

So how is it that South Africa’s first proclaimed national park and one of Africa’s flagship reserves, which was established in 1926, came to be named after Paul Kruger, who opposed a motion for tighter hunting controls in the Volksraad (Parliament) in 1884, and subsequently fled the country in 1900, towards the end of the Anglo-Boer war (Kruger died in Switzerland in 1904)

By the mid 1800’s the industrial revolution was in its mature stages and the natural environment was being transformed on a grand scale, especially in more developed countries. Charles Darwin was still discovering new species and working on his theory of evolution at this time.

In 1890, when a commercially minded farmer in the Free State named Williams suggested that a tract of land be protected as a ‘Wildkraal’ (enclosure or reserve for wildlife) so that English ‘sportsmen’ might rent this land for hunting, at a premium, it was met with heated debate.

After Pretoria was annexed by Lord Roberts’ army, the new administration, under Lord Milner discovered the minutes regarding the establishment of the “Wildkraal” and in October 1900 A. Glynn, a hunter and farmer from Lydenburg, was pronounced the first gamekeeper of the yet to be established “Sabie Game Reserve”. Glynn was unable to report for work because Boer Guerrilla units were still operating in the area. Next in line was Captain HF Francis, of the controversial Steinacker’s Horse outfit (a makeshift mercenary unit that fought for the British cause).

He was appointed “Game Inspector” but was killed in action about a month later. Next was WM Walker, who proved to be grossly unreliable and was subsequently dismissed. Finally, 34 year old, Major James Stevenson-Hamilton was appointed and remained at the helm until his retirement in 1946. Although he was the reserve’s third warden, he was its first on-the-ground caretaker. Stevenson-Hamilton went on to appoint the reserves first Game Ranger, the legendary Harry Wolhuter, who had also served in the infamous Steinacker’s Horse outfit.

Harry was declared officially dead three times in his life, twice during the Boer War having contracted malaria and then once after his famous mauling by a male lion. Once the reserve was a working reality, white farmers became increasingly vocal about the increasing number of predators in the reserve and thus the Travsvaal Game Protection Association (forerunner of the Wildlife Society) was established. Their objective was to protect the antelope (or royal game) from vermin such as lions, cheetahs, hyenas, leopards and wild dogs. As a result, these predators were exterminated en masse.

When the war broke out in Europe in 1914 most rangers signed up for service and the reserve was invaded by hunters, sheep grazers, cattle ranchers and mining prospectors. After armistice in 1918, it took the returning rangers many years to clear the park again. It was around this time that Stevenson-Hamilton decided that the game reserve should protect all game and in fact everything within its boundaries. There were many in opposition to this notion and he spent the following decade and a half fighting off the opposition.

The ‘Pact Government’ in 1923, with JBM Hertzorg as Prime Minister, promoted Afrikaner interests strongly. These were in contrast to British ideals, particularly on the conservation front. At the time, Stevenson-Hamilton had only two strong supporters in cabinet and needed a miracle get the largely Afrikaans public on board. It was on an innocuous trip to Komatipoort, when he mentioned his troubles to the hotel owner that his miracle was manifest.

The owner suggested that he name his would be park ‘Kruger’, as no Afrikaner politician would vote against it. Stevenson-Hamilton subsequently approached Piet Grobler, Minister of Lands, with the idea of extending the Sabie Game Reserve, conserving everything within its boundaries and renaming it, “Kruger National Park”. Piet Grobler, who was a great grandnephew of President Paul Kruger, saw fit to table the bill in parliament and presented it as a realisation of President Kruger’s vision. And so, on the 31st of May, 1926, the Kruger National Park was established and the first board of South African National Parks was appointed.

Hamilton was born in 1867 in Scotland. In South Africa, he served as an officer in the 6th Dragoon Guards.

With very little support and equipment, Hamilton started his office in the Kruger National Park. He was aware that with a few horses and only a few employees, it was almost impossible to monitor the entire reserve.

But with his great zest and strong will, he expanded the park in 1924. The Minister Piet Grobler officially declared the Kruger National Park as a protected area. This was James Steveson Hamilton’s greatest success!