The oldest section of the buildings of Parliament, which today houses the National Council of Provinces, was completed in 1885. The original design was by Charles FREEMAN. Various financial and building problems were experienced and the project was re-allocated to the Scottish architect Henry GREAVES, who had just joined the DEPARTMENT OF THE PUBLIC WORKS. In the end the building took 10 years to complete, from 1875 to 1885, and cost £220 000 – more than five times the initial budget of £40 000.

This noble South African parliament in Cape Town, standing in its own grounds, at the entrance to the beautiful avenue of oak trees at the top of Adderley Street, is a fitting home for the Legislative Council and Assembly of the Cape Colony.

The chamber was used again from 1983 to 1994 for plenary sittings of the House of Representatives, comprising coloured members who were part of the tri-cameral Parliament established in terms of the 1983 Constitution.  In 1994 the Senate was re-established as one of the two Houses of the first democratic Parliament of South Africa. In 1997, the National Council of Provinces replaced the Senate. 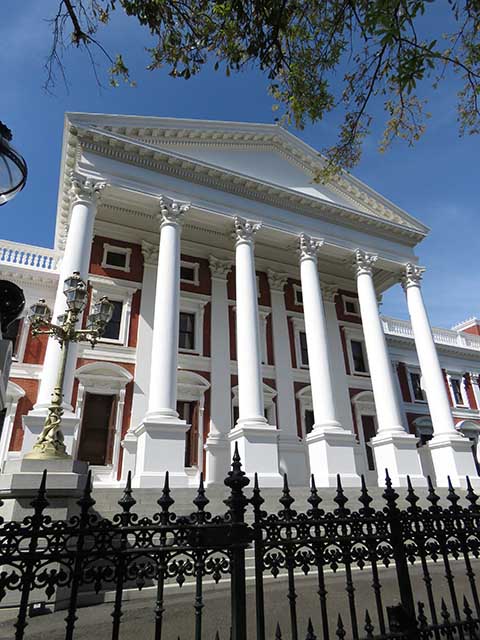 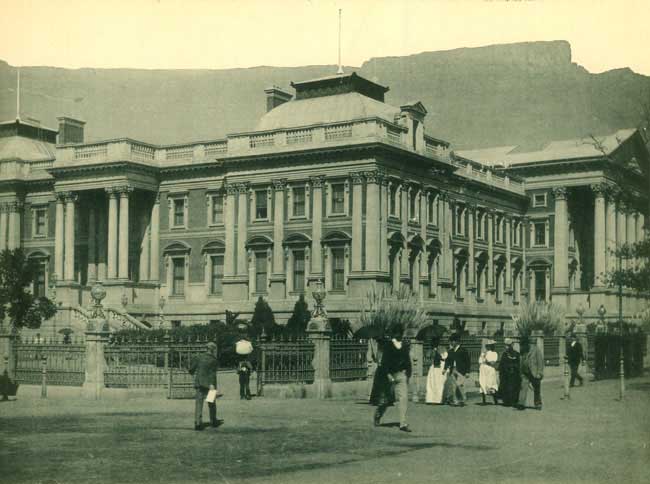 Greaves was born in Edinburgh. He probably trained in Scotland although it is is possible that he was articled to John WHICHCORD (1823-1885) in London where he appears to have worked as a clerk of works and to have qualified as a district surveyor; he was in Whichcord’s office from 1865 to 1875 and qualified as a district surveyor at the age of twenty nine, coming to South Africa seven years later. It is possible that his appointment was made at Whichcord’s suggestion in view of Whichcord’s subsequent work in relation to the Cape Houses of Parliament, he is alleged to have re-designed the elevation and acted as consultant architect for the building (Radford 1979:116).

In 1876 Greaves was chosen from fifty applicants by the Crown Agents for the Colonies as architect for the new Houses of Parliament in Cape Town, a commission which had been won in 1874 by Charles FREEMAN, dismissed for incompetence in early 1876.

In Greaves’s ARIBA nomination papers (1884) he described why he had been appointed to the Cape post and what his position was in the Colony:    ‘I left to accept appointment under the Government in the Cape to carry out the Parliament House there. In consequence of these works having been abandoned I have accepted the appointment I now hold in that colony. I am on the fixed establishment under Government, consequently my appointment is a permanent one. I have also been in practice on my own account in the City of London for four years. I am 39 years of age’ (ARIBA nom papers 1884).

Having been appointed to carry out the Houses of Parliament, Greaves arrived in Cape Town before the altercation over Freeman’s plans was resolved. His participation had to await a decision over the matter. Work had stopped after the foundations for the Houses of Parliament had been laid. Greaves waited. With the re-organisation of the Department of the Colonial Engineer in 1879, he accepted appointment to the newly created post of Chief Deputy Inspector to the Chief Inspector of Public Works, a permanent post.     Radford (1979:116) remarks that Greaves seems to have been engaged on surveying the Public Buildings of Cape Town and District prior to his appointment in 1879 as Chief Architectural Assistant to the Chief Inspector of Public Works. When plans for the Houses of Parliament finally went forward late in 1879, he worked on the design of new Parliament Buildings with John Whichcord as consultant (Radford 1979:116). How much the 1885 building was influenced by Freeman’s design remains a question, Radford suggests that Freeman’s plans were closely followed, the foundations after all had already be laid according to these.

As the new architect in charge of the work, Greaves supervised the professional team from the PUBLIC WORKS DEPARTMENT, and was put in charge of detailing. Contracts for the building were eventually signed in February 1882.

During 1883 the builder, John Bull, went bankrupt: the PWD completed the building, under the supervision of Greaves, in 1885. The buildings have frequently been criticised. In 1926 for instance, the editor of the Architect, Builder and Engineer (Apr 1926:1) commented ‘the Houses of Parliament … are but a pot-pourri of wretched Victorian taste and stylistic affectation’.

Greaves continued to work in Cape Town and became a figure of some authority whose judgement was often called upon in architectural matters. In this way he assessed the South African Museum competition in 1892 and the Cape Town city hall competition in 1894: ‘He was in charge of all the architectural work executed by the Cape PWD and he can be credited with most of the large public buildings produced by the department’ Radford 1979:116), including works such as the Cape lighthouses, the Magistrate’s Court, Church Square (1891); the General Post Office in Adderley St (completed 1897) and the Produce and Feather Markets in Cape Town (1898). He was the supervising architect for the Valkenberg Mental Asylum on behalf of Sydney MITCHELL. Greaves retired in 1900 and returned to England around this date, dying shortly afterwards. He was succeeded at the Cape in 1900 by AG HOWARD.

Blankes word uit alles UITGESLUIT.
“ONE PLANS” – a. The development of One Plans ….    #bolshevism

There are 8840 traditional leaders at the moment – living on Trustland or CPAs (old homelands and landclaims).   Therefore, it is not the  “Government” that pay the bills, but the “taxpayers”.     Refer to the “constitution” as well.