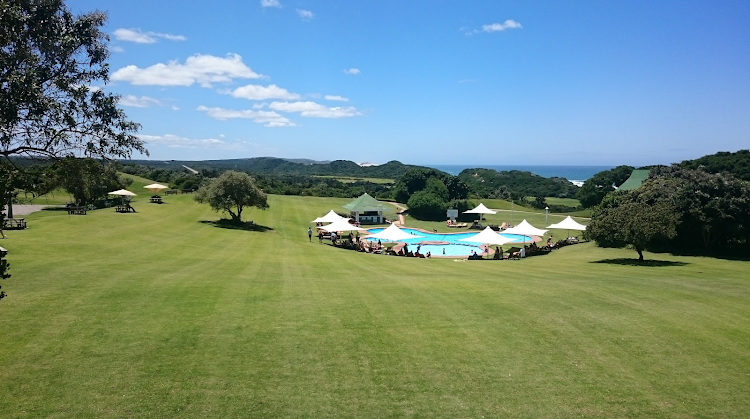 The Eastern Cape public works department faces a bill of  R1.56m  for quarantining people, with a large chunk used to house and feed those entering the province from the Western Cape — but not everyone is playing ball, with some using it as a chance to live it up at the beach.

The quarantine figure comes just seven weeks since the first reported case of Covid-19 in the Eastern Cape and is likely to increase dramatically as the virus spreads.

WHO DECIDED ON THIS QUARANTINE- “PAID HOLIDAY”?

And for one group of people, Covid-19 has presented the opportunity to breathe life into the proverb.    We are talking here about the 200 farmworkers who have been forced into quarantine in the Eastern Cape.   While quarantined, they have been enjoying the beach at Mpekweni Resort between Port Alfred and East London, forcing officials to call in police to control them.

Given the Western Cape’s high number of confirmed Covid-19 cases, it was decided to quarantine them here, at resorts and hotels around the province — at a cost of nearly R1m. Up until that point, the cost was sitting at R600,000.    “Our bill spiked when farmworkers from Ceres in the Western Cape entered the province, some with illegal permits,” public works department head Thandolwethu Manda told HeraldLIVE.

“Because of the high number of cases in the Western Cape, we couldn’t as the Eastern Cape government simply let them go without having quarantined them and ensuring everyone’s safety.     “We started seeing a spike in our budget during the past week and we’ve now spent a total of R1.6m.”

That’s R1.6m from the Eastern Cape’s purse.   And, let’s face it, the province has not been doing the best job in handling Covid-19: why else would health minister Dr Zweli Mkhize see it fit to send in the cavalry?

While we understand the need now to contain the spread after the farmworkers’ arrival in the province, perhaps better measures should have been in place long before they even left the Western Cape.     In fact, taking into consideration the stops there would have been along their trek, exposing themselves and others to infection, should they even have left at all?

These are unusual times and perhaps new regulations should be put in place to restrict the movement of large swarms of people across provincial borders, in particular those who, as in this case, seem to be travelling together in groups from specific areas — especially areas known to be hotspots for the virus. 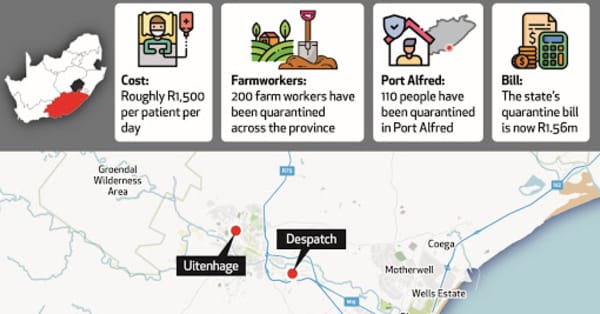 Tensions over people coming into the Eastern Cape from the Western Cape came to a head at the Mpekweni Beach Resort near Port Alfred this week when police had to be called to reprimand an “unruly” group placed in quarantine at the popular holiday destination.     The movement of people from the Western Cape, current epicentre of the coronavirus in SA, has raised fears among Eastern Cape residents since the lockdown began on March 26.

On Wednesday, 48 travellers in eight taxis were caught at a roadblock in Elliotdale, where they refused to be screened.

The Eastern Cape government then decided to place them in quarantine at Mpekweni, a provincial quarantine site.

Another group of 64 people was quarantined at Fish River, which has also been identified as a quarantine site.     According to an employee at Mpekweni, it was not long after the group’s arrival that chaos erupted.

“Police had to be called in to force unruly people who were not even tested for Covid-19 to go back to their allocated rooms,” the woman, who spoke on condition of anonymity for fear of losing her job, told DispatchLIVE.

“ “After we screened them, we told them about how they were expected to behave, but they never listened to us. They were roaming around and making a noise instead.”    At their wits’ end, hotel management then decided to call police for help, she said.    “It was like they didn’t understand why they were here. Police eventually came and addressed them and that’s when they went into their rooms,” the source said.

Another source, who lives in Mazizini village near Mpekweni, said: “People in our village who work at Mpekweni told us what happened. But when we went to our traditional leaders they knew nothing about the resort being turned into a quarantine site.    “Hence we are mobilising all villages in this area go to Mpekweni. We are fearing for our safety now. The worst thing is that no-one told us anything,” she said.    Mpekweni CEO Colin Whitehead said on Friday: “I can’t divulge any information about my guests.”

The provincial transport department has had its hands full monitoring taxis ferrying passengers — many originally from the Eastern Cape — from Cape Town townships and Cape farmlands.

Often both taxi operators and their passengers do not have the requisite permits or have procured fraudulent permits.    Transport, safety and liaison department spokesperson Unathi Binqose confirmed that 48 people were stopped at the Elliotdale roadblock, having come through Aberdeen via Tsitsikamma.   Binqose said the “Western Cape remains a headache” as there continued to be an influx of minibus taxis from that province.

“It was a convoy of eight taxis and that raised the alarm for our provincial traffic officers. We commend them for stopping them. It was also discovered that their permits were questionable.   “They may have used the rural routes that are not always managed, but we are keeping an eye on that,” Binqose said.

He said the transport department had resorted to collaborating with their counterparts in the Western Cape to find a solution to this problem.    “We want to catch people before they reach Aberdeen. The majority of these cases that we’ve had to deal with are people who are travelling from townships in Cape Town.    “How they pass from district to district within the Western Cape only for them to be caught in Aberdeen is puzzling. That’s why premier Oscar Mabuyane has met with his Western Cape counterpart Alan Winde.”

Winde admitted to DispatchLIVE there were challenges in monitoring the movement of people in his province, but he said those people were mostly seasonal workers who were now out of work on Western Cape farms.   “They are in the agricultural sector, but we also have people moving illegally, fraudulently trying to work the system,” Winde said.      He confirmed meeting Mabuyane on Tuesday, along with both of the provinces’ police commissioners and the respective transport MECs.

“We are going to do joint police operations between the provinces where we manage the control of movement,” Winde said.    He had  also instructed Western Cape transport MEC Bonginkosi Madikizela to convene a meet with taxi associations as well as funeral undertakers to ensure they did not transgress  the level four lockdown regulations.   “We have new set of protocols and there’s proper testing before people move between provinces so that we can minimise the movement of Covid-19.

“When they [seasonal farm workers] finish picking apples then those workers want to go home. They’ve got their money now and they want to go home to their families.”   Winde said he had reached an agreement with the agricultural sector in that regard to set up protocols.   “You can’t just go home if you are infected with the virus. We have to test you first and once you are cleared then the transport will be arranged to go home.”

In a statement, Mabuyane confirmed joint law enforcement teams in the province would “intensify law enforcement at points of entry into the province”.    Mabuyane said special operations at the Tsitsikamma and Aberdeen entry points had already begun.   “This move is aimed at eradicating use of fake permits following arrests of individuals who were producing and selling fake permits to passengers,” Mabuyane said.   “We have also picked up passengers claiming to be from the same family attending the same funeral but they don’t know each other. In some instances, passengers use one permit for different funerals to take place at the same time in different villages.”

Between March 27 and April 30,  157 vehicles from the Western Cape were turned away by provincial law enforcement agencies at points of entry. They had  no proper travelling permits.

ANC provincial task team and OR Tambo convener Mawande Ndakisa said the Western Cape  government was “folding its arms” when it came to ensuring lockdown regulations were enforced.