On Twitter – by   Srini Naidoo
Here’s an affidavit submitted to the Commission of Inquiry into State Capture deposed to by Adriaan Rudolph Fondse, regarding the theft of 178000 metric tons of GOLD from the Reserve Bank  . Submitted on  6 February 2020, all 219 pages of it. 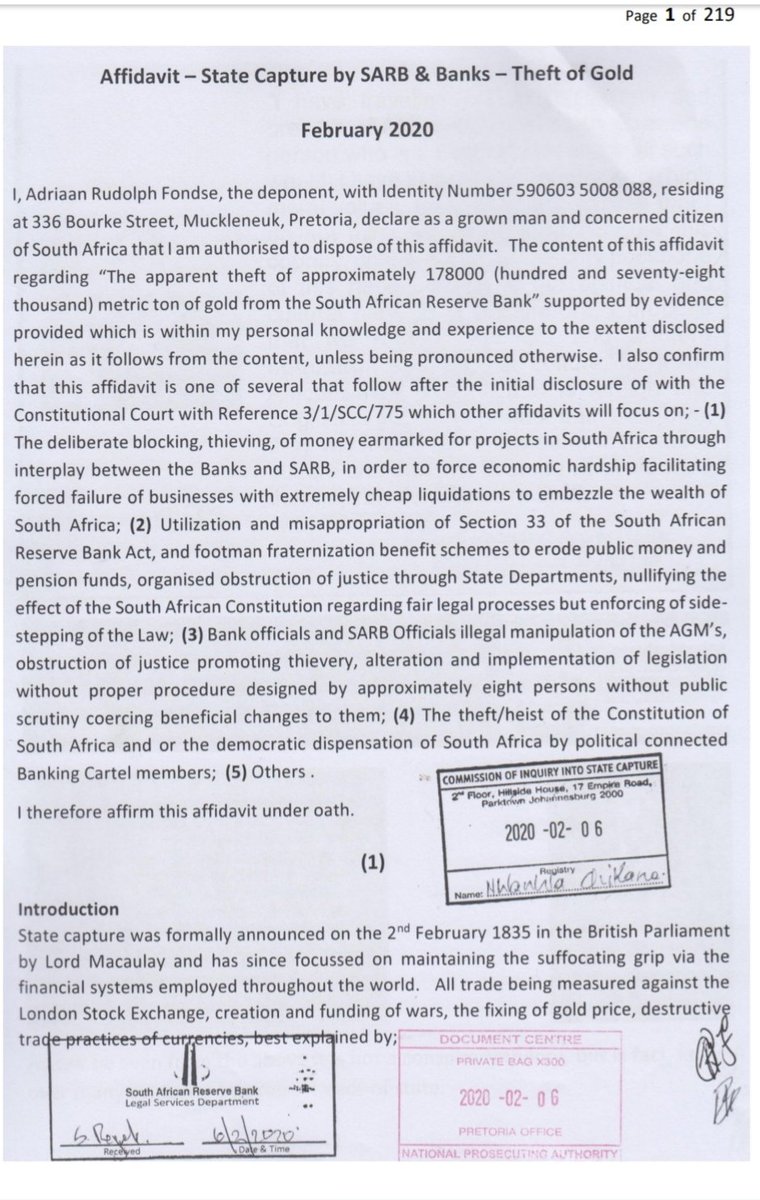 *
Annual Economic Report – 1990
P35
The real effective exchange rate of the rand declined, on average, by 5,3 per cent from 1988 to 1989, mainly in sympathy with the decline in the nominal effective exchange rate. However, the average real effective exchange rate then appreciated again by a similar percentage in the first six months of 1990 vis-a-vis its average leve: in 1989, as a reflection of the relative stability of the nominal exchange rate during this period in the face of sustained large differences between the South African inflation rates and inflation in the country’s principal international trading partners.
By 6 February 1990 the financial rand had firmed to R3,13 per dollar and to a discount .against the commercial rand of 19,2 per cent. Changing assessments of the socio-political situation and the continuation of violence in certain parts of the country subsequently caused the financial rand to return to levels of around R4,00 to the dollar and to its earlier discount of more
than 30 per cent.
*
P44 The privatisation of Iscor and the listing of the Iscor share issue on the Johannesburg Stock Exchange on 8 November 1989 resulted in a transfer of more than R2,9 billion to the Exchequer. This caused government deposits with the Reserve Bank to rise briefly to a peak amount of R13,5 billion on 27 November. Countervailing action by the Reserve Bank (operating partly through the Corporation for Public Deposits and the Public Investment Commissioners) for mitigating the potential shock effect of this transfer on money market conditions included the purchase of R1 500 million in promissory notes issued by the Land Bank, R88 million of project bills issued by Eskom, and R15 million of “cycle bills” issued by the South African Transport Services. All these bills had matured by mid-February 1990.
The amount of 91-day Treasury bills offered at the weekly tender was reduced from R1 00 million on 28 July 1989 to nil on 4 August 1989. The tender was resumed on 11 August. The amount of bills on offer was increased gradually again from R20 million on 11 August 1989 to R100 million from 15 June 1990.