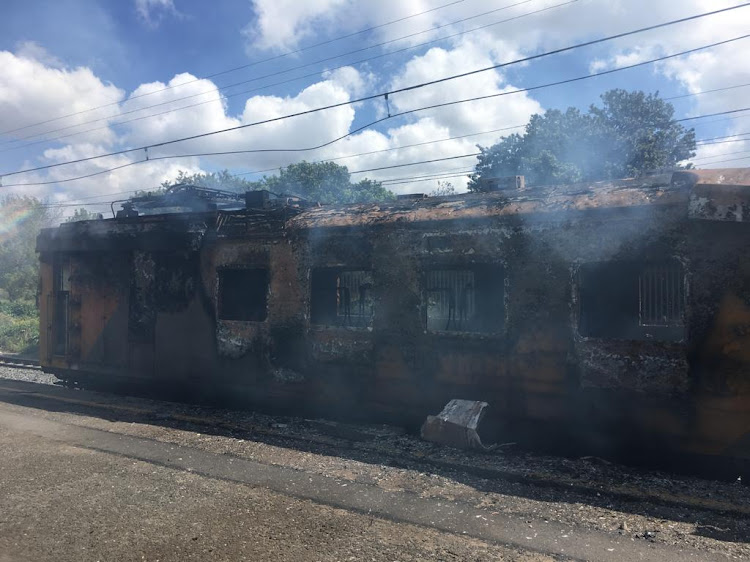 Like before, it is now more .. 2019 – Twenty-four train carriages have been burnt at a railway station in Bloemfontein, causing damage worth an estimated R4 million.    On Saturday at about 2:30pm, a Prasa employee indicated that he saw smoke from the carriages parked on the rails next to the Bloemfontein Railway Station. On further inspection he noticed that a number of train carriages were on fire.

“No cameras and no securities nearby.  Inside information. ”

The cause of the fire is under investigation but it has been determined that there was no electricity or fuel in the carriages.   Meanwhile, a case of arson has been registered for further investigation.

CAPE TOWN – It’s still unclear what caused a train fire at the Glencairn station in the Southern Peninsula.   The blaze broke out on Monday afternoon while the train was en route from Simon’s Town to Cape Town.   One motorised locomotive and two carriages were severely damaged, while a third carriage was slightly damaged.

“Two train carriages, part of train number 0182 en route from Simon’s Town to Cape Town caught alight. There were no injuries,” said the spokesperson for Metrorail in the Western Cape Riana Scott.   About three weeks ago, Metrorail confirmed 54 trains were running on the network.   The operator was hoping to have 60 within the next few weeks.

Scott said after the recent train fire, they were now running on 49 trains; 88 are needed for the rail network to run efficiently in Cape Town.

A reward of R100,000 has been offered for any information that could help an investigation into a train fire.   Authorities are looking for at least four suspects who torched 18 carriages at Cape Town station last week.   This latest arson attack has cost rail authorities R61 million.    Apart from the financial setback, the impact on services is immense.   Metrorail’s Riana Scott said several platforms remain closed days after the fire.
https://ewn.co.za/2019/12/02/reward-up-for-grabs-for-info-on-latest-ct-train-fire

Cape Town CBD was covered in smoke after two trains were set alight at the Cape Town railway station on Sunday afternoon.   At 15:51 on Sunday, the City of Cape Town’s Fire and Rescue Services received a call from someone reporting that a train was alight at the station.    Three fire engines, one water tanker, a rescue vehicle and 19 staff were dispatched to investigate the scene and tackle the blaze.    “Upon arrival, the Officer in Charge discovered two trains with five carriages each alight on Platform 12,” said the City’s Fire and Rescue spokesperson Jermaine Carelse.

The cause of the fire is unknown and no injuries have been reported.

Two weeks ago, President Cyril Ramaphosa unveiled two new trains at Cape Town station where he was briefed on Prasa’s efforts to improve commuter services and to stimulate economic activity and industrialisation through its modernisation programme.

The DA leader, Zille worked for OSF.SA (George Soros) since 1979 with the Black Sash and since 1993 for OSF.SA .    Now she (as always) “complained”, what they have asked for  *bolshevism and communism to takes over in 1994.

ALSO the Western Cape is part of South Africa and under national legislations.   All provinces fall under the “Constitution and ANC”.

What about all the farm attacks and killings, the whites that have been killed even before 1990, the Indians, Coloureds – Khoi san and Blacks that have been attacked and killed.

What about the bribes, crime and corruption since 1994?

Why do your party supported the killing of whites in South Africa, Zille is and was part of Black Economic Empowerment – B-BBEE and EE, as well as expropriation.. ..  who took part in the Codesa Constitution, the so-called liberal and classical liberals democracy.   The DP was there, later became the DA (with the old NP members) – others were there and part of the Dakar decision to take over the country to make it as is.

Only two people have been arrested for arson attacks on Cape Town trains in the past decade‚ and no one has been convicted.   Western Cape Premier Helen Zille said the information — provided by the police to community safety MEC Dan Plato — was “wholly unacceptable”.

A spate of arson attacks this year has left Metrorail with less than half the number of trains it needs to run its Cape Town commuter service.   The number of passengers has declined by 40% in three years‚ and Zille said this had a direct effect on Cape Town’s road congestion — the worst in the country.

The premier said she wanted an urgent meeting with the provincial police commissioner‚ Lieutenant-General Khombinkosi Jula‚ to find out what the police were doing to tackle the arson attacks.    The negligible arrest and conviction rate reflected a dysfunctional criminal justice system‚ she said.

“Train burning is economic sabotage on a grand scale. There needs to be sufficient urgency and expertise brought to bear on investigating‚ arresting‚ charging and convicting those responsible.   “It is wholly unacceptable that not a single person has been held accountable for these brazen attacks‚ many of which are initiated in broad daylight and in busy carriages. The question must be asked: why?”

The provincial government has contributed R16-million to a year-long project with Metrorail and the City of Cape Town to set up and run a team of 100 law enforcement officers to protect rail commuters and infrastructure. It has also offered a R100‚000 reward for the conviction of arsonists.

Zille said: “The sabotaging of people’s daily commuting system is a direct attack on freedom of movement and has serious knock-on effects for the Western Cape economy and productivity. The organised criminal elements behind these attacks must be exposed.”

The B-BBEE Commission was established in terms of Section 13B of the amended B-BBEE Act No 46 of 2013. The Commission’s mandate, amongst others, is to supervise and encourage adherence to the B-BBEE Act (and EE) …
The other side – Die ander sy

Vossloh España
The 70 new locomotives were meant to pull carriages full of people and goods around South Africa. The billions of rands spent on them were part of a plan by the Passenger Rail Agency of South Africa (Prasa) to modernise its fleet…
Prasa – scandal

A preliminary investigation into Thursday’s Elubana coal train derailment that saw the closure the export line has been attributed to sabotage. This is according to Transnet Freight Rail.
Terrorisme en sabotasie