29 December 2019 – DA federal council chairperson Helen Zille has once again caused a stir on Twitter – this time for posting a cartoon, by a cartoonist who goes by the name “Jerm”, about land, rape and race generalisations.      The name “Helen” was trending at number two on Twitter for most of Monday morning, with thousands having tweeted on the subject as of noon.  According to Zille, the cartoon “exposes the lunacy of blaming everyone, on the basis of their race, for the crimes of others”. 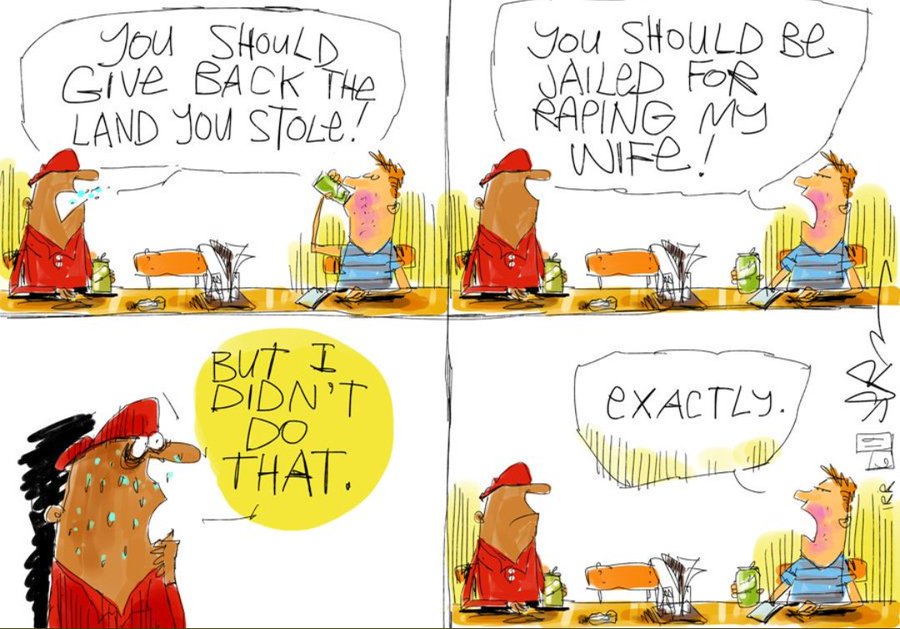 The cartoon depicts a black man, seemingly in EFF regalia, who tells a white man to “give back the land you stole”.

In turn, the white man accuses him of raping his wife, which he denies, looking shocked.

The second man then replies: “Exactly”.

Some have not taken kindly to Zille’s latest Twitter foray, claiming that, as a public figure and leader, she was breaking bridges rather than building them.

Others defended the general message of the cartoon against generalisations.

Zille defended the cartoon in subsequent tweets, saying both generalisations in the cartoon were wrong.

I sometimes ask myself whether they know their history or they believe the lies that have been used by colonialist settlers to justify the land dispossessed of their ancestors using myths such as empty lands, title deeds and treaties.

Why waste time on a dinosaur in a digital age? Helen Zille has an exaggerated sense of self impirtance. Whats left there is a bitterness and venomous attitude that far outstrips any normal person's intellect and emotional balance.

But Helen, we obviously know that white individuals right now did not physically steal land.

But the fact is that people were forcefully removed from land. Like King Sekhukhune of the BaPedi, who was literally kicked out of the Witwatersrand area with his people.

But who did the Bafokeng and Manala people themselves conquer when they first moved into the area? That's a question in principle, in the context of this line of argument that 'conquered land is stolen land'. I just don't think it's a solid argument …

Until you certain, refrain from assuming that all humans have a European approach(forcefully remove natives from their lands & claim it was empty) to land.

Meneer Malatji rapists will be arrested by police or community will deal with them decisively, The land issue is complicated because they stole the land after that they greated and give themselves title deeds. Our parents never used this things called title deeds. Focus boss