Russian mercenaries and military hardware have arrived in Mozambique to help the government fight jihadists in the latest example of an African country turning to Moscow for help.   The contingent of about 200 soldiers, including elite troops, three attack helicopters and crew in the southern African state reflects the Kremlin’s increased influence on the continent.      Those dispatched are said to include troops working for Wagner Group, the privately owned Russian military group that has been involved in. 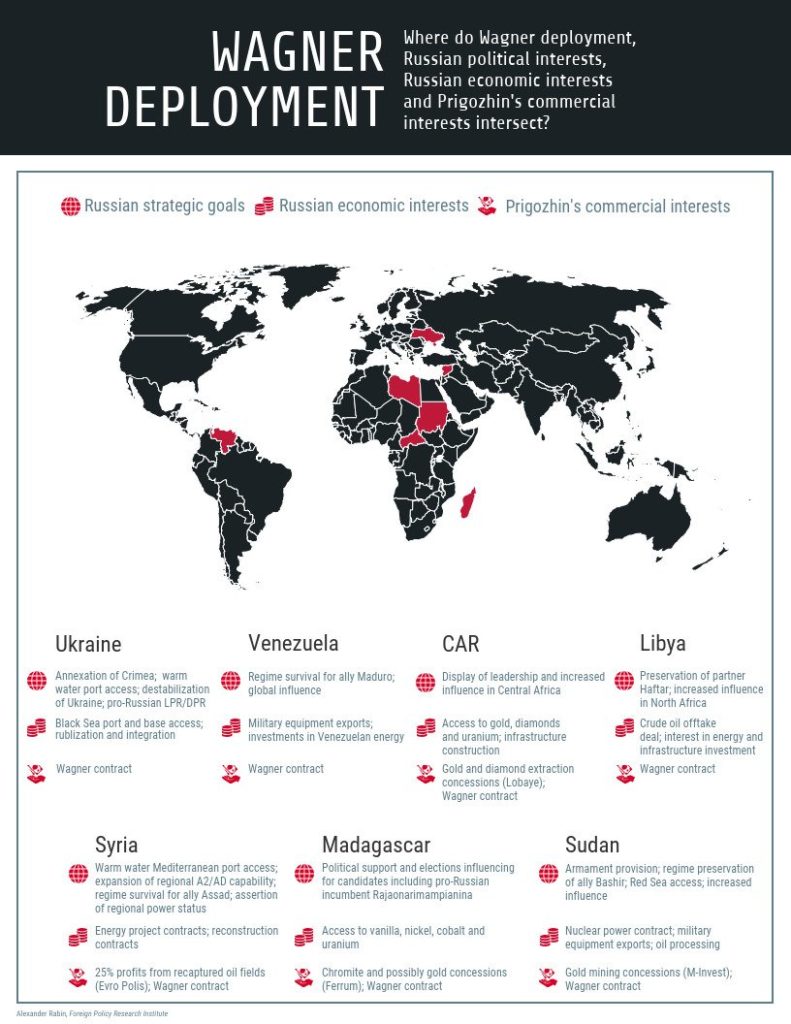 The Russians will provide training and combat support in the province of Cabo Delgado, which has been hit by a wave of atrocities.

The Russian firm Wagner Group, a shadowy mercenary outfit waging secret wars on the Kremlin’s behalf from Ukraine to Syria to the Central African Republic. Born out of a need for plausible deniability in Moscow’s military operations abroad, Wagner contractors were at the forefront of some of the heaviest fighting in eastern Ukraine and Syria in recent years before exploding into the headlines with their brazen assault on a U.S. military position in northeast Syria in February 2018.     Wagner seemed to herald a new reality, one in which it would form the spearhead of an aggressive new Russian policy abroad. But Wagner may be less influential than it seems.

It was revealed in the article that Yevgeny Prigozhin, was referred to as President Vladimir Putin’s “chef” who is believed to lead Wagner, ordered the assault after conversing with several Syrian business colleagues. (Prigozhin also controls a company with oil and gas stakes in the region.) Prigozhin himself has been sanctioned by the U.S. Treasury Department for his role in Russia’s 2016 U.S. election interference several times, most recently on 30 September.

The Rise and Fall of a Russian Mercenary Army

Russia increases its involvement in Africa.  Wagner operations have expanded across the continent, where it protects Prigozhin’s investments.   The source of Wagner’s funds remains unclear, with only anecdotal evidence offering insight. Prigozhin apparently diverted significant revenue from his construction and catering contracts to establish Wagner. The company’s annual costs, reportedly totaling up to $150 million around 2016 in Syria alone, require funding beyond the reasonable capacity of Prigozhin’s logistics businesses.

Diplomacy and Dividends: Who Really Controls the Wagner Group?

The St. Petersburg-based website Fontanka reported that about 3,000 Russians under contract to the Wagner group have fought in Syria since 2015, months before Russia’s two-year military campaign helped to turn the tide of the civil war in favor of Syrian President Bashar Assad, a longtime Moscow ally.
https://www.apnews.com/7f9e63cb14a54dfa9148b6430d89e873

Russia has signed various military agreements on the African continent.  In the past decade, it has grown its trade with the continent to $20.4 billion in 2018 from $5.7 billion in 2009.  Russia will look to sign more military deals, including one recently announced with Nigeria to fight Boko Haram, as well as oil and gas and mining contracts with targeted countries including Madagascar, Mozambique Zimbabwe, Sudan, and South Sudan.

Russia’s interest, like those of other major world powers in Africa, “involves arms exports, imports of natural resources, and the projection of power,” writes Jakob Hedenskog, researcher at the Swedish Defence Research Agency.

It has accelerated its diplomatic, military and economic push by building upon its former Soviet ties, when it armed anti-Apartheid and anti-colonial movements like those in Angola, Mozambique, and Algeria.

While Russia is Africa’s top arms supplier, nearly 80% of the weapons it sells the continent are directed to its longtime ally Algeria, who have relied on Russian equipment since their independence war against France in the late 1950’s. Its economic plans for Africa include lucrative oil and gas, mining and nuclear energy deals across the continent.

The US military has outposts in 34 African countries and had at least 33 active missions in 2017, according to journalist Nick Turse. This includes special forces fighting covert wars in Libya, Somalia, Tunisia, and Niger, with little to no accountability to the US Congress or the broader American public.

The mission to increase Russian influence on the continent is being led by Yevgeny Prigozhin, a businessman based in St Petersburg who is a close ally of the Russian president, Vladimir Putin. One aim is to “strong-arm” the US and the former colonial powers the UK and France out of the region. Another is to see off “pro-western” uprisings, the documents say.

Yevgeniy Viktorovich Prigozhin is a Russian oligarch nicknamed “Putin’s chef” because of his closeness to the Russian president and his career in the food and restaurant industry. He caters Vladimir Putin’s “state dinners with foreign dignitaries” and provides meals for both Russian schools and the military.

Russian businessman Yevgeny Prigozhin, in a dark suit, second from right, attends a meeting involving top Russian defense officials and members of Libya’s National Army in Moscow on Nov. 7, 2018. The photo is taken from a video released by the Libyan National Army.

Given the increasingly crowded LNG market, Mozambique must minimise delays in developing its projects if it is to gain from the existing dynamics of the market. The slow progress in bringing the LNG projects online has so far done little, however, to improve its economic situation, particularly given that Mozambique defaulted on loans worth US$2 billion ($2.7 billion) in 2017.
Anadarko’s Palma Afungi LNG plant in Northern Mozambique

The governor of the then district of Cabo Delgado, traveled to Mueda, escorted by a platoon of Portuguese soldiers, who ordered them to hide on the banks of the Chudi river near the site of the concentration.
Renamo Mozambique