Syrian President Bashar al-Assad waded into the Jeffrey Epstein case, telling an interviewer that the deceased financier, sex offender, and alleged sex trafficker did not commit suicide, but was murdered as part of a coverup of the misdeeds of high-profile figures in the western world. 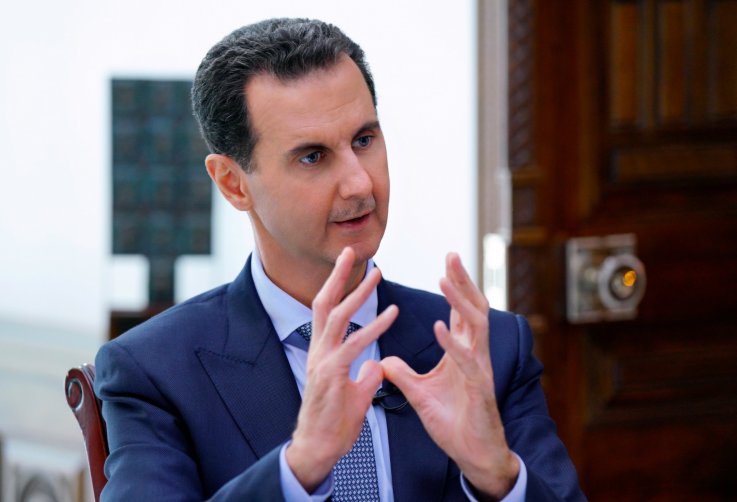 In a conversation with Russia’s state-run Rossiya-24 station Thursday, Assad related Epstein’s case to the recent passing of Syria Civil Defense co-founder James Le Mesurier, who died last Monday after an apparent fall from his apartment in Istanbul, Turkey.

Speaking to Russia’s state-run Rossiya-24 station Thursday, Assad commented on the death of Syria Civil Defense co-founder James Le Mesurier, who died Monday after an apparent fall from his Istanbul apartment. Assad and his supporters have repeatedly alleged that Le Mesurier’s organization, commonly known as the White Helmets, were not a rescue group but militant operatives working on behalf of his foes, including the United States and the United Kingdom, which he speculated—without providing evidence—may have been behind a spat of apparent assassinations.

Le Mesurier’s death has also prompted talks of conspiracy. Just three days before he was found dead, the Russian Foreign Ministry—an ally of the Syrian government—cited spokesperson Maria Zakharova as calling Le Mesurier “a former agent of Britain’s MI6, who has been spotted all around the world, including in the #Balkans and the #MiddleEast.” It alleged he had “connections to terrorist groups were reported back during his mission in #Kosovo.”

While Le Mesurier did serve in the British Army from 1990 to 2000, there has been no public record of him working with the U.K.’s Secret Intelligence Service. The White Helmets—the subject of an Academy Award-winning 2016 documentary—have long defended their record as rescue workers who “operate in the most dangerous place on earth and have saved more than 100,000 lives over the past five years,” doing so “regardless of their religion or politics.”

Le Mesurier was a British Army officer in the 1990s who also worked with the United Nations peacekeeping force in the former Yugoslavia and was director of the non-profit Mayday Rescue Foundation, which trains and equips volunteer emergency first responders.

It was the Mayday Rescue Foundation that provided the primary support and training to Syria Civil Defense, commonly known as the White Helmets, when it was founded in 2014 during the Syrian Civil War.

According to Assad and his supporters, the White Helmets are not the rescue group they claim to be, but a group of militant operatives working on behalf of his enemies in the United States and United Kingdom. The Syrian leader speculated that the White Helmets were behind Epstein’s death in a U.S. federal prison in August.

“American billionaire Jeffrey Epstein was killed several weeks ago, they said he had committed suicide in jail,” Assad said. “However, he was killed because he knew a lot of vital secrets connected with very important people in the British and American regimes, and possibly in other countries as well.”

And now the main founder of the White Helmets has been killed, he was an officer and he had worked his whole life with NATO in Afghanistan, Kosovo, Iraq and Lebanon. Both of us know that they [representatives of the White Helmets] are naturally part of Al-Qaeda. I believe that these people, as well as the previously liquidated [Osama] bin Laden and [ISIS leader Abu Bakr] al-Baghdadi had been killed chiefly because they knew major secrets. They turned into a burden once they had played out their roles. A dire need to do away with them surfaced after they had fulfilled their roles.

Three days before he was found dead, the Russian Foreign Ministry cited spokesperson Maria Zakharova as calling Le Mesurier “a former agent of Britain’s MI6, who has been spotted all around the world, including in the #Balkans and the #MiddleEast” and alleged he had “connections to terrorist groups were reported back during his mission in #Kosovo.”

As TNA has previously noted, Epstein was a member of exclusive globalist groups such as the Council on Foreign Relations and the Trilateral Commission and had ties to members of the international intelligence establishment. He was friends with a number of notable political leaders and celebrities, including former U.S. President Bill Clinton and the U.K.’s Prince Andrew. Epstein also had a habit of wiring his homes with video equipment and bragged about having dirt on the rich and powerful, suggesting a high-level blackmail operation.

What is known is that Epstein was a member of the Council on Foreign Relations (CFR) and the Trilateral Commission, both of which have an agenda of one-world government and serve as recruiting grounds for the intelligence community, along with all sectors of government — including cabinet positions and the presidency itself (Richard Nixon was CFR; Jimmy Carter and George H.W. Bush were Trilateral Commission.)   Epstein was also on the board of the Rockefeller Institute. It was largely Rockefeller money that founded the CFR in 1921. Many of the founding and early members of the organization were business associates of John D. Rockefeller.

The Trilateral Commission was founded by David Rockefeller (grandson of the original John D.) in 1973 while he simultaneously served as CFR chairman.   Epstein’s elite associations have led some to speculate that he manages Rockefeller money, although the wealthy family denies the relationship.   In fact, little is known of how Epstein actually makes his money. He has claimed to only take on clients with a worth of over $1 billion. But Epstein’s only known client is Leslie Wexner, the retail mogul whose company, L Brands, owns Victoria’s Secret, Bath & Body Works, and other major brands (though Wexner allegedly deserted Epstein following the 2006 legal proceedings).

There is speculation that Epstein was running a blackmail operation. This belief is based partly on the fact that his homes were wired with cameras, as well as his mysterious interactions with the rich and powerful—including flying the likes of Bill Clinton and disgraced actor Kevin Spacey on his “Lolita Express” Boeing 727 (Clinton allegedly unaccompanied by his secret service detail on several occasions).

Former U.S. Labor Secretary Alexander Acosta told members of the Trump transition team that the reason he cut Epstein a favorable non-prosecution plea deal during the money man’s first ordeal back in 2007 was because Epstein “belonged to intelligence.”

Epstein’s international connections have prompted an overseas look at his dealings. French police last week launched a new appeal for witnesses and victims of the financier to come forward.

“Given the complexity of the case and its international implications, we are once again asking victims and witnesses to come forward,” the appeal said. It also urged “anyone with information to come forward, regardless of when the incident occurred, what the circumstances were and who was involved.”

The appeal came after women who claimed to have been raped by Epstein associate Jean-Luc Brunel, a French modeling agent, expressed disappointment with the limited scope of police efforts.

Meanwhile, Prince Andrew, Queen Elizabeth II’s second son and eighth in line to the British throne, last week engaged in an interview about his relationship with Epstein.

The royal took heat for not showing empathy to Epstein’s victims and for saying that he did not regret his friendship with the deceased sex offender, maintaining that he met many people and learned many things through his relationship with Epstein.