Sarah Ransome claims Epstein sex-trafficked her in 2006 and 2007 and that, like Giuffre, she was also forced to have sex with Epstein’s lawyer, Alan Dershowitz (which he has denied). “The news of my abuser’s arrest today is a step in the right direction to finally hold Epstein accountable for his crimes and restore my faith that power and money can’t triumph over justice,” Ransome told CBS News. 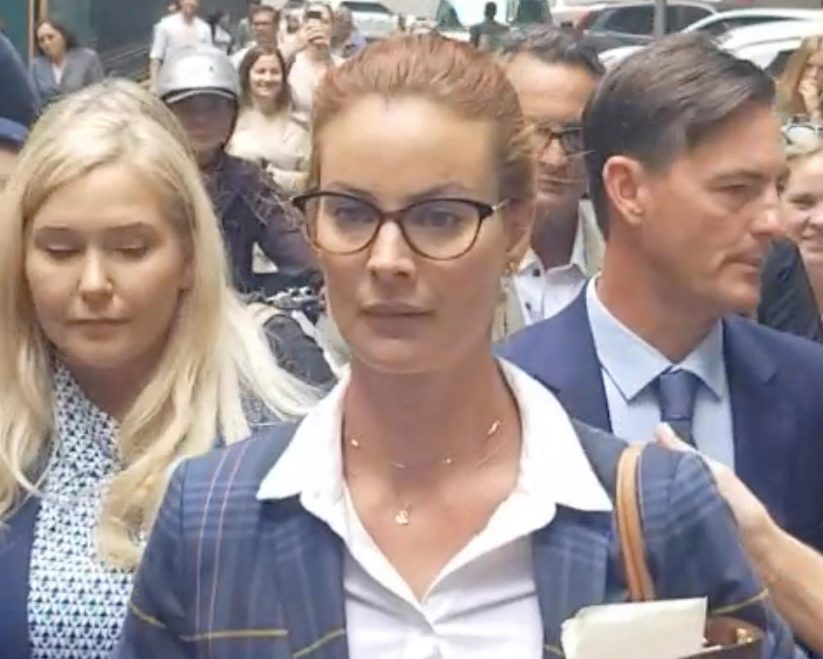 Wild and Michelle Licata, another accuser of Epstein, were in the courtroom on Monday during Epstein’s arraignment hearing. Licata told Good Morning America that she cried when she saw the financier appear in court.   “I don’t think anyone has been told the truth about what Jeffrey Epstein did,” Licata told the Miami Herald in 2018.

“He ruined my life and a lot of girls’ lives. People need to know what he did and why he wasn’t prosecuted, so it never happens again.”

A VICTIM of shamed tycoon Jeffrey Epstein has told how she tried to swim across shark-infested waters to escape his notorious “Paedo Island”.  Desperate Sarah Ransome  claimed she made her dramatic escape bid after she was suffering multiple rapes on Little St James in the Caribbean.

“I had been raped three times that day,” she said. “A shark would have been my best friend at that point. I didn’t even think about it – it was just, get me away.”  Ms Ransome told how she jumped on a quad bike to get away and planned to drive to a beach to swim to the safety of nearby St Thomas.  However, she told the Telegraph she was spotted by Epstein’s security cameras and intercepted in a bid to get her to return to Epstein’s luxury home.

Sarah Ransome, who now lives in Barcelona, claimed that she was recruited and trafficked for sex by the pair in 2006 and 2007 — at the same time that Epstein, a wealthy New York hedge fund manager, was under federal investigation for molesting dozens of underage girls at his Palm Beach mansion.

He didn’t believe 13 underage girls, never speaking to them or their parents

Despite Krischer’s fixation with the MySpace pages, Recarey pressed on in the spring of 2006, juggling phone calls from anxious victims and their parents with his efforts to persuade prosecutors to file charges.

Then, he said, Krischer and his prosecutors stopped returning his and Reiter’s calls. Tired of being left in the dark, Recarey visited the State Attorney’s Office in April to find out what was happening.

That’s when he learned Krischer had agreed to let Epstein plead guilty to felony aggravated assault. Under the proposed deal, Epstein wouldn’t be jailed and, if he complied with the terms of probation, his criminal record would be erased.

Recarey was incensed that prosecutors hadn’t consulted police before offering Epstein such a lenient deal. They asked Recarey to draft an arrest warrant, but two weeks later, he still had heard nothing.

So, he put together an arrest warrant charging Epstein with four counts of unlawful sexual activity with a minor and one count of lewd and lascivious molestation. The charges, punishable by maximum 30- and 15-year sentences, respectively, could have sent Epstein to prison for decades.

Again, Recarey’s efforts were greeted with silence from Krischer’s office.

On May 1, 2006, a frustrated Reiter asked Krischer to step down from the case.

In a June 22, 2006, letter, Goldberger reminded Krischer that they both recently had concluded that no sex occurred between Epstein and the 14-year-old.

“As you know, it was only at the June 1, 2006 meeting, after eight months of investigation that you and I both learned, for the very first time, and I believe to our collective disbelief, that the allegation of the girl did not raise the slightest hint of actual sex,” Goldberger wrote.

Yet the girl had always alleged fondling. Clad only in her bra and thong, she said, Epstein put a sex toy in her vaginal area and masturbated in front of her during the “massage.”

Ignoring those disturbing details, Goldberger reminded Krischer that Epstein had paid for and passed a polygraph exam, confirming that no sex had occurred and that the girl had told Epstein she was older than 18.

Accused sex traffickers Jeffrey Epstein and Ghislaine Maxwell have settled a federal civil lawsuit filed by a woman who says she was ordered under threat of violence to have sex with them and other influential individuals when she was in her early 20s, sources confirmed Wednesday.

Dershowitz, 80, told the Miami Herald that he has never met Ransome nor has he ever had sex with her. He accused Ransome’s attorney, powerhouse lawyer David Boies, of inventing the story and using her and another woman, Virginia Roberts, to frame him. Roberts asserted in a federal court affidavit in 2015 that Epstein forced her to have sex with Dershowitz when she was 16 years old.

“I am the victim. David Boies and these women are the perpetrators,’’ Dershowitz said. “They have willfully and deliberately concocted stories in order to make money — millions and millions of dollars. And I will not rest until the entire story comes out,’’ said Dershowitz, a professor at Harvard Law School and frequent Fox news guest commentator.   Nowhere in the court case or the transcript does Ransome or anyone else allege that Ransome had sex with Dershowitz — only that she was directed to.

The Ransome settlement, which is confidential, comes two weeks after Epstein settled another lawsuit in Palm Beach, filed by an attorney who represented several women who said they were coerced into sex acts with Epstein when they were underage. As part of the settlement, Epstein, 65, issued an apology to Fort Lauderdale attorney Bradley Edwards, admitting that he leveled false claims in a lawsuit as part of an effort to intimidate Edwards into abandoning his aggressive advocacy for the women, who are now in their late 20s and early 30s.

The developments follow a series of stories published by the Miami Herald in late November that detailed how state and federal prosecutors worked with Epstein’s lawyers to conceal the extent of Epstein’s crimes, and secretly negotiated an unusual plea agreement that allowed him to escape federal sex trafficking charges that could have sent him to prison for life. The agreement, by design, was kept from his victims so that they could not appear at his sentencing.