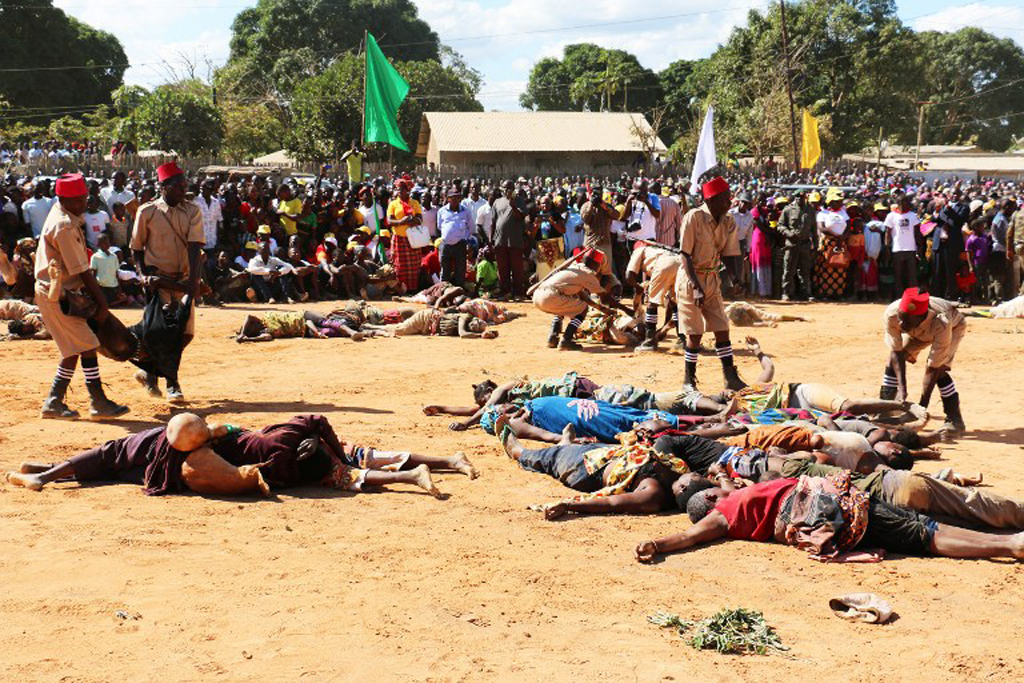 * Alex Vines is head of the Africa Programme, Chatham House and co-director of the African Studies Centre, Coventry University. He has just co-authored the report Mozambique to 2018 (Chatham House).

2015 – The fall of Guebuza echoes, in party, that of Thabo Mbeki at Polokwane in 2007. But more than aloofness and the arrogance of power explain Guebuza’s demise.    Mozambique in recent years has discovered world-class gas reserves which are predicted to make it the seventh largest gas producer in the world.   By Mozambique’s 50th anniversary of independence in 2025, this gas will have been harnessed and will be reaching export markets, including South Africa.

This will be a game changer, with massive infrastructure deals and development scheduled now for northern Mozambique.   One of the reasons Guebuza wanted to hang onto the party leadership was because of this – and the business opportunities that it offered.   Likewise, the renewed targeted armed violence by Renamo veterans and government forces in central Mozambique between April 2013 and July 2014 was also partly about trying to get a cut of the gas action.

Expectations of wealth have risen dramatically across Mozambique as its politicians have talked-up finds of gas, coal and even oil (although the oil discoveries are far from proven to be significant).   Overlap this with a dramatic regional asymmetry, with Mozambique&39;s most populous provinces such as Zambezia and Sofala having the worst poverty indicators and you see why there has been resurgent opposition.

Inequality and a lack of government service delivery have boosted Renamo’s fortunes in four provinces.   And the other significant opposition party, the Democratic Movement for Mozambique (MDM) runs three major cities, Nampula, Quelimane and Beira.

In the 2013 municipal elections it won over 40 percent of the vote in former Frelimo heartlands in Maputo city and Matola.   Guebuza had often tried during his two terms to strengthen Frelimo across the country. But sometimes too forcefully.  He was not helped by growing inequality and an increased sense that a Frelimo elite around him were growing increasingly aloof and wealthy.   But Guebuza’s tough line against Renamo proved to be a tactical blunder.

It contributed to cornering Renamo’s leader Afonso Dhlakama and convinced him to resume targeted armed violence after 20 years of peace.     Although Guebuza had hoped military action would end the Renamo threat, Mozambique’s security forces were too weak to prevail and so negotiations were needed to reach a new ceasefire.

Some observers believe Renamo’s better results in previous years’ elections was as a reward from the electorate for its violent resistance to Frelimo, but it is more complex. Frelimo itself thinks that it did not campaign well, and was not helped by Gubueza already being lacklustre in his support for Nyusi during the election campaign.   Renamo credits its better performance to its having reduced electoral fraud by successfully politicising the election machinery – by persuading Frelimo to replace “independent” electoral commissioners with party representatives.

The Dhlakama finally showed he could be a real politician and he campaigned impressively for the first time, giving good speeches and convincing voters in key provinces such as Nampula and Zambezia that he could win and thereby persuading voters from Frelimo and MDM to return to Renamo.

The point is that getting the politics right is really important for Mozambique. After the celebrations of 40 years of independence, Mozambicans politicians will need to learn much more from past mistakes.   The country is changing quickly and big national decisions will need to be made about gas and other developments.   Inequality and finding inclusive growth need to be central to these plans – not narrow elite enrichment.   has appointed a good new technocratic government and, having won over Guebuza, will in coming months become stronger.

This is the moment for brave politics, sitting down with the opposition and hammering out structures that can help develop the country, such as accountable devolved provincial government.    A successful Mozambique is important for the region, especially South Africa, which will benefit from Mozambican gas and electricity exports.   But stability and economic success would also prove that the decades of international humanitarian support and international development assistance have not been wasted.

Post-conflict countries need many decades of nurturing and politics can derail good gains – Burundi is a good reminder of that.   As Mozambique celebrates 40 years of independence, I hope its politicians reflect on how to do better politics.   Experience shows that – in general – good things happen slowly, while bad things can happen fast.

Over these past 40 years, Mozambique has been presided over by four presidents: Samora Machel, Joaquim Chissano, Armando Guebuza and since his swearing in this January, Filipe Nyusi.

As the number of Mozambicans fleeing to Malawi continues to grow, UNHCR is calling on all parties to respect their right to seek asylum amid signs of pressure to return. More than 6,000 have…

It fought against the FRELIMO in the Mozambican Civil War and against the ZANU movement led by Robert Mugabe from 1975 to 1992.

RENAMO was founded in 1975 following Mozambique’s independence as an anti-Communist political organisation, sponsored by the Central Intelligence Organisation of Rhodesia.

André Matsangaissa, an ex-FRELIMO army commander, was its first leader.

The Ian Smith administration in Rhodesia sought to prevent the FRELIMO government from providing a safe haven for Zimbabwe African National Union militants seeking to overthrow the Rhodesian government.

Matsangaissa was killed by government soldiers on 17 October 1979 in Sofala Province.

During the Mozambican Civil War of the 1980s, RENAMO also received support from South Africa.

In the United States, the CIA and conservatives lobbied for support to RENAMO, which was strongly resisted by the State Department, which would “not recognize or negotiate with RENAMO”.

The British government under Margaret Thatcher did not view the civil war in Mozambique as a part of the Cold War, and when FRELIMO closed the border to Rhodesia it fitted well with British interests against the rebel colony while the Rhodesian government supported RENAMO.

The Mueda Massacre, which occurred on June 16, 1960, was one of the last episodes of the resistance of Mozambicans to colonial oppression, before the outbreak of the National Liberation Armed Forces.

On that date, a meeting was held between the population of the present district of Mueda and the colonial administration, which ended with the massacre of more than five hundred Mozambicans by the Portuguese colonial troops.

The meeting was called for by Mueda’s population who tired of forced labor, violence, and repression, sought a means to end the plight of life. To this end, a delegation composed of Faustino Vanomba, Kibiriti Diwani and Modesta Yusu, was exposed to the Mueda administrator, the demands of the population.

In the presence of the administrator, the delegation reported on the plight of the people, particularly as regards the compulsory cultivation of cotton. They also referred to the occupation of the fertile lands by the settlers and the expulsion of the Mozambicans to the arid and unproductive areas.

After listening to the concerns of the Mueda population, the colonial administrator, did not give an immediate answer, it would happen only in four days, as he would discuss the matter with his superior in Port Amelia, now the city of Pemba. After meeting with the chief, the administrator of Mueda spread his sepoys throughout the plateau region and invited the population to be present in front of the Administration Secretariat, on June 16, according to him, very important matters would be resolved.

However, the administrator had ordered that trenches be opened around the administration’s secretariat. On this date, the governor of the then district of Cabo Delgado, traveled to Mueda, escorted by a platoon of Portuguese soldiers, who ordered them to hide on the banks of the Chudi river near the site of the concentration.

In his address, the governor sought to convince the population to abandon the idea of ​​independence. The speech was systematically interrupted by the shouting,   “Independence! Independence! We want independence. “

The environment generated was not consensual, so the administrator suggested that a representative group should discuss it with the secretary. As soon as the group arrived, their members were handcuffed and then forcibly taken to a car that was prepared to take them.

As soon as these words were spoken, the governor shouted, “Fire!” The fire of the rifles, machine guns and the thunder of the grenades. In the ten minutes that followed, shortly after five o’clock in the afternoon, more than 500 Mozambicans were slaughtered by the forces of colonial repression. The Mueda massacre taught a hard lesson to the Mozambican people.

Those who had until then had the illusion that it was possible to conquer Independence by peaceful means, learned from the brutality and violence in Mueda, that armed struggle would be the only possible way to achieve our Freedom.