Russian businessman Yevgeny Prigozhin, in a dark suit, second from right, attends a meeting involving top Russian defense officials and members of Libya’s National Army in Moscow on Nov. 7, 2018. The photo is taken from a video released by the Libyan National Army. 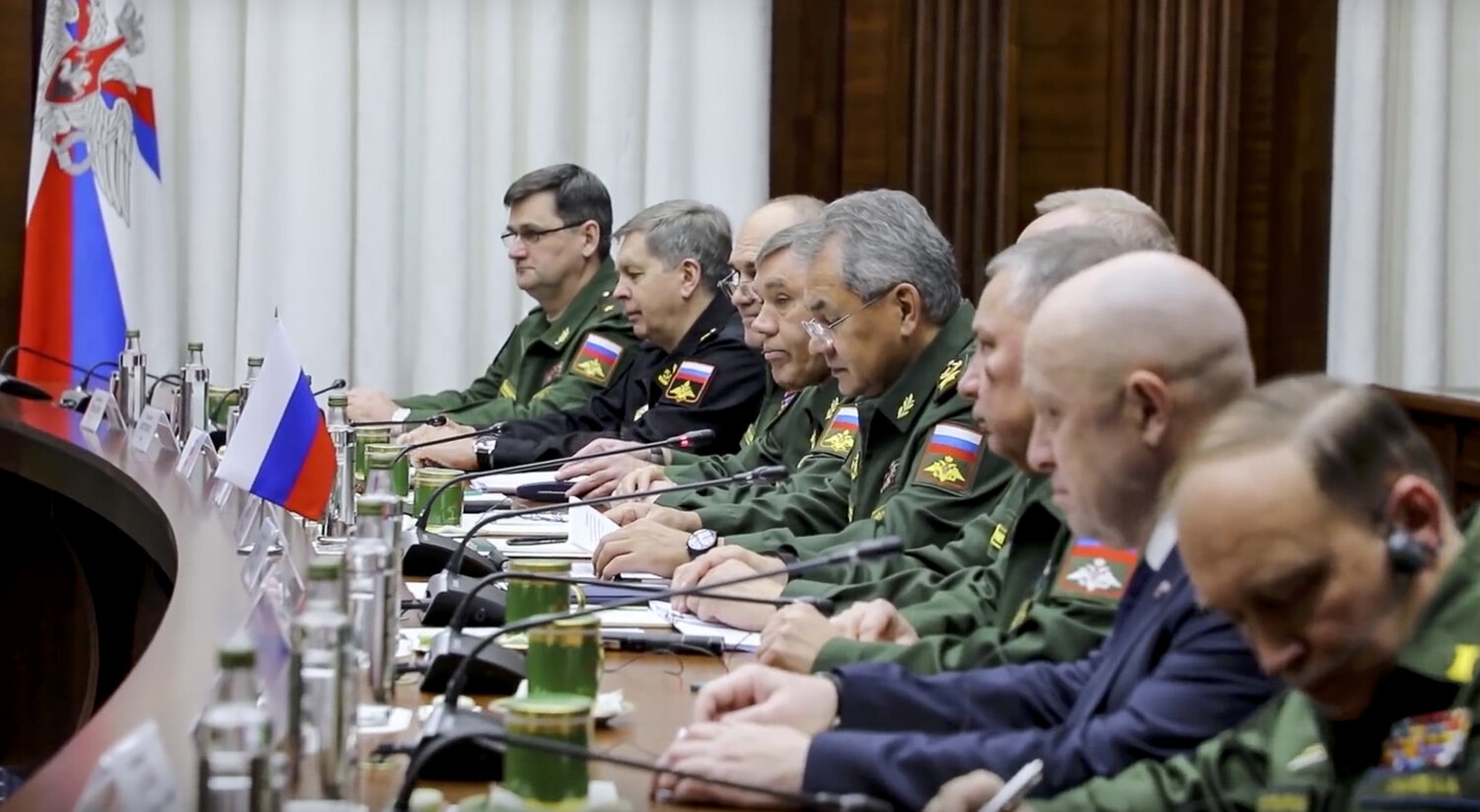 “They are hired mercenaries who fight for money,” Kofman said of the Wagner fighters. He said the mercenaries are allowed to keep a percentage of what they capture, and that’s why they targeted the oil facility.

“They thought they’d take it and the thing turned out to be a fiasco,” he said.

Kofman and other analysts see Prigozhin as the man funding these ventures, though he may not be involved in the details. In addition, it’s not clear how much guidance the Kremlin provides, but it may be limited to some general guidelines, according to analysts.

Simes, meanwhile, notes that many rich businessmen in Putin’s orbit are often described as “oligarchs.” He disagrees with this label, saying it suggests they have real political power, which they don’t in Putin’s Russia.

Because Prigozhin and others like him are not formally part of the government, the Kremlin can distance itself and deny they are acting on behalf of the Russian state.

However, the U.S. government has shown a strong interest in Prigozhin.

The Treasury Department sanctioned him in 2016 for supporting Russia’s military occupation in Ukraine.

Robert Mueller’s team indicted him last February, saying he used his catering company to fund the Internet Research Agency, which interfered in the 2016 election.

There’s virtually no record of Prigozhin speaking publicly. But he did comment on the indictment, telling Russia’s state-run Ria Novosti news agency, “Americans are very impressionable people. They see what they want to see. If they want to see the devil — let them see one.”

There was a rare sighting in November, when a Libyan military delegation met their Russian counterparts in Moscow. A video of the meeting shows everyone in a military uniform — except one Russian, who’s conspicuously wearing a business suit.

The man is Yevgeny Prigozhin.

And in the latest twist, Reuters reports that hundreds of Russian mercenaries are now in Venezuela supporting Nicolás Maduro, the embattled president. The Kremlim denies this.

View at Medium.com
On November 7, 2018, Russia’s defense minister Sergei Shoigu together with other high-ranking Russian generals met with Khalifa Haftar, commander of his self-styled Libyan National Army (LNA). The official purpose of the meeting was to discuss the ongoing armed crisis in Libya and the security situation in the region, but the meeting likely had a more specific agenda, which explains Prigozhin’s attendance. Prigozhin does not serve the Russian government in an official capacity, and his presence at the meeting was not reported by the Russian Ministry of Defense.

Open source evidence revealed that Yevgeny Prigozhin, who is closely linked with the Wagner mercenary group, attended a meeting between Russian and Libyan military officials. Prigozhin’s presence at the meeting was not reportedby the Russian Ministry of Defense.

This observation serves as a sign that Wagner mercenary group has an interest in the Libya. Although open source evidence proving Wagner’s presence in Libya are currently scarce, it is likely only a matter of time before it will surface.

It is another example of the service that the Wagner Group provides to the Kremlin by conducting kinetic military operations to serve Russian interests, while simultaneously providing deniability for those operations to the Kremlin. Prigozhin’s presence at an official bilateral meetings of the Russian Ministry of Defense makes the connection explicitly clear.

The two known Russian bases in Libya are located in the cities of Benghazi and Tobruk.

An undisclosed number of Wagner mercenaries are allegedly already based in Libya, but the open source evidence to back-up these claims is scarce.

According to Western sources, however, Moscow is actively participating in hostilities on the side of Field Marshal Khalifa Haftar (the Libyan National Army) by supplying his forces with S-300 (NATO classification: SA-10 Grumble) surface-to-air missile systems, Kalibr surface ship- and submarine-launched cruise missiles, as well as by deploying “members of the Wagner PMC [private military company] to Tobruk and Benghazi” (Newsru.com, October 10). Construed by the Russian side as “another [example of] Western-generated fake news,” this information has, nevertheless, been partly corroborated by reputable Russian mass media outlets (through unnamed sources close to the Russian Ministry of Defense as well as Libyan authorities) that confirmed Russia’s expanding military presence in the country. Among other things, various reports note that “Russian elite airborne forces have been transferred to the theater from the Moscow region for several months now.” Crucially, the source stated that “Russian interests are, in addition to other aspects, specifically concerned with oil and natural gas” (Novaya Gazeta, October 9). This is a development of critical importance: previous accounts of “Russian special operations forces” present in Libya appeared in Western sources (Reuters and France Presse) in 2017, but were mainly said to be operating from the Egyptian city of Sidi Barrani, located some 95 kilometers from the Libyan border (Kavkazr.com, October 7, 2017). Thus, if correct, the presence of Russian PMCs and special forces based inside the country signifies a major shift in the Kremlin’s “Libyan gamble.”
https://jamestown.org/program/lev-dengov-ramzan-kadyrovs-middleman-in-libya/

Russia does not hide its goals in Libya: control of the region, return of influence, oil, ports, two military bases

Russia is strengthening its military presence in Libya and supplying weapons to the militia – the Libyan National Army (LNA), Marshal Khalifa Haftar, who in Moscow is considered the real contender for the place of the late Libyan dictator Muammar Gaddafi. Haftar, who controls the eastern part of Libya, has visited Moscow several times over the past few years to meet with the heads of the Russian Foreign Ministry and the Ministry of Defense, as well as the Secretary of the Russian Security Council. And he received the consent of the Russian Federation to arm his units, as well as for the supply of weapons in the amount of $ 2 billion in exchange for 2 military bases .

And the construction of the buildings was commissioned by an obscure private company, Megalain, without the publicly available paper trail that is legally required for projects funded by public money.

Megalain is a firm linked to Russian businessman Yevgeny Prigozhin, who has appeared on a U.S. sanctions blacklist for his dealings with the Russian defence ministry.

But the secrecy surrounding the purpose of the buildings erected on defence ministry land is an example of how companies involved in the covert campaign in Syria, where private fighters support Russia’s military, camouflage their activities.

Reuters has documented over several years how private combatants are fighting and dying in Syria, and that they are using logistical support and infrastructure provided by the Russian defence ministry.

Russian officials have previously denied that these fighters have any connection to the state. They have said any Russians fighting in Syria on the government side are private citizens who are there as volunteers.

The buildings, completed in 2015, are on the territory of a Russian military intelligence base, and to gain access to it vehicles have to pass through a checkpoint manned by armed soldiers in defence ministry uniforms, Reuters reporters observed when they visited the site.

The existence of the buildings is disclosed in court documents seen by Reuters which describe a legal dispute between Megalain and a contractor called Sevzapstroi involved in the construction.

In its ruling, the court describes one of the buildings as a “pioneer camp” — a reference to Soviet-era summer vacation camps for children — and the other two buildings as temporary accommodation for the vacationers.

It cites an agreement between Sevzapstroi and TD Vivahaus, a sub-contractor on the project, as the source of the descriptions.

A manager from Vivahaus, a construction firm which court documents show was hired by Sevzapstroi to carry out some of the work, told Reuters it was required to fake the purpose of the buildings in official paperwork it filed relating to the project.

“We had an agreement with the client that we’d write it would be a beautiful pioneer camp near the Black Sea,” said the manager, who did not want to be identified because of the sensitivity of the issue.

He did not specify whether he was referring to his direct client Sevzapstroi or the ultimate client Megalain.

According to the court documents, Megalain transferred 86 million roubles ($1.4 million at the time) to contractor Sevzapstroi to construct the three buildings at Molkino.

Sevzapstroi has since ceased to exist and no one connected to the firm could be reached for comment.

At the time of the payment, Megalain was 50 percent owned by a company called Lakhta and 50 percent held by Concord Management and Consulting, according to Spark database, which collates official data on businesses from the tax service and the state statistics agency.

Concord Management and Consulting was majority-owned by Prigozhin from 2003-2011, according to the database.

At the time of the transaction with the Molkino facility, Concord was owned by Prigozhin’s mother. She is not listed any more. From 2017, Prigozhin himself became the owner again, the database showed.

The second Megalain co-owner, Lakhta, was founded in 2003 by Yevgeny Prigozhin, who at the time was the sole owner, the database showed.

Lakhta was owned from 2013 to 2018 by Svetlana Sobirova. She was sales manager of the Lakhta Park real estate project, which, according to Spark, is owned by Yevgeny Prigozhin’s wife, Lyubov.

Reached by telephone, Sobirova said she no longer works for Lakhta Park and declined to comment further. An employee of Lakhta Park said he could not comment and the firm did not respond to a written request for comment.

A manager for Vivahaus said on Thursday the firm could not comment because all the staff working in the company in 2015 had since left.

Reuters received no response to requests for comment sent to Prigozhin’s wife and mother, via Concord.