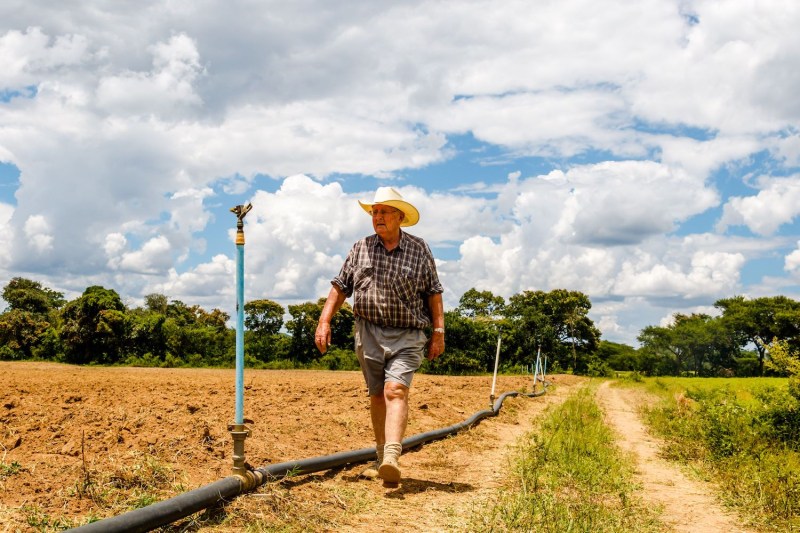 Robert Boswell, a white commercial farmer in Zimbabwe, lost 500 hectares of land during the country’s controversial land reform exercise in the early 2000s. More than 4,000 white commercial farmers like him were evicted from their farms in the violent and bloody land reform program that started in 2000, which then-President Robert Mugabe’s government argued was necessary to correct a colonial imbalance in which a few white farmers owned most of the country’s arable land.

Fewer than 300 white commercial farmers are estimated to have remained in agriculture, mostly as dairy farmers. Under Mugabe, who ruled the country from independence in 1980 until he was deposed through a military coup in November 2017, some white farmers were spared from the land acquisition program if they were dairy farmers—because dairy was considered a strategically important economic sector.

Boswell is one of the few lucky white farmers who retained some land, about 279 hectares, because he operated a dairy farm. “After our farms got taken, we decided to go into dairy. … Then we got the new dispensation—and you could survive on a farm without having a dairy farm as long as you were export-oriented,” Boswell said from his farm in Burma Valley recently. “We … decided to get rid of the dairy altogether after the new dispensation, and where we had the dairy, we are growing macadamias and coffee.”

Today, Boswell, 50, is among some white commercial farmers relishing a climbed-down land reform position under President Emmerson Mnangagwa, who rose to power first via a coup and then through a disputed democratic election in July 2018.

Mnangagwa has publicly said white farmers are free to apply for land because landholding was no longer based on a person’s skin color but on one’s ability to produce. While the decision is influenced by the need to ensure that farm land is productively utilized, it also reveals ideological differences between Mugabe and Mnangagwa.

In July, his cabinet stopped the eviction of a Chipinge commercial farmer, Richard Le Vieux, an exporter of coffee and avocados to Europe. Manicaland’s provincial minister, Ellen Gwaradzimba, had ordered Le Vieux off his farm so she could give the farm to her son until the central government intervened. Sporadic cases of land invasions still occur to this day.

Other changes include the extension of 99-year land leases to white commercial farmers, a benefit that was previously the preserve of black farmers. During Mugabe’s time, white farmers were given only five-year leases. (Farmland in Zimbabwe remains state property, and farmers rent the land.) After about two decades since the land invasions, the government has also begun in earnest to compensate white farmers and recently allowed black farmers to lease their farms.

Ben Gilpin, the president of the Commercial Farmers Union, which mostly represents the interests of white former farmers, said his union wants to see the lease process opened up and access to land given to all genuine productive farmers, not simply those on the land already but also those who would like to farm.

White farmers are skeptical about the bankability of the leases and argue that the leases, in their current structure, would not help farmers secure the kind of money they need to operate because banks require collateral and these leases can’t be used to borrow.

Although land compensation to white commercial farmers started under Mugabe, it was at best erratic. But in an overture that signals a departure from the past—because Mugabe dithered when it came to paying compensation—the new regime has undertaken to compensate white farmers in line with the country’s constitution, which says that “no compensation shall be payable for [agricultural land acquired for resettlement purposes] except for any improvements effected on such land before it was acquired.”

Gilpin said the new administration has so far taken a positive look at compensating white farmers and is administering an interim relief program benefiting nearly 850 former farmers. “It is taking a lot of time, but nonetheless it is appreciated,” he said. “The actual value of what is being paid is very small, but we hope it will lead to a comprehensive settlement of the overall process.”

Mnangagwa’s modification of the land reform policy is widely viewed as a desperate attempt by the regime to win the international support needed to set the crisis-ridden country on a path to recovery.

Mnangagwa and his allies clearly realize that it will not be possible to attract foreign investment without addressing land compensation. His government also recognizes that a restructuring of the land reform policy is necessary to shore up agricultural production, which fell significantly in the aftermath of the land reform, turning the country—once renowned as a breadbasket—into a basket case and a net importer of food.

According to Mnangagwa, the government estimates that it will have to pay the white farmers 3 billion new Zimbabwean dollars—which is approximately $300 million, calculated based on the official exchange rate of the RTGS (Real Time Gross Settlement) dollar, or “zollar,” which was declared the inflation-plagued country’s only legal tender in June. His government aims to pay an initial $5.3 million to the farmers this year, for improvements on the land only—and not the land itself. But the white farmers are holding out for at least $11.4 billion as a fair value for the land and properties seized from them. (The variance in the figures of what the government has committed to pay and what the white farmers expect to be paid arises from the fact that the compensation figure is still being computed by the two parties on an agreed method of valuation.)

The decision to compensate white farmers has meanwhile drawn the ire of hard-liners among the ruling party, the Zimbabwe African National Union-Patriotic Front.

The youth political commissar Godfrey Tsenengamu and Deputy Defense Minister Victor Matemadanda have spoken against the compensation of white farmers because they believe that land is the birth right of black Zimbabweans. They do not have much clout however, given that the military placed Mnangagwa in power.

Mnangagwa has broken another taboo. A few months ago, the government gave permission to about 245,000 black farmers, who acquired farms from the land reform program, to sublet or lease their farms, opening up opportunities for white and black farmers to form joint venture partnerships on the farms. The move is another volte-face in land reform policy from the previous administration, for which leasing was regarded as a reversal of revolutionary gains. Mugabe opposed the leasing of land to white farmers and on several occasions warned black farmers to stop the practice. To him, it was an admission of failure, and he hated being seen to depend on white agricultural expertise.

White farmers, according to Gilpin, have now embraced joint venture partnerships with black farmers, provided risk is shared equally between the parties and everyone puts something on the table. “At this stage, access to land remains effectively in the hands of those who have been allocated land, and very often these people are not using the land”—leaving it fallow, he explained. “We would prefer to see that land put back into the market so that those who can use it use it, rather than to be dependent on those who want a passive income from an asset they have not paid for.”

Zimbabwe needs  a policy that allows farmers to use the land as collateral to borrow, and that may mean farmers being given tittle deeds to their land. The farmers are also demanding full land compensation and protection of joint venture partnerships on the farms. Unless these requirements are met, the government’s efforts to revive agriculture will come to naught.

Indeed, the issues of collateral and title deeds apply to black farmers as well as white ones. Besides lacking expertise, many of the new black farmers also lack the financing needed to ratchet up production. Granting deeds and perhaps putting the land back on the market should be options. But the government will not compromise on compensation; it is only willing to compensate on farm improvements and not on the land. White farmers are only accepting this deal because most of them are desperate for the money. They aren’t the only ones.

The Mnangagwa government sees compensating white farmers and upholding property rights as ways to promote economic recovery and unlock development finance. But given the country’s liquidity challenges, the government may not be able to afford full compensation or funding for the exercise. The government is therefore hoping that in its reengagement efforts, Britain may honor the 1979 Lancaster House Accords obligation to compensate the farmers. Another option would be for the government to borrow the money or enlist donor and investment finance for compensation.

That will be a challenge. The new government, whose catchphrase has been “Zimbabwe is open for business,” faces an uphill battle winning global acceptance.

And even if it manages to resolve the many practical and economic challenges raised by land reform, it may not be enough.

Zimbabwe’s image has been seriously damaged by a gross human rights record, symbolized by the killings of 17 civilians in fuel protests in January and at least seven people in protests after the 2018 elections—as well as its continued crackdown on leaders of the opposition and civil society. Despite the appointment of former South African President Kgalema Motlanthe to lead a commission of inquiry into the post-election violence, no one has been prosecuted for the deaths, with the army denying responsibility, despite being accused of the killings.

In June, Tibor Nagy, the U.S. assistant secretary of state for African affairs, met with Mnangagwa at the U.S.-Africa Business Summit in Mozambique, where he stressed the urgent need to hold security forces accountable for acts of violence committed against Zimbabweans including in August 2018 and early 2019 and the importance of real political and economic reforms.

2008
Mr. Mugabee, in his 28th year of rule, is famous for his fight against white-minority rule in Southern Africa. He became the first black leader of Zimbabwe following its independence from Britain, although many now consider Mugabe an oppressor. VOA’s Chris Simkins has more on one of the world’s most enduring and complicated political figures

Feb 2018 – My Land, My Life is a journey into the heart of the Zimbabwean crisis, we get a glimpse into the complexities of a range of ordinary Zimbabweans and their understanding of their fast-changing political landscape. The film is a candid, but poetic critique of those who claim to represent the interests of the peasants and workers.

The Zimbabwean president, Robert Mugabe, has finally resigned following a military takeover. The 93-year-old has led Zimbabwe’s since independence from Britain. In recent years disastrous policies have led to hyperinflation, international sanctions and economic ruin

The Lancaster House Agreement was a political consensus which brought the independence of Zimbabwe from Rhodesian rule.